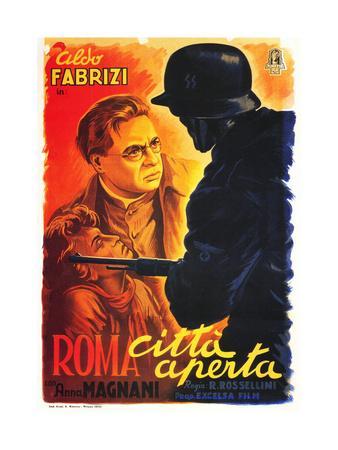 Ah, post war Italian cinema in its infancy. Filmed immediately after the end of the war and using German POWs as extras, the movie shows the scars Italy bore at the time. Filmed on the streets around Rome and with a partially amateur cast, the movie has a strong sense of reality that defined Italian movies for several years. It’s so easy to see the poverty that was present in Italy before the rise of fascism, the broken promises of fascism’s rise, and the destruction of the war that fascism wrought.

The movie has a reputation that its more of a document of life in Italy in the later years of the war than a story, so I was surprised at how strong the story actually is. In fact, the original distributor refused to release the movie because it was more document than fiction. At least two characters were based on real people, and the ending, which is filled with torture and executions, is far from a fun time at the movies, but damn is the movie great.

The story itself revolves around three people, Pina, a pregnant widow ready to marry an underground printer, Giorgio, an underground engineer on the run from the Gestapo, and Don Pietro, a local priest who is using his status as a shield from the Nazis and fascists to aid the local underground.

As a portrait of life in the underground, the movie is utterly convincing. It’s not just the production design (which really does feel like they filmed around Rome and nothing more), but the performances from the actors and non-actors alike. There’s a despair that’s evident in every Italian on screen for everyone, even the children, had just lived through several years of privation and war. The story reinforces all of that.

Pina is a woman trying to make a normal life in the face of all of this awfulness. She found love again after the death of her husband. She’s pregnant with her new man’s baby, and the new man has also taken a shine to her first child, but it cannot be and tragedy strikes. Giorgio tries to distance himself from emotional connection, wanting to focus on the work of insurrection, and his young lover, who has used her beauty as a way to gain rich lovers over the war and create a comfortable life, turns on him. Don Pietro hates the oppression of the fascists and will help anyone. He delivers counterfeit lira to the underground from the printer, protects underground men and boys from capture, and tries to organize escapes.

Pina gets shot down in the streets. Giorgio and Don Pietro are captured, and Don Pietro must watch the SS torture Giorgio as the German in charge begs him to convince Giorgio to cooperate. When Giorgio dies, Don Pietro has a moment of rage as he calls for God to smite the Germans, which he instantly begs forgiveness for. He’s then taken out and shot in the back of the head in front of a group of children.

The movie’s a downer, for sure, but with an implicit ray of hope. The movie was made by Italians after the fall of Nazism and fascism, so the deaths of those on screen aren’t felt as hopeless tragedies, but necessary steps towards Italy’s freedom from oppression. It’s a marvelous mix of sad and hope.