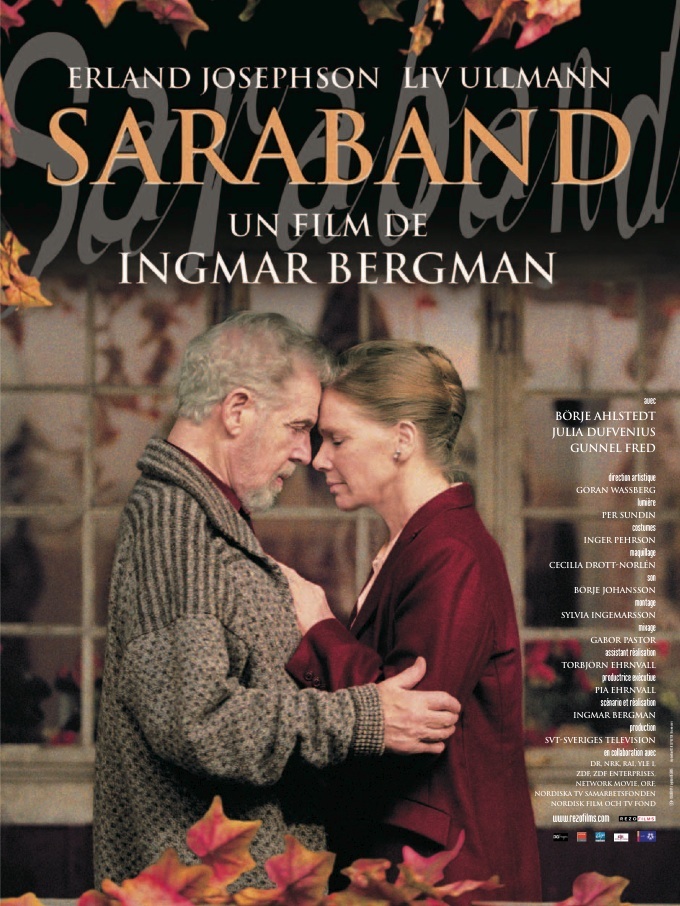 #16 in my Ranking of Bergman’s Best Films.

It’s more of a delayed tangent than a direct sequel to Scenes from a Marriage, but Saraband feels very much like a direct thematic follow through on the then 30 year old film.

Marianne and Johan have fallen out of touch, while Johan has come into a fortune after the death of an aunt. We discover that he has a son (Henrik) from a marriage predating his with Marianne (retconning!) who is living in a small cottage nearby Johan’s forest retreat with Karin, Henrik’s daughter. With seemingly no conceivable purpose, even to Marianne, Marianne shows up to Johan’s house, nearly uninvited. What then happens is a series of ten individual scenes, all involving only two people each. We go from the familiar (Johan and Marianne) to a bridge to the unfamiliar (Marianne and Karin) to the wholly unfamiliar (Karin and Henrik) before dancing around with different combinations through the rest of the film.

There’s a gentle sadness that permeates the movie in a few different ways. The sadness about the lost “touch” between Johan and Marianne is apparent and obvious from the start, but there’s another sadness that’s actually more immediate. The movie isn’t concerned with rehashing the ups and downs of the old couple’s relationships, but in exploring the effects of the death of a fifth character from two years earlier, Henrik’s wife and Karin’s mother, Anna.

There are immense subtleties at play throughout the film. For instance, the first thing I noticed about Karin was the fact that she wore a silver cross around her neck. To see religious iconography in a Bergman film is to see something intentionally placed there, and I believe that the cross (which is, of course, never actually talked about) has two meanings. The first is that two generations removed from the godless universe of Scenes from a Marriage, we have characters who haven’t completely abandoned the presence of God in the world. The second is that the cross actually belonged to Anna, which we see in a picture of the deceased woman. This attachment to Anna for Karin also has a double meaning for not only does Karin miss her mother (which is both implicit and explicit in dialogue), but there’s an increasingly obvious effort on Henrik’s part to make Karin a replacement for Anna.

That wealth of interpretation is there just from a single cross, and there’s more.

Henrik begins the movie in pitiful notes. He physically attacked Karin (which we see very briefly in a two second flashback) after Karin refused to play his games over her cello lessons anymore, which he is guiding her through in the hopes of getting her into a prestigious conservatory. His first full scene is with Karin as she comes home afterwards, and she dominates him at first. “You will not do that again,” she says firmly, and he, slouched over, agrees. The scene continues as the two lay in bed next to each other, and he talks about a time when Anna unmanned him quietly after a similar outburst before Karin’s birth. Henrik descends further into the pathetic when he begs Johan for money, but it’s the scene that Henrik shares with Marianne that shifts the audience’s perspective of him.

Henrik is an awful person. So awful, that after Marianne declines an invitation to dinner after a pleasant conversation, Henrik immediately begins to spew venom at his former step-mother (who’s only 2 years older than him). He insults her personally, attacks Johan, and comes out as a demonic creature completely. The irony is that the scene takes place in a small church where Henrik had been practicing on the organ.

There’s so much to unpack in this story of two people who must grow apart in order to move beyond the death of Anna, and the two witnesses to the destruction of a relationship. It’s sad and gentle and angry and vicious all at once. It’s also engrossing and a marvelous sendoff from a master of the form.