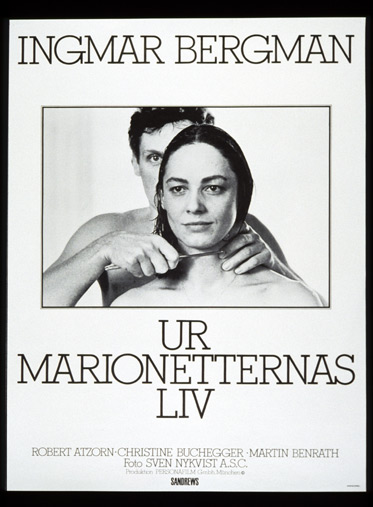 I bet you thought I was gonna gush over every Bergman movie, huh?

Made during Bergman’s self-imposed exile to Germany due to tax issues in his native Sweden, From the Life of the Marionettes is a jumble of a movie that keeps swirling around a point without ever quite getting to one. I think the central problem is that the human impulse, that of a need to commit violence, doesn’t seem to be something that Bergman has any real experience with. Maybe I’m wrong, and he was a violent bastard to one (or several) of his wives, but based purely on this, I’d say no.

The story begins with the murder of a prostitute by a man. What follows is a series of chapters (like how Bergman assembled Scenes from a Marriage and Saraband) but in non-linear order, which, I don’t think, ends up working particularly well. We find out about the man, a placid middle-aged and middle-class man with a wife and no children who harbors fantasies of murdering his spouse. His reasons seem to have something to do with sex with references to unexplainable urges of murder and a description of a dream where his wife humiliates him for lack of sexual ability. Maybe this could provide his motivation, but it’s a surprisingly small part of the movie. There’s a middle section where the wife’s partner, a gay man, talks about his own troubles with attraction and aging.

The movie is an odd combination of smart and bad at the same time. Just summarizing what happens in the film papers over my resistance to the film, because it “reads” better than it actually plays. There’s intelligence to how different elements come into the film, fall out, and then return, but the overall package is shockingly unwieldy and opaque. At the same time, there are wonderfully striking images throughout, in particular around the dream sequence (Bergman lost none of his ability with lensing and his long time collaborator, DP Sven Nykvist came with him to Germany to continue working with the director).

I guess the problem is that I just found the order of information reveal to be frustrating at best and the actual penetration into the murderer’s actions and mindset to be unconvincing.

1 thought on “From the Life of the Marionettes”