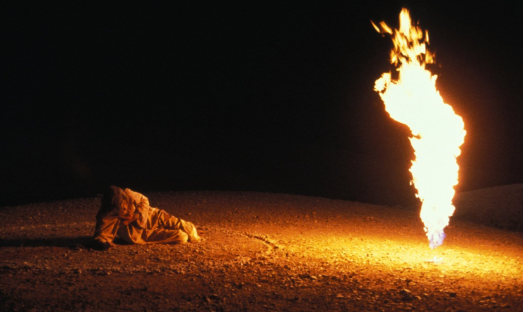 #1 in my ranking of Martin Scorsese’s films.

When I originally made my Top Ten more than a decade ago, I slowly filled it a couple of different ways. One of them was to ask myself, “X director should be on the list. Which of X’s movies should appear?”

I’ve always loved Scorsese. He’s been a titan of cinema since the 70s and, unlike many of his brethren, has lost none of his skill. He’s as talented and exciting today as he was when he brought Mean Streets and Taxi Driver to the screen. He’s still so talented that, in much the same way I would be open to the idea of replacing Kubrick’s 2001 with Kubrick’s Barry Lyndon, I would also be open to the idea of replacing Scorsese’s The Last Temptation of Christ with Scorsese’s Silence.

Still, I’ve revisited Scorsese’s entry and I have to say that I’m as happy to have it on the list as ever.

The dual substance of Christ-the yearning, so human, so superhuman, of man to attain God… has always been a deep inscrutable mystery to me. My principle anguish and source of all my joys and sorrows from my youth onward has been the incessant, merciless battle between the spirit and the flesh…and my soul is the arena where these two armies have clashed and met.”
NIKOS KAZANTZAKIS
This film is not based upon the Gospels but upon this fictional exploration of the eternal spiritual conflict.

That is the first thing that the audience sees when The Last Temptation of Christ begins, and it tells you exactly how to interpret the movie.
This is a movie where the main character is Jesus, but it’s not actually about Jesus. The movie is about the internal battle within every man’s heart to be holy while living in a real and physical world.

I was alive when the movie was in its original release, but I was a grand 2 years old. I wasn’t exactly plugged into the cultural consciousness at the time, so all I have seen about the controversy of its original release comes from small news clips of angry protestors outside of theaters screaming about how the Jesus in the movie is not actually Jesus.

The movie begins with a declaration that it’s not based on the Gospels. Its first dramatic moments are of Jesus building crucifixes on which to hang Jewish zealots who were fighting the Roman Empire. It’s not a challenge to the religion, but a challenge directed at the viewer, trying to separate the audience from its previous knowledge of Jesus and to take the story as it is on its own.

That story follows the character of Jesus from a man tormented by the voice of God who then tries to discover how he should interpret that very same voice.
In the beginning he tries to block it out, but he can’t do it. The attempt nearly drives him mad.

He then embraces it as Love, to love everyone unconditionally (which manifests first at his defense of Mary Magdalene).

He then embraces the axe, to bring about the Kingdom of God on Earth. This path comes to a head after the cleansing of the Temple when Jesus brings his disciples back to the Temple in order to tear it apart and bring about a very real revolution against Rome. Standing there, with the crowd at his back, and desperate for direction from God, he begins to bleed from his hands. God tells him there that he must suffer. 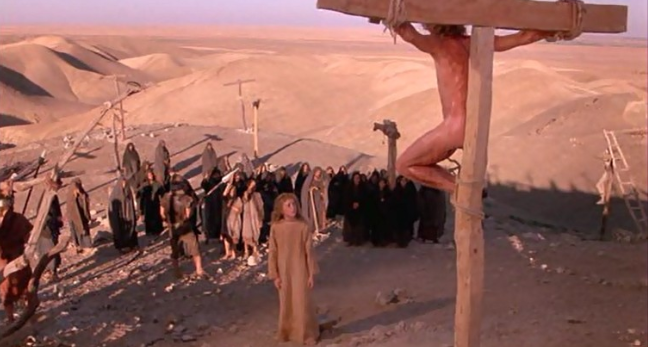 Suffer he does. He insists to Judas that Judas must betray him, which he of course does. He is captured, tried, scourged, marched and ultimately crucified on the cross. In his final moments, an angel appears to Jesus and offers him respite. If God saved Isaac from Abraham’s sacrifice, surely He would save His own, the angel explains. She removes him from the cross and leads him to marry Mary Magdalene. She passes and Jesus then begins a household with both Martha and Mary of Bethany where they start a family. Here, many years after the crucifixion, Jesus sees Paul in the town who talks of the crucifixion, death, and resurrection of Jesus. Jesus condemns him and calls him a liar. Paul scoffs saying that the story of Jesus was more important than the man he spoke to.
Finally, the movie comes to Jesus on his deathbed. His disciples including Peter and Judas visit him for the first time in years. It is here that Judas condemns Jesus. The Son of Man was meant for more than this. “What’s good for man isn’t good for God.” Judas then identifies the angel, who has been present in Jesus’ life since the crucifixion, as Satan.

Upon this revelation, Jesus struggles out of his house and shouts to God that he was too weak, but he’s learned his lesson and wants to be crucified. Upon this declaration, Jesus returns to the moment that the angel took him down from the cross where he calls out, “It is accomplished.”

Battle Between the Spirit and the Flesh

My appreciation of this movie tends to be personal rather than formal in nature, so I’m going to be using more personal pronouns than normal, but the question that comes to me when I finish the film is: How does this character of Jesus’ journey relate to my own search for holiness in a world of sin?

How many ways are there to interpret God’s word? There are many. Just think of the different faiths that all follow Jesus. But in terms of the personal journey we all share, do we love each other unconditionally? Do we take up an axe to fight for God on this earth?

I think that the movie comes to the conclusion that ultimately, no matter what path we chose, we must be willing to give it all away in the service of God up to and including our lives. It’s not an easy thing. In the movie, the character of Jesus was taken away from his final pain and offered temporal salvation from a terrible fate, but it wasn’t good enough. It provided him with temporal reprieve, but it left him unsatisfied and at a distance from God. Was that easy life favorable to the ultimate embrace with God in Heaven? The movie says no. It says that we must follow where God leads us, no matter what we have to give up in order to reach the destination.

It’s a hard message to take, and one that I understand Scorsese struggling with. The man once seriously considered pursuing a life in the priesthood, struggled with drugs, has been married five times, and lives a comfortable life detached from the kind of physical suffering common to humanity. He once told Roger Ebert that he thought that he knew he was going to go to Hell based on how he had lived his life. Scorsese seems like a man who struggles with the Catholic teachings of his youth, those that he has largely turned his back on, and how he lives his life everyday. The Last Temptation of Christ is that manifested in film.

Enough about the interpretation of the movie. How does it look?
I have to say, I think this film is one of Scorsese’s best looking films. Raging Bull‘s black and white photography is gorgeous. Silence‘s lush color palette is fantastic. However, The Last Temptation of Christ has a rugged and expansive look that Scorsese hadn’t even attempted up to that point in his career. The vast majority of his films at that time were set in New York City and centered on small rooms and back alleys. Here, filming in Morocco, Scorsese took great advantage of the country’s natural beauty and filmed so much of the film with mountains, lakes, and forests taking up space in the background of shots.

It’s really a testament to the simple step of taking a cheap production and going outside that can make a movie look far more expensive than it has any right to be. John Ford knew this when he kept going to Monument Valley. Terrence Malick shows this off in every movie. The French New Wave was essentially a bunch of kids wandering around Paris with a camera, and their movies looked like they were shot in one of the most expensive cities in the world (because they were).

Below are some screenshots to show what I mean. 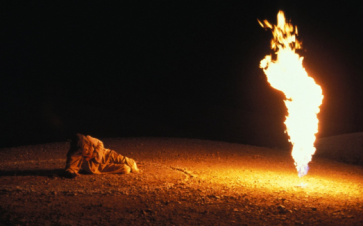 A Small Note on Music

I don’t know if you have ever heard Pete Gabriel’s score for the film, but do yourself a favor and check it out below. It’s hard to imagine a more off-beat but beautifully arranged score, especially one that tries to announce the arrival of a film that is both so traditional (the Biblical epic) and so different at the same time.

5 thoughts on “The Last Temptation of Christ”