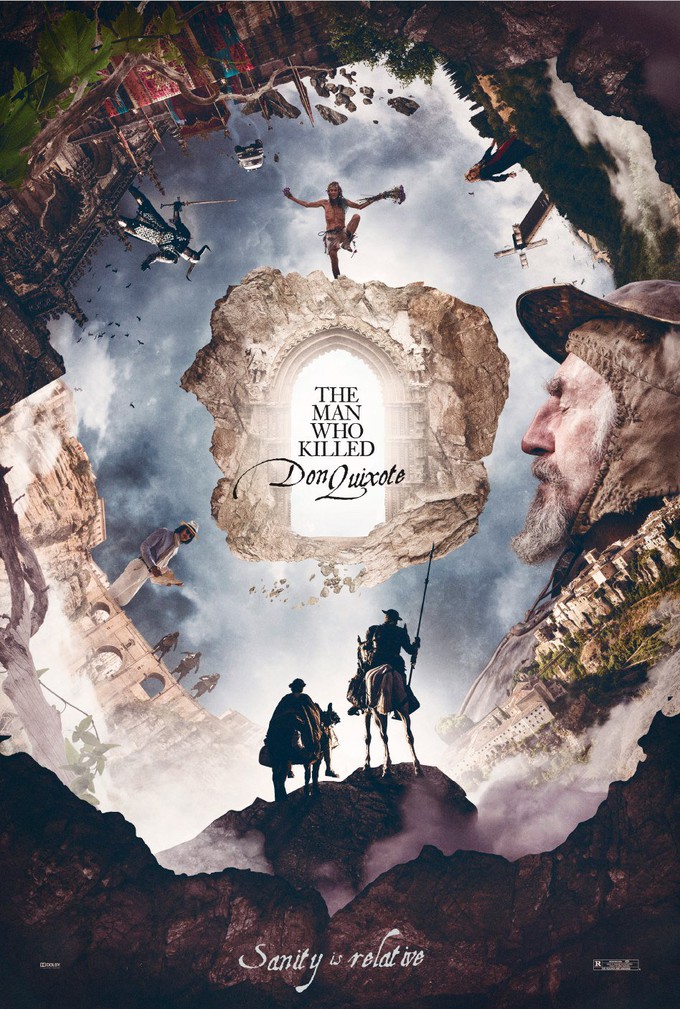 #3 in my Ranking of the Terry Gilliam films.

I’ve been tracking the interesting production history of this movie since I saw Lost in La Mancha, the intended behind the scenes documentary for the inevitable DVD release of Gilliam’s first concentrated effort at bringing his version of Don Quixote to the screen. After the disastrous first week of filming led to Gilliam and his producers agreeing to shut down production, the insurance company ended up with the rights to the script, and Gilliam spent the next 15 years or so trying to get them back.

Once he finally did, he rewrote the script, and, from what I can tell, it was a drastic rewrite. Our purported Sancho Panza no longer falls through time, and it looks like the fantastic elements ended up getting reduced significantly. In the documentary, there’s view of some suits of armor walking on their own that I was really hoping to see Gilliam work into the film, but alas, they did not make it.

Reviews began to come out, and they were largely what I would have expected. Gilliam’s best days are behind him, especially in terms of critical opinion. It’s largely self-inflicted after disasters like Tideland and The Zero Theorem, but critics aren’t as enthralled with Gilliam as they used to be when he was putting out Brazil and Twelve Monkeys. Reaction to Don Quixote was largely mixed, but I ended up seeing Kyle Smith’s review at National Review where he completely trashes the film (determining that Gilliam needs a studio to keep him focused, seemingly forgetting about the existence of The Brothers Grimm) and felt a bit dispirited. I’d been looking forward to this film for years, and I didn’t want it to be bad.

Well, I think a lot of people are missing something with the film, because I kind of loved The Man Who Killed Don Quixote. Gilliam probably would be helped by hiring writers with stronger senses of narrative structure and focus, but then something would get lost. Part of Gilliam’s appeal, to me at least, is how he is willing to follow any random thought. Sometimes that fails, but often enough it succeeds, and I think it succeeds here largely because it’s obvious that he both knows the original text by Cervantes, but he also understands it.

Don Quixote is actually two books written ten years apart, and I’ve always preferred the second. The first is the famous one that includes the fight against the windmill and the slaughter of the army of sheep, but it’s the second one where the real heart of the book comes through. To be honest, as I prepared to see the movie in the months up to its release, I never even considered the idea that Gilliam would approach that second half, but one of the trailers included a shot of a woman, dressed in medieval finery, saying, “This is going to be fun.” I saw that and knew that Gilliam wasn’t going to ignore the actual heart of the book.

Toby, a commercial director who’s cynicism has overtaken him completely, is in Spain shooting an insurance commercial that has a take on Don Quixote. At dinner, a peddler has a copy of his student film for sale, a black and white adaptation of Don Quixote. He’s fascinated by the journey back in time and decides that, since where he’s staying is so close to where he had filmed that student project, he’s going to take some time in the middle of the day to visit. He finds the place changed. The town feels less lively. The girl who played Dulcinea has vanished and her father is angry at Toby for it. And, most importantly, the old cobbler he had hired to play the titular role has gone mad and thinks himself to be the knight errant. Through a series of accidents and bits of craziness, Toby finds himself as Quixote’s Sancho Panza, a role which Toby takes up reluctantly.

Fantasy and reality begin to mix (a common theme in Gilliam’s work). First there are dreams that we and the character think are real for a time. Then come waking moments when reality bends (especially around a saddlebag of gold Toby finds on the side of the road). There are scenes that call back to moments in the book like when the citizens of the town find Toby and Quixote and challenge him to a joust as a knight in shining armor made of cut up DVDs reflecting the sun (which mirrors a similar scene in the book). They eventually come across a parade of medieval dressed people, and Toby doesn’t know if it’s real or not. Awkwardly, he acts as though it is, but the reality is somewhere in between. It’s not that he’s traveled back in time, but that these are modern people playing dressup. They’re people Toby knows, including his boss’s wife who are playacting at the behest of a Russian financier and vodka tycoon that Toby’s boss is trying to win an advertising contract from.

And this is where the meat of the original book’s second half comes in. In the book, Quixote and Panza are invited in by some rich people who have read the first half of the story (in universe, as they say, everyone’s read the first half of the real world book) and decide to have some fun with the errant knight. Panza sees through it all, but Quixote gladly becomes the butt of every joke. Pretty much the same thing happens in the movie, and it works really really well. It culminates in Quixote mounting a mechanical horse with a blindfold on as he travels to the moon to fight the enchanter and then continues on to the sun. He’s convinced it’s all real, but everyone around him is merrily laughing at him, all except Toby.

And that’s where the real heart of the movie is, because the movie’s central theme is the role of wide-eyed optimism and the place of chivalry in the modern world. Yes, it may be out of place. Yes, the world we’ve created may naturally push it away, but there’s still place for it. Quixote’s place was to try to right the wrongs of the modern world, and when he dies a bit later, Toby can’t seem to imagine a world without the old man, and the process of blending reality and fantasy continues until we end the movie with the most famous episode from the original book, the attack on the giants, led by Toby who has become Don Quixote himself.

Seriously, the movie is wonderful, I thought, but wonderful in a way that Gilliam is known for, which is unfocused storytelling with visual tangents that don’t always go anywhere. However, the central two characters, Toby and Quixote, are wonderful, and the journey shockingly well realized within the messy box that Gilliam works.

I don’t understand some of the hate the movie has gotten. I thought it was his best movie since Twelve Monkeys.

2 thoughts on “The Man Who Killed Don Quixote”