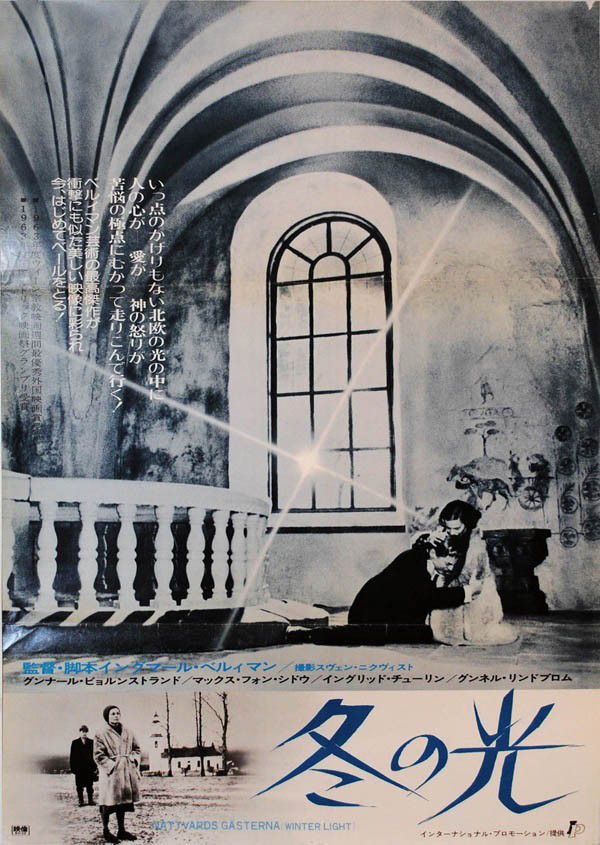 #9 in my Ranking of Bergman’s Best Films.

Tomas, a minister in the Church of Sweden, is finishing a service at a small country church with only a handful of congregants. He speaks the words of the communion rite seriously, but dryly. We can tell by the solemn by detached manner in which he speaks that Tomas is somewhat removed from this thing that takes up his life.

With the service ended, we begin to see Tomas’s relationships with some of his congregants. There is the school teacher, his lover, who’s an atheist and took communion as a challenge to him. There’s the married couple with the husband who’s consumed by apocalyptic visions stemming from the idea of China’s combination of saber rattling and nuclear ambitions (what he would do with Kum Jong Un fires the imagination a bit). We also see the hunchback who prepares each little isolated church for service and the bored organist who’s leaving before he’s finished playing the final song.

Tomas’s doubt about God’s existence, his consumption with the idea of God’s silence, is overtaking his faith. He can’t say anything to comfort Jonah’s visions, offering nothing but pablum. He can’t counter the school teachers barbs. He’s lost, begging for guidance from God, but God says nothing to him. There are subtle implications that God may be trying to  speak to him through other ways (a window brightening with light as Tomas takes his first large step to rejecting his own faith, for instance).

The key to understanding the film, though, really is Through a Glass Darkly. According to the essay in the Criterion book, Bergman wrote this movie as a direct response to his own previous film. Even without the essay, the connections are stark. There are no shared characters, but we hear the same repeated image of a Spider God, which should send up flags from every audience member. There’s also the continued references to the idea that God is love. The two different manifestations of God are now at war with the idea that there simply isn’t a God. A two front war has become three.

Which vision of God wins is actually a bit unclear, and I lean towards Bergman saying that the God is Love manifestation is the dominant one, an interesting counter to Through a Glass Darkly where the Spider God obviously won. There are key moments in the final minutes of the film that point to it. Tomas has traveled to a second church to say the service, but no one else but the hunchback, the school teacher, and the organist have shown. Will they even do it without a congregation? Tomas ultimately decides yes. Tomas has broken things off with the school teacher minutes before as Tomas has rejected both the Spider God and the God is Love visions, rejecting love itself. Just before Tomas begins the service, Marta, the atheistic school teacher, falls to her knees to pray, presumably to the God of Love.

And yet, there is still a literal silence, much like the hunchback describes must have been Jesus’ experience in his final moments. His apostles had abandoned or betrayed Him, and Jesus calls out to God asking why He had been forsaken. It wasn’t the physical suffering, the hunchback concludes, that took the greatest toll on Jesus, for it lasted no more than four hours and he’d survived years in different states of agony because of his condition. No, it was the silence that Jesus seems to have faced that must have been the worst.

Is God working through these people, or is there no God at all? Is God merely silent, or does he not exist? The ending suggests no solid answer, but a desire for the God of Love to be real.

These movies are intelligent, touching, and difficult, but they are also extremely rewarding to the patient viewer willing to give the films a chance.