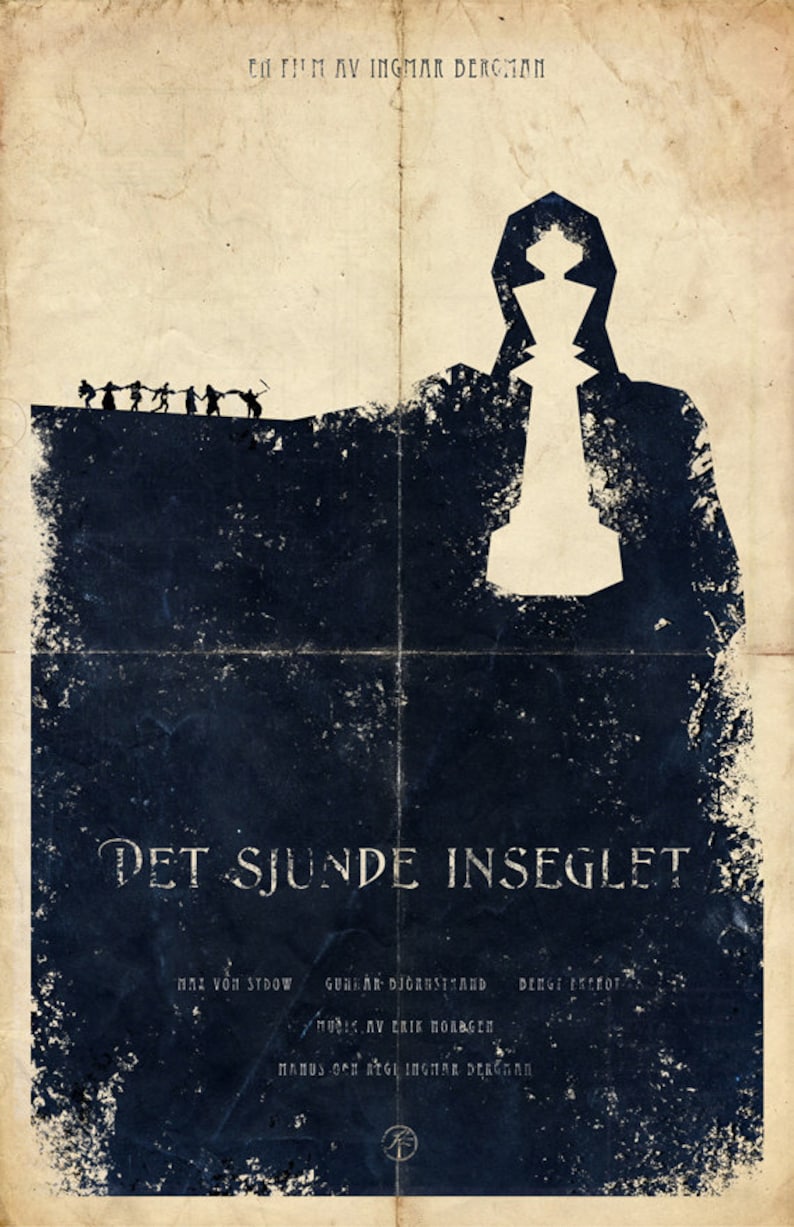 #4 in my Ranking of Bergman’s Best Films.

Here we have Bergman’s best known movie. The one movie that broke through the cultural consciousness to leave an imprint most people take for granted. The vision of death playing chess, as said in the movie itself, was a common enough medieval subject for paintings, but our modern culture’s image and the source comes straight from Antonious Block challenging Death to a game to extend his life.

Another thing about the movie that has suffused the culture is the idea that the movie is dour. It has dour elements, but it’s also surprisingly light and funny at times. Well, surprising if you’re coming at the movie blind, but if you’re knee deep in Bergman movies like I am right now, the light elements fit perfectly. Bergman was serious, but he wanted to entertain. I’m not just pulling that out of my ass. He said that his first aim was to entertain.

Block, a knight just returned to Sweden from the crusades, and his squire Jons have just washed up on shore. The way they are laying there implies the remnants of a shipwreck, where Death arrives. Block makes his challenge in an effort to win his life, or, perhaps merely just extend it long enough to get back home. Along they way, they band together with several people. There’s a small troupe of actors, a smith and his loose wife, and a young mute woman Jons takes on as his handmaiden. Along the way, as Block continues his game with Death, tricking and being tricked himself on the board, we see the little lives of these people. Jons is the most entertaining character because his nihilism is delivered so drily and with such wit that he’s a joy just to watch. The comedy between the smith, his wife, and another actor (that Death ends up claiming) is a combination of physical comedy and witty repartee that provides some of the most concentrated elements of comedic relief in the film.

But there are darker elements along the way as well. The country is in the middle of a plague, and people don’t know who to blame or who to turn to for salvation. People scourge themselves in a procession where the leader chastises everyone else about the meaninglessness of their lives. There is a witch that the locals insist consorted with the devil and is the cause of the plague. Block’s deepest moment of despair comes when he speaks to the witch, begging her for proof of the devil, for if the devil exists, so must God. But she cannot provide anything beyond crazed visions.

Through it all, God is silent. It’s a common theme in this era of Bergman’s career. Every movie he made from about the mid-50s on touched on it, but The Seventh Seal is probably the most overt and vivid in its treatment of the idea. In the face of massive suffering, Block looks for any answer and sees nothing.

But, that’s not all. The troupe of actors becomes comprised of only three people, Jof, his wife Mia, and their son Mikael. Jof sees things. He has visions. When we first meet him, he has a vision of the Virgin teaching the Child how to walk as a toddler, but there’s doubt about the truth of his visions. He admits to having concocted one in the past, but he insists that he didn’t ask for these visions, someone gave them to him. Just before the whole party makes it to Block’s castle deep in the forest, Jof has another vision, he sees Block playing chess with Death, and he takes Mia and Mikael away. They flee and hide in terror at the storm passing overhead, which he calls the flight of Death.

At Block’s castle, the remnants of the party meet Block’s wife, and they begin a meal until Death arrives and claims them all. There are mixtures of emotions. Jons looks on firmly, ready to meet his end. The mute girl says her only line of dialogue in celebration of the end. Block cannot even look at Death and remains in profile in the background, his hands clasped together as he prays to God.

The movie ends with Jof waking up after the terrible night to find a beautiful day. He begins to pack up Mia and Mikael when he has another vision, the other famous image of the Dance of Death. Death leads the party over a hill, each hand in hand, and they dance behind Death who leads them on. Is Jof a crazy person who just sees things? Or was he divinely touched in a way that saved him and his family from the end the rest of the party shared?

Once again, it’s Bergman begging for signs from God he can interpret. It’s not a rejection of God, but a plea to hear something from the Supreme Being who treats him with nothing but silence.

3 thoughts on “The Seventh Seal”