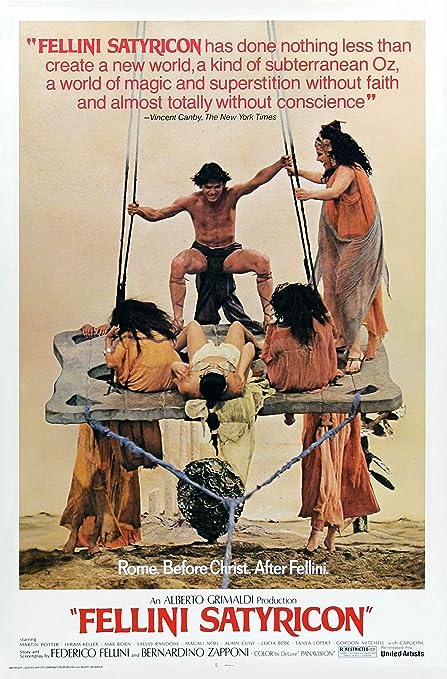 #20 in my ranking of Federico Fellini’s films.

I began thinking of this movie a different way about halfway through, and it made the experience a bit easier to digest, although I ended up actually enjoying it no more than I was. Instead of seeing it as Fellini’s view of Ancient Rome, I saw it as a post-apocalyptic vision. I don’t know why that made the experience easier, but it did.

I love Fellini. La Dolce Vita, I Vitelloni, Nights of Cabiria, La Strada, Juliet of the Spirits, and 8 1/2, they’re all great films with loose narratives and resemble a carnival parade. Satyricon also has a loose structure and resembles a carnival parade, but I think there are two major elements that keep me from jumping in as much as I do with the others. The narrative is far looser. In fact, I’d say that there’s almost no connective tissue, and the tissue that’s actually there (the characters that drift in and out) might not actually be the same characters from one piece to the next. Yes, they’re played by the same actors and called the same names, but their concerns in one segment end up completely forgotten in the next and never return.

Within each of the dozen or so segments are narratives within themselves (like the actor who bought the slave that the main character wants to claim back or the Labyrinth and the Minotaur that the main character must overcome), but the narrative even within them are secondary to the grotesqueries on display. From magnificent sets and costumes that evoke both Ancient Rome and Mad Max to actions such as decapitations and the removal of other body parts show a society in both complete decadence and complete savagery. The advertising around the film made it clear that the movie is set in pre-Christian Rome, so is this Fellini warning the world about what kind of morality will play without the Church?

Fellini was always one of those Italians who had a tumultuous relationship with the Church, never quite splitting with it but never really embracing it as an adult. He also lived in the world of Italian cinema with the implied sex and drug use. Satyricon feels like both a celebration and a warning of the kind of lifestyle that he had been living for a while, though I may be reading too much into it. However, it still rings true that Fellini saw in his vision of Ancient Rome both wondrous sights and incredible grotesqueries at the same time.

So, there’s a lot going on under the surface of the film, but I just can’t get into the experience itself. Roger Ebert reviewed the movie twice, once on its initial release in 1970 and the second time thirty years later in 2001. In the first review he called the film a masterpiece. In the second, he crawled that back a little bit, but not his 4-star rating. I think I see what he saw, but I just don’t appreciate it. The sights and sounds are truly great, but I saw it more like a long slideshow instead of a cohesive experience. It’s like La Dolce Vita but more insane and less comprehensible.