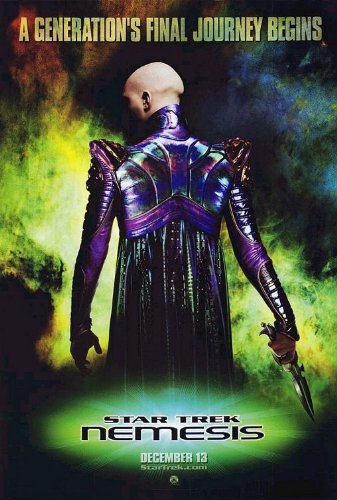 #7 in my Ranking of all Star Trek films.

The final even-numbered movie of the original ten films may not be as strong as the others, but it fits in, in terms of quality, with the best of the odds. It’s underrated and a bit underappreciated.

Nemesis doesn’t begin well, though. It’s first fifteen minutes or so are, to put it kindly, odd. We have a meeting of the Romulan Senate, a body set with ruling an empire spanning several star systems, and it look like the nice office of an administrator. It feels really small. There’s a lot of high emotion running around with people we don’t know (and will never get to know), and then a little device that kills everyone in a green glow, turning them to stone and dust. The scene serves a couple of narrative purposes (introducing the mass assassination which sets up the antagonist’s rise to power and the weapon/MacGuffin of the film), but it probably shouldn’t have been the first scene of the movie, if a scene at all.

We then transition directly to Riker and Troi’s wedding. There’s an effort to paper over the movement in tone as Picard starts the scene addressing the screen directly with thoughts on duty, but it’s still awkward in and of itself. We go from mass murder, a speech on duty, to a light-hearted wedding in about 2 minutes. It’s handled poorly. And this wedding gets really lighthearted, with Data making odd use of the word conjugation, Worf getting drunk off Romulan ale, and Data singing Irving Berlin.

Finally, we get aboard the Enterprise, but we still have one moment that simply doesn’t work to go. I’m a Star Trek fan, in case you may not have noticed. I’ve seen every hour (save some of Discovery), I know the characters’ histories well, and I understand enough of the technobabble to get me through. There’s a moment here where they detect a signal and decide to investigate. It’s positronic, you see, and there’s an ominous tone of music at the reveal. I remember my first viewing, and I was confused. Why was this so important? In order to realize how important it is, you have to remember a few things. The first is that Data’s brain is positronic (check, I recalled that easily). The second is that Data is the only functioning android left (I had to dig around a little bit, but okay). The third is that no one else has been able to replicate a positronic brain since Data’s creator, Dr. Soongh, died decades before (slipped my mind). If this movie is designed for Trekkies, it may be reasonable enough to assume they can recall all of this and feel the same sense of shock as the characters display. For general audiences? Nope, not even close.

Okay, I’ve complained enough. Those three meandering paragraphs are complaining about the first fifteen minutes, and we have about an hour and a half to go. What we get in that next hour and a half is actually quite interesting. We get two sets of doubles and questions about what makes us who we are, our genetic (or positronic) makeup, our experiences, or a combination thereof.

The Romulans cloned Picard years back in an abandoned plan to replace him with a double agent (I love the detail of the plan simply being abandoned because a new party came to power). This clone, Shinzon, grew up, after his exile, with the Remans, an underclass of Romulan society, where he became a tested battle commander in the Dominion Wars. He used that position to orchestrate the assassination that began the movie and build a massive attack craft called the Scimitar.

The other double is Data. Investigating the positronic signal (followed by the single most pointless action scene I think I’ve ever seen), they discover a since unspoken of early model of Data, named (small ugh) B4. B4 is a simpleton in comparison to Data. Having none of Data’s lived experiences he’s a blank slate. Perhaps he could reach Data’s potential, but it would take years.

The story has the two pairs move around each other, testing each other’s strengths and weaknesses against the backdrop of the Scimitar‘s imposing presence. There’s no denying that Shinzon can’t be just out for an olive branch for peace with the Federation, but Picard is fascinated by his clone and the questions that he raises. B4 had been found and reprogrammed a bit by the Remans as a lure to bring the Enterprise close to Romulan space, making it the closest to Romulus once the call comes out for talks. He was also built to try and hack the Enterprise‘s computer.

Eventually, everything dovetails after Sinzon kidnaps Picard for a transfusion meant to save Shinzon’s life. Data, disguised as B4, rescues Picard and the two ships end up in a chase for Federation space. The Enterprise is no match in any way against the Scimitar, and the eventual fight leaves the Enterprise crippled after a desperate ramming maneuver that only partially harms the larger Romulan ship. There are parts to this battle which people have problems with, and I don’t like the moments themselves, but they tend to be small moments. Troi uses her psychic ability at one point, and the filmmakers highlighted her eyes with light, but missed in one shot. Some Romulan warbirds show up at one point and help the Enterprise, but the conversations around it are odd. There’s also a hand to hand fight between Riker and the Reman viceroy that leads to a bottomless pit in the middle of the Enterprise (which is just weird). Still, the overall effect of the battle scene is actually quiet effective.

And then we get to the great part of Nemesis. Data is the single best part of the movie, much like in First Contact. Picard is on the Scimitar at the end of the battle, trying to destroy the weapon that is about to wipe out the Enterprise when Data floats over to the enemy ship. After the final confrontation between Picard and Shinzon that leaves the Reman dead, Data shows up and wordlessly uses a techno device to send Picard back to the Enterprise. It’s a one way, one use tool. Data flew over to the Scimitar to save Picard, says “Good-bye” to the empty space that Picard had just occupied, and then destroys the weapons and the ship, sacrificing himself.

Some critics of the film say that this actually means nothing because of B4. Earlier in the film, Data had downloaded all of his experiences to B4 in the hopes of helping him grow. From the meta side, this is an obvious attempt to ensure that Data comes back for the sequel. However, that reading can’t apply to Data’s thinking in his final moments. Whether B4 becomes Data or not is something that can’t occupy him in that moment. B4 is another android completely. Data’s consciousness is there in that physical body and cannot be transferred. His choice to send Picard back and destroy himself to save the rest is all about Data throwing himself on the proverbial grenade with the understanding that everything he is is about to be extinguished forever. His instance of consciousness has no hope of finding further life. His sacrifice in that moment is total.

I find Data’s death in Nemesis more affecting than Spock’s death in The Wrath of Khan.

Overall, the movie does have its problems, but I also find that its strengths are alternatively well handled and quite affecting. It’s the weakest of the five even-numbered films, but it’s definitely not bad.