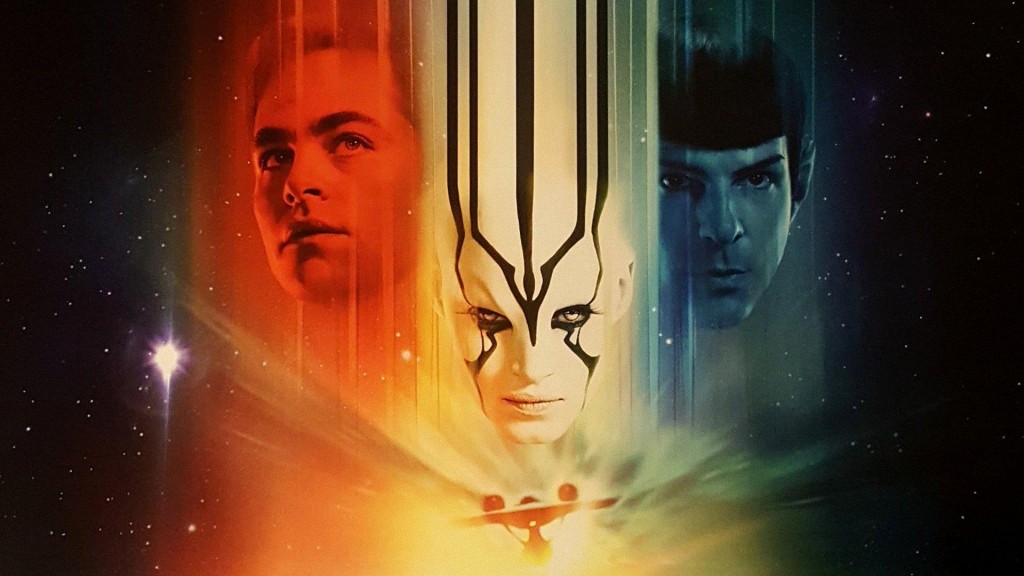 #5 in my Ranking of all Star Trek films.

With the world established, the characters set, and the awkward teenage years behind them, it was about time for the crew of the Enterprise to have a more interesting and cohesive adventure. I’m kind of happy that it didn’t grow up too much, though, because the action is fun.

Three years into his five years mission of deep space exploration Captain Kirk gets attacked by tiny monsters and then writes a log about how bored he is. Well, really, it’s about how life in deep space has become repetitive and seemingly pointless considering the vastness and infinity of the universe. It’s an interesting place to begin Kirk, essentially making him a new character after the brash youth of the first two rebooted films. He’s quieter, more isolated, and more tired. When the Enterprise docks at Yorktown, an expansive (and wonderfully designed) space station, Kirk talks to an admiral about a promotion that would remove him from the captain’s chair.

An escape pod floats towards Yorktown and the survivor begs Starfleet for help. Her ship is hidden on a planet in a nearby nebula. Kirk volunteers for the mission, and they’re off. The ship gets attacked by a swarm of small ships, cutting it to pieces. The destruction is rather surprising (although it misses the emotional impact of the Enterprise‘s destruction in The Search for Spock), and the survivors gets split up. Most get kidnapped by the bad guy, Krall, while most of the main characters escape to the surface to organize a rescue.

The antagonist, Krall, has the most potential of any Star Trek villain in all thirteen films, but he doesn’t reach it. For about four-fifths of the running time, he’s the bad guy in make up who hates the Federation and little else. However, we get a reveal late in the movie that he’s actually Balthazar Edison, the captain of the USS Franklin, a hundred year old ship. Krall has been kept alive by sciency mumbo jumbo that sucks life from other people, and he’s developed a hatred for everything the Federation stands for. He was born of a time before the Federation, never really found his footing in the new world of peace, and was lost in space. His extended time shipwrecked on this planet in deep space combined with his antipathy against the Federation and its ideals to create a monster. Unfortunately, we get all of this way too late in the film. I wish his backstory could have been revealed much earlier in the film to give time for more people to bounce ideas off of him instead of having their arguments be about “unity is our strength” generics.

There’s another new character in the mix: Jaylah. She’s a former victim of Krall who escaped and set up shop in the ruins of the Franklin, hidden on a cliff. She’s really good, though, again, her backstory comes in a quick burst late in the movie. I would have been happy without the backstory, though I suppose some explanation for her presence is necessary, because I think she’s a really good character without the backstory. She’s inventive, speaks in an entertainingly broken English, has an affinity for Public Enemy, and shows genuine fear at Krall. She uses the Enterprise crew (in particular Scotty) to get what she wants, and they use her to get what they want. It’s a really entertaining dynamic

Kirk’s journey through this adventure brings him back to the central mission of Starfleet. The search for the unknown, the danger of the cosmos, begin to appeal to him once again. The use of the Franklin was a great decision by the film. It’s old and rickety instead of sleek and safe like the Enterprise. Just getting it into the air is a thrill ride that nearly kills everyone. The ship itself is used as he reaffirms his joy in the ideals of exploration. By the end, he’s turning down the vice-admiral promotion and talking about the dangers of deep space in a way we haven’t seen since he first showed up at Starfleet Academy.

On top of it all, the action is really well done. It ends up balancing some silliness with a motorcycle better than expected. The destruction of the enterprise is methodical and really well rendered. The final battle with the swarm uses Beastie Boys music better than 2009’s Star Trek did. It’s a rocking, rolling, good time and it actually has good characters and a solid story behind it. It’s the best Star Trek movie since First Contact.

3 thoughts on “Star Trek Beyond”