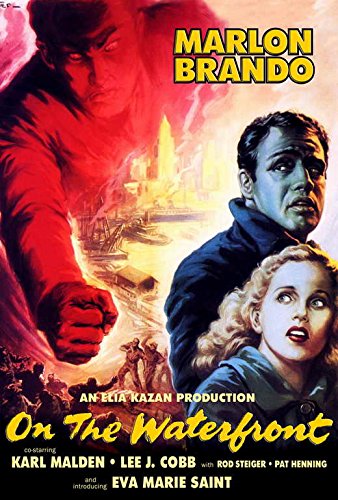 Occasionally I discover (or, in this case, rediscover) a movie that strikes me with its perfect shot compositions within its first few minutes. The Big Country was like this, but On the Waterfront struck me the same way. The scene in the back of the bar near the beginning of the film that introduces Johnny Friendly and Terry Malloy is so remarkably framed with Elia Kazan using extras to provide visual context around characters, implying power dynamics and relationships. I remembered little of this film from the last time I saw it as a teenager, but I certainly had no inkling of the effortlessly classical compositions awaiting for me.

When people talk about Kazan’s 1954 feature, they rarely start with its visual aspects. It’s either the connection to HUAC or Brando’s central performance that take first priority. Well, why be like everyone else? This movie looks amazing. Aside from its perfect shot composition, the film, shot on locations at and around a real pier, echoes the nascent Italian neo-realist movement while maintaining its own distinct, more classical style. Kazan said something along the lines of it should look like real life, but the creative team should never lose sight of the fact that they were making a movie. It provides the film with a grimy, lived-in feel while, at the same time, imprinting the film with an distinct artistic imprint that uses the reality of the world without being used by it.

The story, as we should get to, is about a young hood, Terry, who had an unsuspecting hand in the murder of a longshoreman who was ready to talk to the police about illegal activities of the union. Terry is automatically hit by guilt. He had liked the guy and had no idea that he was going to get pushed off the roof to his death. When he meets the man’s sister, Edie, his attraction to her mixes with his guilt and he reaches out in his own awkward way. Neither have any real experience in love, so their budding romance is halting, hitting snags and twists and turns along the way. Eventually, Terry has to reveal his complicit role in the brother’s death in a scene that is striking for the way it delivers the information. We already know the details of Terry’s involvement, so hearing the confession itself isn’t really necessary for the audience. So, as we watch Terry plead with Edie for forgiveness, a nearby boat blows its whistle, drowning out all other sound and we only watch the two faces. It’s such a great way to cut through unnecessary detail and attack the emotion of the scene head on.

Terry’s guilt isn’t limited to his budding romance with the good-looking blonde. He’s been groomed by the union because of his relationship to the boss’s number two, Terry’s brother, but he cannot let go of the idea that the actions of the union don’t trump his own feelings of right and wrong. So, he fights with himself about what to do. The union sees this as a sign that he will turn on them and they grow wary, and they end up being right. Terry turn’s state witness and tells everything he knows. Johnny Friendly is, of course, pissed and takes out his rage on Terry, sending Terry’s brother Charlie to bring Terry in for a hit. But Charlie can’t turn in his own brother and lets him go, leading to Charlie’s murder.

In the face of all this, Terry still heads down to the docks, ready to face Johnny Friendly directly. He’s angry and he’s going to give Friendly what he deserves. In the famous scene in the cab, Terry talks about how he threw the fight that could have led to him getting a title bout. With that in the back of the audience’s mind, Terry gets into a fistfight with Johnny, and Johnny wins. It’s never said, but I believe Terry was smart enough to know that if he were to beat Johnny in a physical fight, he was going to lose the overall fight about Johnny Friendly’s power, so he threw the second match of his life. He’s beaten bloody, but Johnny Friendly loses the little authority he had left over the union.

It’s a triumphant story of one man facing a system and winning. Filled with great performances, a rousing score from Leonard Bernstein, and dripping with visual beauty from beginning to end, On the Waterfront is a fantastic picture.

3 thoughts on “On the Waterfront”