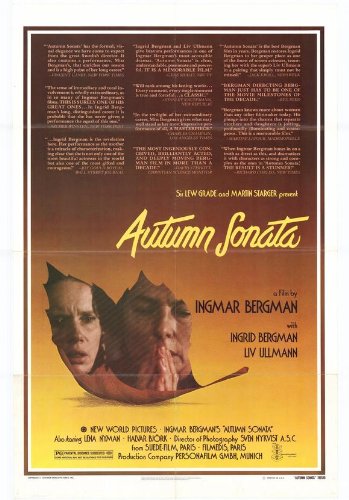 #13 in my Ranking of Bergman’s Best Films.

Autumn Sonata fits so well into Bergman’s filmography in a couple of different ways, and it’s amazing in the way that much of Bergman’s late career was amazing. There’s nothing showy about the film (though it is certainly visually sophisticated and adept). There’s nothing grand about it (the film’s scope is focused almost solely on the face of two women). And yet, through the power of Bergman’s pen, his two actresses, and his cinematographer Sven Nyqisk, Bergman creates an intimate and expansive view of humanity. It’s almost old hat for him.

Liv Ullmann plays Eva, daughter to Charlotte, played by Ingrid Bergman. Eva is a bookish woman married to a nice man, Viktor, who begins the movie writing to her mother after she hears of Charlotte’s lover’s death. She earnestly wishes for Charlotte to come and visit. When the mother arrives, Eva lets it known that Helena, Eva’s sister who is suffering from an unnamed degenerative disease, has been staying with her for two years. Charlotte is obviously disturbed by the fact, but she puts on the mask of a well-practiced performer and cheerfully greets her invalid daughter. Later that night, mother and (able) daughter confront each other in the dead of night. They both realize that the visit was a mistake as they let their decades of hurt loose upon each other until Charlotte leaves the next day.

Like all of Bergman’s best movies, this works wonderfully well on two layers. The top is the basic emotional fight between Eva and Charlotte. Charlotte was an absent mother who took up a lover while Eva’s father was still alive. Eva felt completely abandoned, and it’s made worse with Helena. In fact, when we first see Helena, the relationships haven’t been that explicitly defined and the audience could be forgiven for thinking that Helena is Eva’s child not Charlotte’s. The fact that Charlotte placed Helena in a care home several years earlier, and, in fact, hadn’t seen anyone in the family for a full seven years gets meted out slowly. Eva becomes vicious towards her mother as the night goes on, going so far as to blame Charlotte for Helena’s illness (an unfair charge, but one more in a long line that leaves Charlotte unable to respond).

The second layer is even more fascinating. From the beginning, I imagined Charlotte as a stand in for Bergman himself. By his own admission, Bergman was, at best, an absent father to his nine children (eight across five marriages and one with Liv Ullmann). He was the celebrated filmmaker while Charlotte is the celebrated concert pianist. Charlotte insists that her art is the only emotional outlet she needs to explore since it touches so many people and says so much, but that is of little consequence to Eva, the abandoned daughter. At the heart of the movie’s subtext is the question: Where is the line between public love and private love? Can there be crossover between the two?

The film is populated with several marvelous scenes that attack both text and subtext at the same time. The most central is probably the one where Eva plays a Chopin Sonata for Charlotte. Eva has never had Charlotte’s talent, it’s obvious, but she is Charlotte’s daughter. So, when Eva finishes her rendition of the piece, Charlotte should speak with warmth and affection towards her daughter’s efforts, shouldn’t she? She can’t, though. Instead of, perhaps, insincere appreciation, Charlotte offers a textbook critique of form and intent, breaking down Eva’s failures as though she were just a student. Maybe Eva could use this critique in the event she were training for performance, but she wasn’t. She was only trying to share in her mother’s art, but her mother couldn’t have it.

A special note about Ingrid Bergman. Despite the shared last name, Ingmar and Ingrid were not related (ironically, Bergman’s longest marriage was with another Ingrid). In fact, despite both being Swedish and having worked in movies for decades, they had never worked together before. And yet, Ingrid’s performance in Autumn Sonata is, in my opinion, one of the great performances in a Bergman film. She feels like she’s been in his troupe for decades. Instead, they had rehearsed (apparently acrimoniously) for a few weeks before filming, and that was it. Her Charlotte is angry, self-righteous, pained, and lost all at once in a way that shows that she had learned very much in her decades acting.