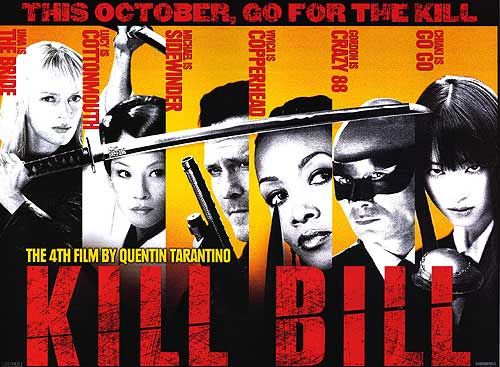 #2 in my Ranking of Quentin Tarantino movies.

Much like The Lord of the Rings and Manon des Sources, Kill Bill was a large movie shot at one time and released in separate parts.

It is amazing that over the course of a single movie, Tarantino turned himself into one of the premier action directors of his generation. The most action-oriented scene he had ever shot before this was probably Mr. White hitting Mr. Pink to the floor in Reservoir Dogs. Then, he brings us Showdown at House of Blue Leaves which is one of the most inventive action tour de forces in modern movie making. One thing Tarantino is, certainly, is a student of film, and it is obvious that he did his homework before he conceived of, planned, executed, and edited together that masterpiece of action cinema.

The movie around it is great too.

This is Tarantino’s epic. This is his most sprawling film with a depth of emotion he rarely ever reaches for. The core of the film is The Bride, Uma Thurman’s ex-assassin left for dead by her former boss and lover out for bloody vengeance. She’s believably tough, angry, scared, and vulnerable at different times. When she cuts through the Crazy 88 at the House of Blue Leaves, we’re not only willing to believe that she can do it (complete with stylistic flourishes like wire-fu that enhances the action into some kind of super-reality), but we’re also invested in her journey. The key to that investment is, like with most Tarantino films, the film’s structure.

The first half of the film is frontloaded with the outer veneer of the conflict that really touches on the most basic of emotions driving The Bride. She was a member of the Deadly Viper Assassination Squad, and when she decided to leave, their leader (and her lover), Bill, took it badly and had her killed. She doesn’t quite die, wakes up four years later from a coma to find the baby she had yet to deliver gone, and her legs atrophied to nothing. She wills herself back to functional and begins her quest for revenge. We see her second target to start the film, Vernita Green, who functions as a small and darkly comic introduction to the nature of the conflict. The biggest first fight is the first chronologically, O-ren Ishii.

We get O-ren’s backstory, which functions not only to tell us the particulars of the young woman’s meteoric rise to power within the Japanese underworld, but also as a proxy for the other members of the Squad. We hear very little backstory of the rest of the gang, but we hear O-ren’s background in great detail (complete with a full animated sequence). I think that’s to give us enough detail to understand O-ren and to also understand that the other members of the squad have similar backgrounds and are similarly deadly, by implication.

We then get that fantastic action sequence. One of the few things I understand about building an extended action sequence is that you can’t get boring by doing the same thing repeatedly. You have to have variations, complications, and a story within it. That’s exactly what the Showdown delivers. We have different characters that feel distinct (especially the young madwoman, Gogo). We have a progression and escalation of the conflict, and we finally get to a full resolution as The Bride lords over her victims, demanding their lost body parts as her property. It’s such a virtuoso demonstration of ability at the service of story. I even love the turn to black and white (which was done for the American version to receive an R-rating, it was released in color around the rest of the world). It gains a certain old-school feel that meshes well with the music choices over the visuals, though I imagine that if Tarantino had known he was going to have to release it like that, he might have made different film stock and lighting choices.

The second part begins in much the same way as the first, with a prologue that essentially tells the audience that The Bride is going to survive until late in the coming action. With Tarantino, it’s not about the destination, it’s about the journey, and he’s there to make the journey as entertaining as possible.

The Bride, fresh from taking out O-ren and Vernita, heads to the American southwest and Budd, Bill’s brother and number three on her list. The portrait of Budd that Tarantino draws is so wonderful. He was like the other members of the Deadly Viper Assassination Squad, but he’s fallen very far. He’s hawked a priceless sword and works as a bouncer in a far from busy strip club, receiving nothing but disdain from his boss and doing the dirtiest jobs in the place. But, he has lost none of his ruthlessness, as The Bride discovers when she shows up at his trailer and tries to take him by surprise.

I love the Showdown at House of Blue Leaves, but I think Budd burying The Bride alive might be the best sensationalistic scene of the film. It’s claustrophobic (enhanced by Tarantino beginning the sequence in 1.33:1 instead of the 2.35:1 aspect ratio he had used through the whole film), tense, and Budd demonstrates an easy willingness to cause severe pain on The Bride. Budd’s final words of the sequence (“This is for breaking my brother’s heart.”) is so pitch perfect, and then we have one long shot, mostly in complete darkness, as the heavy and jarring sound of dirt crashing against the wooden casket The Bride has been nailed into shoots through the soundtrack.

Tarantino then jumps backwards in time to one of the earliest events in the film’s chronology, The Bride’s training with Pai-Mei, the ancient Chinese kung fu master. It’s a highly entertaining sequence that shows The Bride’s transition from girlish waif to hardened killer, and it’s placed right here in order to provide the most emotionally satisfying conclusion to the burial. Watching The Bride get buried, we have no hope, but learning that part of her training could help (and obviously does help) her escape her prison is emotionally satisfying. Placing that training sequence far earlier would put it 3 hours before the burial, and I think it would have diminished the impact of the sequence’s emotional delivery.

Anyway, the fights of the film continue to get smaller. Budd gets killed by Elle, the final member of the squad and The Bride’s replacement (both Elle and The Bride are blonde with blue eyes, and Elle has obviously become Bill’s lover). The Bride, still covered in dirt from her escape, shows up at Budd’s trailer and the two have a fight in the dirty confines of Budd’s living space. Spittoons are thrown. TV antennae are used as makeshift swords. Walls are torn apart. An eye gets pulled from its socket and stepped on. The Bride makes off, ready to make her final confrontation with Bill.

When she does arrive, she finds that her daughter is still alive and the movie’s plot stops. The story doesn’t stop, it keeps on headfirst, but the plot of killing Bill comes to a complete halt for about half an hour, and it’s a great half an hour. Bill, obviously remorseful for what he had done to The Bride, has raised their daughter, B.B., as well as he could, and she’s a cute little four-year-old. The Bride gets to know her daughter and puts her to bed before Bill and The Bride have their first scene together since the wedding (rehearsal) massacre. It’s a raw scene of condemnation and hatred. It’s such a great scene that reveals the depths of the hatred and love the two shared for each other.

And once again, the fight gets smaller. I’ve read that the beach fight that Bill proposes was actually Tarantino’s plan, and if he had filmed it, I’m sure it would have looked fantastic. However, I find something really satisfying about the final fight lasting roughly five seconds and done entirely while sitting in chairs across a table. It’s intimate and about the characters, not the flashy choreography. Everything “fun” about the genre has been stripped away by the time The Bride gets to Bill’s hacienda. It probably shouldn’t come back at that point.

I love this film completely. It’s probably Tarantino’s most satisfying work emotionally. It has a breadth and depth that is kind of shocking. He became an excellent action director. His dialogue is as fun as ever. He pushed himself to become more, forcing himself to take on tasks that he had never done before, and he excelled at them. This is a triumph for Tarantino.