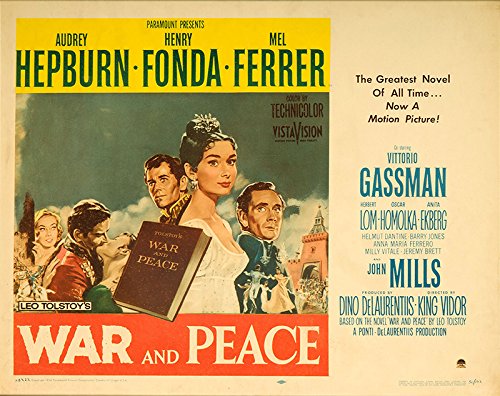 How do you adapt a 1200 page book into a 3.5-hour film? You cut a lot. And King Vidor cut a lot, but he didn’t cut well. Some of it makes sense. Nicholas Rostov is probably my favorite character in the book, but if you’re going to cut this story down so much, he’s one of the first targets. He appropriately has almost no screen time (though why they included his friend Denisov at all is a mystery to me).

The problem of the film can be demonstrated through an individual set of scenes about halfway through the film. As in the book, Natasha Rostova and Prince Andrei agree to marry, but Prince Andrei’s father demands that they delay the marriage for a year while Andrei goes abroad, hoping for the betrothal to simply fall apart in the ensuing 12 months. The scene that immediately follows Andrei and Natasha’s goodbye is the scene that introduces Natasha and Anatole. There’s a line of dialogue later about how 9 months have passed, but in the reality of the movie watching experience it has been mere seconds since Andrei said good-bye before Natasha is making googly eyes at Anatole. It feels like no time has passed at all in the film. In the book the weight of the months is described and obviously weighs heavily on Natasha. It’s clear that she is depressed and feels alone, providing the perfect ground for the lascivious and amoral Anatole to come in with promises of love and steal her away (unsuccessfully). In the movie, that time is never felt so Natasha ends up becoming a far less interesting character overall. She feels flighty instead of lonely. Silly instead of tragic.

And that exemplifies the problems with the movie’s presentation of the story. The individual scenes are there but they have no room to breathe, to create any depth within the characters who are making the actions. It feels like they are making decisions because a screenwriter has deemed it so rather than they are individuals who make choices based on a complex set of ideals and desires. The characters become shallow.

The one character that suffers the most from the adaptation is Pierre. Vidor excised his joining of the Freemasons and his aborted attempts to help his serfs through magnanimity. Pierre’s entire journey and search for meaning is gone. Instead Pierre walks around Moscow, occasionally talking to Natasha, making a terrible match with Helena because reasons, and obviously loving Prince Andrei’s betrothed. He’s almost not a character anymore.

It feels weird to say it about a 3.5-hour movie, but this War and Peace feels rushed. It’s a great example of my lack of patience with the idea that well paced movies are inherently better. War and Peace is really “well paced”. It moves along quickly through its entire runtime, hitting every little plot point that the core trio of characters need, but because each scene feels truncated the whole film ends up feeling empty as a result. So, you have a well-paced 3.5-hour movie that ends up kind of boring because no one feels real.

However, while the movie’s story is unengaging, it’s visually engaging from beginning to end. Sets and costumes are richly colored. The photography is intelligently framed with strong depth of field that gives the eye a lot to look at. The acting is generally quite good (especially Mel Ferrer as Prince Andrei), though Henry Fonda is terribly miscast as Pierre. The two battle scenes are a mixed bag, though. Austerlitz is one of the silliest and worst filmed battles I’ve ever seen, but the Battle of Borodino starts of with a fantastic reveal as Pierre sees the battlefield unfold before him, though it descends to a shockingly small scale by the end.

The one sequence in the film that feels appropriately constructed is the French retreat through the Russian frontier. The weather steadily changes. The troops become colder and more desperate. Pierre (as a prisoner) becomes more exhausted and numb to the misery and death around him. It’s a very good sequence overall.

So, I probably like the film a bit better than I should, though it’s still a very far cry from being good. Big novels really aren’t appropriate material for the traditional theatrical film format. They’re simply too big to capture even in three and a half hours.