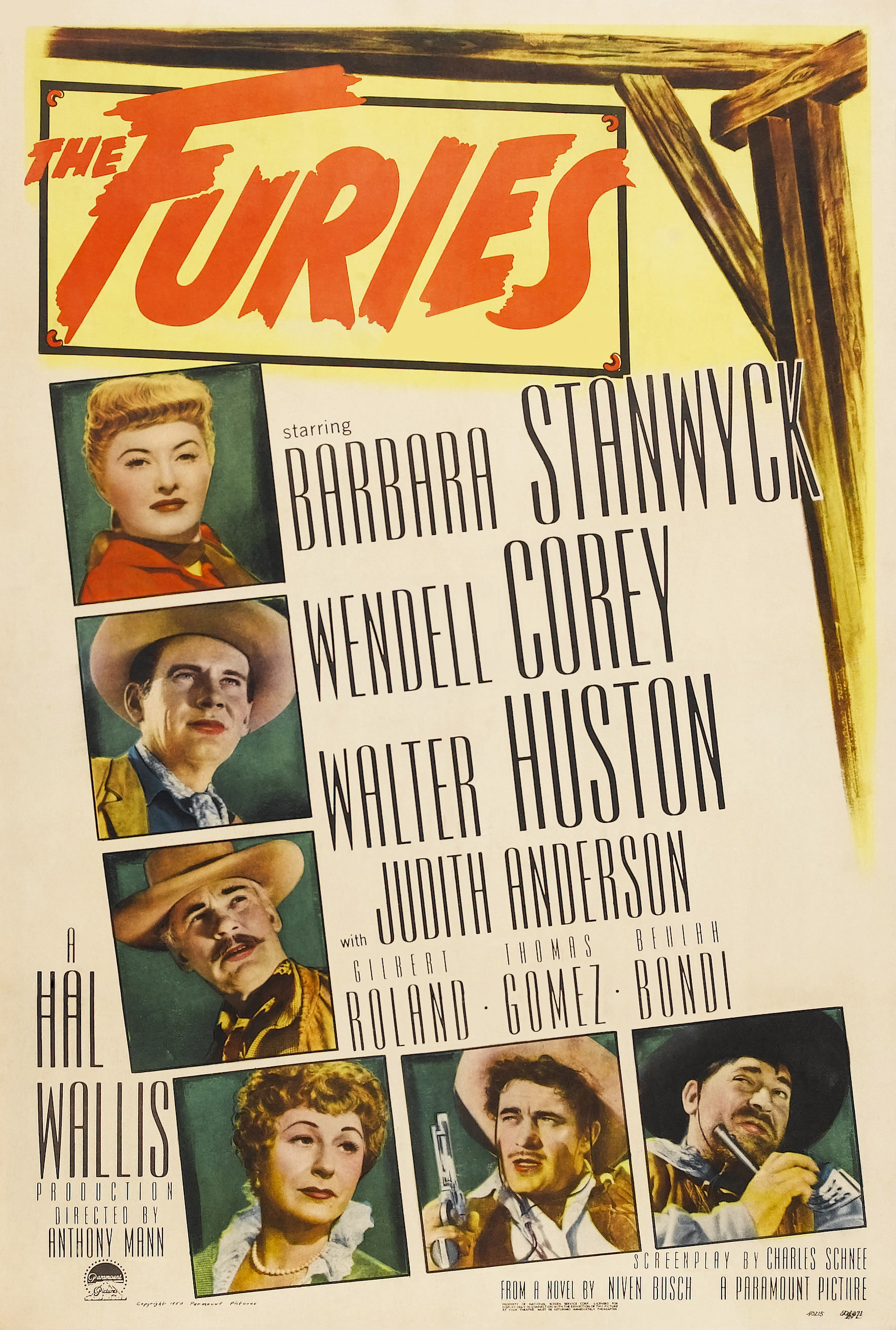 I don’t often make this complaint, but I wish The Furies was an hour longer. A full hour. I love the movie as it is, but there was room to make this a three-hour epic.

The Furies is a generation war between father and daughter about the future of their ranch called the Furies. Barbara Stanwyck plays Vance and Walter Huston plays T.C. Jeffords, her father. The movie begins with Vance’s brother getting married and moving off The Furies to pursue a life away from the ranch. The background of T.C.’s rise to power gets touched on. He was ruthless in gaining the land, taking it from locals, represented by Juan Herrera, a childhood friend of Vance, and gaining it through other underhanded means from people like the Darrows, represented by the son Rip. On top of that, T.C. is shown to be very light on cash to the point that he’s been printing promissory notes, that he calls T.C.’s, and paying his debts with them. He doesn’t seem to have any idea how many of them he’s written.

Vance immediately falls for Rip upon their first meeting at the wedding, despite T.C.’s protestations, and they court for a time. T.C., though, knows how to deal with the situation and offers Rip $50,000 if Rip will stop seeing Vance, which Rip takes. This is a blow to Vance, but she runs to her father anyway, blaming Rip more than T.C. for the breakup.

Here’s the only real flaw in the movie. The movement from this action, which represents the end of the first act, into the next feels like the end of one story and the beginning of another. Rip disappears from the story and we are then introduced to Flo, an older woman from back east that T.C. has brought to marry. Flo’s introduction so late into the film and Rip’s complete disappearance makes this movement rather jarring.

Flo exerts her control over the family to the point that she all but pushes Vance off of The Furies, promising to send her on a tour of Europe away from the family. That’s not who Vance is. She belongs on The Furies, and she won’t leave. In a fit of rage, she throws a pair of scissors at Flo, damaging her face permanently. She then exiles herself from The Furies, but she has a mission.

As the second act wrapped up and the movie moved into the third, I saw how the separate pieces from the first and second acts were going to end up coming together, and I suddenly started loving the movie. Vance goes around, tracking down all the T.C.’s in circulation that she can find, and degrading their value by revealing her father’s inability to back up the notes with actual cash. Through Rip and another intermediary, they work to get T.C. to round up all of the cattle on The Furies for a giant purchase that will save his ownership of the ranch. When he shows up with the cattle, ready to receive payment, he finds Vance and Rip together with a large box of his own promissory notes. He has no other buyer and the mortgage on The Furies is due, so he has no choice but to accept, essentially ceding control of his ranch to Vance and Rip, the couple that the final act has brought together as an item once again.

This movie is just stuffed with story, and, as I said, I really began to love it about an hour in. The first two acts don’t seem terribly related until the third, but it’s a relatively minor concern once the movie has gotten to that point. However, I wanted this movie to have more room to breathe. I wanted it to be the 1950, black and white, The Big Country. A sprawling epic of a generational war. It’s really good as it is, but I imagine the three hour version that exists solely in my head to be truly great.

Le sigh, really good will have to do.

3 thoughts on “The Furies”