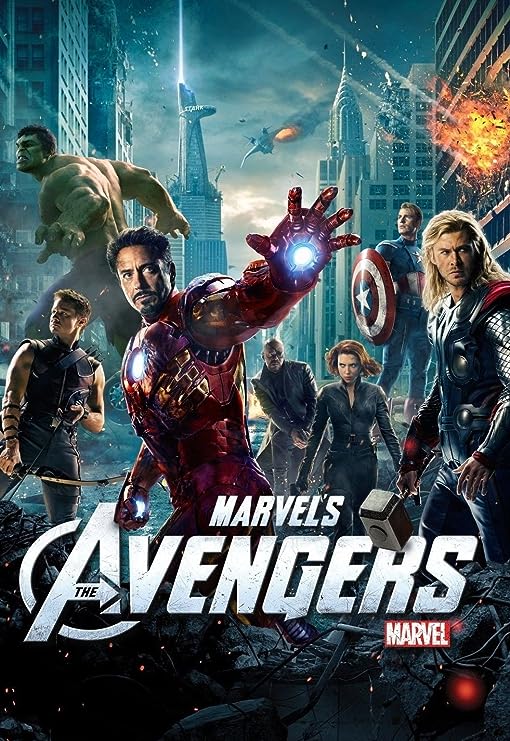 This is the most cohesive film version of a manchild playing with his action figures I’ve ever seen. It reminds me of Van Helsing, but better.

The tesseract, the blue box MacGuffin from Captain America has awoken and called out to the cosmos. SHIELD, the organization tasked with protecting Earth and is experimenting with the tesseract, begins an evacuation as the little box becomes more active. Arrives Loki, slightly grungier and less interesting than we last saw him in Thor, is there to conquer. Telling Earthlings that we were made to be ruled and that freedom is a lie. It saddened me to see Loki, the made driven by a surprisingly complex combination of jealousy, anger, and ambition in his previous appearance relegated to generic bad guy, but oh well. The point of this movie isn’t the conflict between antagonist and protagonist. The point is to get a bunch of protagonists together, struggle to work as a team, and then decide to work together as a team against a bigger threat.

That team is, of course, all of the heroes we’ve met over the last few movies. Iron Man, Captain America, Thor, and the Hulk are joined by some smaller players like Black Widow and Hawkeye. The movie begins in a place where almost none of them have any previous relationship to each other, and the most fun from the film is the different heroes figuring out who the others are. Most have heard of Captain America, but he’s still finding his feet and has an impression of Iron Man that’s pretty accurate if a bit incomplete (impulsive and reckless without noting the heart of gold). Thor shows up and knows no one, only there to grab Loki, so the two Earthlings Iron Man and Captain America have a mutual beat down with Thor over who gets ownership of the captured Loki, drawing a stalemate. Hulk is brought along in his Bruce Banner disguise to help track the tesseract because it has a gamma signature and Banner is the best at tracking gamma rays.

Loki does his best Joker impression and intentionally gets captured so he can try to implode the team arraying against him from the inside. He knows of Hulk (supposedly because he started the movie by infiltrating SHIELD and gaining a few insiders through magical mind powers) and wants him to become the big green rage monster and cause destruction. It’s not the worst plan in the world, but it’s not great either. What it actually is is an excuse to get all of the Marvel heroes into a room and on one side of a larger conflict.

What helps the movie most is its balance of tone. It never gets too serious, keeping things light with quippy dialogue, conflicts between the heroes that never really turn too sour, and a death that’s used for its dramatic purpose before being forgotten quickly enough to not color the rest of the film.

The action of the film is brightly lit and cleanly filmed. The fight between Iron Man, Captain America, and Thor in the forest at night (as Loki sits and watches) moves around dynamically but never becomes confusing. We understand geography easily and the introduction of Captain America later in the fight is handled with ease. The real bright spot in the film, action-wise, is the battle in New York.

With six heroes, one main antagonist, and a disposable CGI army, the film keeps the separate lines of action incredibly clear. Distinctly different locations (from a street to the top of Stark Tower to the top of another, clearly different, building to flying through the air), the film is able to make the visuals immediately communicate where the action is happening and who is involved, creating a marvelous sense of geography in such a large place of chaos. There is a long take late in the fight that passes from one hero to the next, and the amazing thing isn’t the special effects, but the fact that it’s more of an underline of who is where and not a clarifying moment. The conflict ends with the annoying “We’re all done now, bye!” chestnut.

Ultimately, though, while the experience is fun, I think the less interesting version of Loki as antagonist combined with the fact that the movie seems to have nothing to say beyond the facile idea of “good guys need to work together” keeps it from being anything more than an entertaining rollercoaster. Of course, the real goal was to entertain, and I think it does largely succeed.

4 thoughts on “The Avengers”