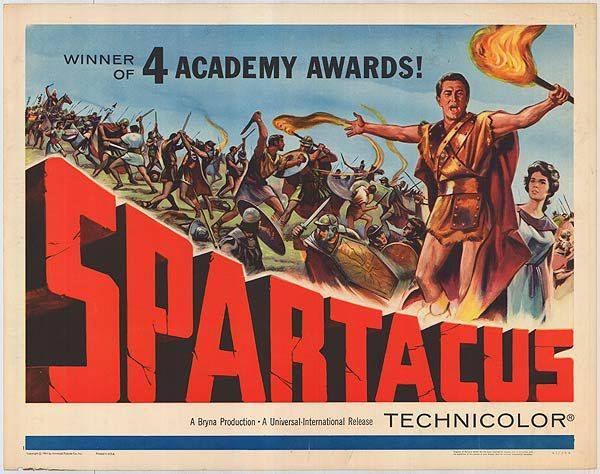 #10 in my Ranking of Stanley Kubrick films.

Kubrick dismissed several of his early films from his canon. Fear and Desire makes sense because of its amateurishness while Killer’s Kiss has some similar problems (though I feel it’s a successful movie overall). Spartacus, though, isn’t about quality but more about authorship.

Out of all the feature narrative films Stanley Kubrick, he produced most of and had writing credits on all of them except Spartacus. The history was that Kirk Douglas, as producer, had hired Anthony Mann to direct the film but fired him (for unclear reasons) after a week of filming. In desperate need of a director as quickly as possible, Douglas called up Kubrick, with whom he had made Paths of Glory, and Kubrick took the job. He hadn’t written a word and had say in only one casting decision (that of Varinia, a character that hadn’t begun filming yet, who was played by Jean Simmons). There is even a story of Douglas asking Kubrick what he thought of the famous “I am Spartacus” scene just before filming it. Kubrick admitted that he thought it was stupid, and Douglas openly berated his director (and, as producer, employee) for the opinion. Notice that this scene was filmed and included in the final cut.

So, I think it’s easy to see why Kubrick, who had such complete control of literally every other movie he made, would feel a certain distance regarding Spartacus. It’s more of a creative output for Dalton Trumbo and Kirk Douglas than Stanley Kubrick.

So, Spartacus is a curio in the Kubrick filmography. It sticks out like a sore thumb. It’s too bright, colorful, and optimistic, and yet it’s still good.

The slave Spartacus gets purchased from a salt mine to a gladiatorial school where he learns how to kill. When the Roman senator Crassus visits the Batiatus, the owner of the school, he pays for a pair of to the death combats. This is the spark that leads to the beginning of the slave revolt the next day. Spartacus leads the gladiators to form into an army and raid, pillage, and sweep across southern Italy to a port city where they will pay for ships to carry them away from the Roman Empire.

The movie is at its best when either Crassus, played by Laurence Olivier, Gracchus, played by Charles Laughton, or Batiatus, played by Peter Ustinov, are on screen. They are thankfully center stage for much of the film. Crassus is the personification of Rome at its most dangerous, affluent, and corrupt. A man of no morals, he revels in his power over the world. Gracchus is a man of appetites who revels in the fights of the Roman Senate, countering Crassus with intelligence and wit. Batiatus is a working man who built up his wealth through the creation of his gladiatorial school. He shares a special corpulent bond with Gracchus and the two have some of the most fun written scenes in the film.

Spartacus, unfortunately, is just not that interesting. Once freed from slavery, his drive of necessity is replaced by a gauzy need for freeing slaves. He’s purely an idealist of no fault. This is a direct result of Dalton Trumbo’s communism. The way he painted Spartacus, as the faultless ideal, was in line with the then socialist artistic norm of portraying what was essentially the New Socialist Man. Douglas liked this because he got to play the hero, but Kubrick thought he was uninteresting and a wash of the more interesting history of the real Spartacus who unnecessarily turned from northern Italy towards Rome to continue raiding instead of escaping like he could. But, as we’ve already seen, Kubrick had little say on this movie’s characters and story.

There are hints of themes that Kubrick had been, and would continue to, dealing with. The first hour at the gladiatorial school is all about the dehumanization of man at the whim of a larger, impersonal, and inhuman system. This falls directly in line with the events of Paths of Glory. The ending of both movies echo each other to certain degrees. In Paths of Glory sees the system win, as it does in Spartacus. However, in the Roman epic, there are hints of optimism as Varinia holds up Spartacus’ baby boy to him, pledging to carry on the boy’s father’s name and cause. That sort of optimism is missing from Paths of Glory, and, really, most of Kubrick’s filmography until Eyes Wide Shut, I think.

Where Kubrick was able to shine was in the movie’s visual design. He had little say in set construction, costumes, and locations (though he apparently convinced the producers to shoot the famed battle in Spain instead of America), but he had full control of his camera. Compositions carry that intelligent and clear dynamism he was known for. The most striking imagery might be the gladiatorial fight between Spartacus and Draba. In the foreground we see the two in their small box as two others rise, pass through the narrow opening at the center of frame with Marcellus in the middle and Crassus at the top of frame. It’s an elegant composition that shows a visualist making the most of the conditions he had.

There are also several action scenes that are surprisingly well filmed. Not that I don’t imagine Kubrick had the ability, but the most action he had filmed was the chase in Killer’s Kiss and the long tracking shots over no man’s land in Paths of Glory. They were nothing like the dynamic and violent action in the gladiatorial fight, the uprising, and, especially, the battle near the end of the film.

In the end, the movie’s certainly good, but it’s got too many authorial hands moving it in different directions. Instead of William Wyler getting support from producers and star to make Ben-Hur in the best possible way, we had a screenwriter insisting on less interesting characterizations, a producer and star who seemed more interested in making himself look good than telling a story, and a director that couldn’t pursue anything like his own vision. It’s a compromised film that amazingly works as well as it does.