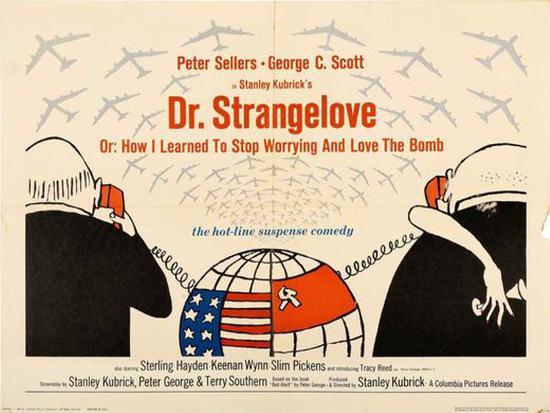 #4 in my Ranking of Stanley Kubrick films.

Mutually assured destruction is inherently absurd because no sane person would trigger it. Only a crazy person would do that, and once that happened all the sane people would try to prevent it. That’s the basic premise of Dr. Strangelove, and Kubrick takes the concept to its absurdist end with the kind of ironic humor that obviously tickled him (with a healthy smattering of Peter Sellers, of course).

General Ripper sends his air wing to launch a nuclear strike against the Soviet Union using Wing Attack Plan R, a plan that gives him authority to strike Russian targets without presidential authority in the event of an attack that incapacitates the president. Except nothing has happened save that the conspiracy in Ripper’s head has reached a point where he feels it’s necessary to begin a war to wipe out the Soviet Union and preserve the purity of his bodily fluids. He’s obviously gone off his rocker and out of line because only a crazy person would start a nuclear war in a place of mutually assured destruction.

These actions bring the president, his cabinet, and the top brass of the military to the war room in the Pentagon. They discuss the situation, any methods to recalling the bomb wing, and how to get to Ripper to force him to recall the attack. The president also invites the Russian ambassador who reveals that the Soviet Union has created a doomsday device that detects a nuclear explosion on Soviet soil and destroys the world (the premier was going to announce its presence to the world on Monday).

They do manage to get the code after overrunning the base except for one plane that has damaged communications equipment and ends up going to a target not their own where they release the bomb and initial world destruction.

I’ve never really appreciated how funny this movie is until this viewing. Yes, Peter Sellers does have his moments (I think he’s best as the British officer Mandrake), but, in terms of performance, it’s George C. Scott that gets me chuckling the most. His facial expressions are wonderful acts of cartoonish emoting that fit marvelously well with the absurdity of the situation in the movie. Slim Pickens’ oversized personality meshes really well with his character Major Kong.

Outside of performances, the movie really embraces absurdism and irony as modes of comedy in the face of world ending consequences. The scene around the Coca Cola machine is emblematic of that. Mandrake, freed from Ripper’s office where he’s been trapped for some time, needs to call the president and tell him the recall code. Only the regular telephones work, so he has to come up with the change to make the call. He runs through with the operator about connecting him to the president in the Pentagon and the different options to make the call (person to person, collect, and station to station). He doesn’t have enough for person to person. The Pentagon refuses the collect call. And Mandrake doesn’t have enough for the station to station call either. So, he convinces the American officer escorting him to shoot the lock off the nearby Coca Cola machine for a few more cents to make one of the most important calls in world history. There’s an expectation around how that sort of call should happen, and it does not involve pay phones, haggling with an operator, and getting change from a nearby soda machine. The contrast is where the funny happens, and the contrast in that situation is purely absurd.

One of the things that I only really appreciated on this viewing was the absurdism at the movie’s core. I used to take the film far more literally and specifically as an attack on American policy and I would quibble with it. Once I got the reading I got, everything slid into place. The very idea of mutually assured destruction is absurd and only a madman would trigger it. Once done, the rest of the sane world would come together to make sure it didn’t happen. That’s one reason that the calls between the American president and the Russian premier are so funny. It’s two adversaries suddenly thrown together to prevent what they had been actively building up to.

The movie’s slyly funny in several ways, great to look at, and with some wonderfully iconic imagery. That sight of Major Kong riding the bomb to the ground is just so fantastic. There are obvious sexual metaphors everywhere, implying a Freudian connection between war and sex, that heightens the comedic value as well. This movie is a classic for good reason.

6 thoughts on “Dr. Strangelove or: How I Learned to Stop Worrying and Love the Bomb”