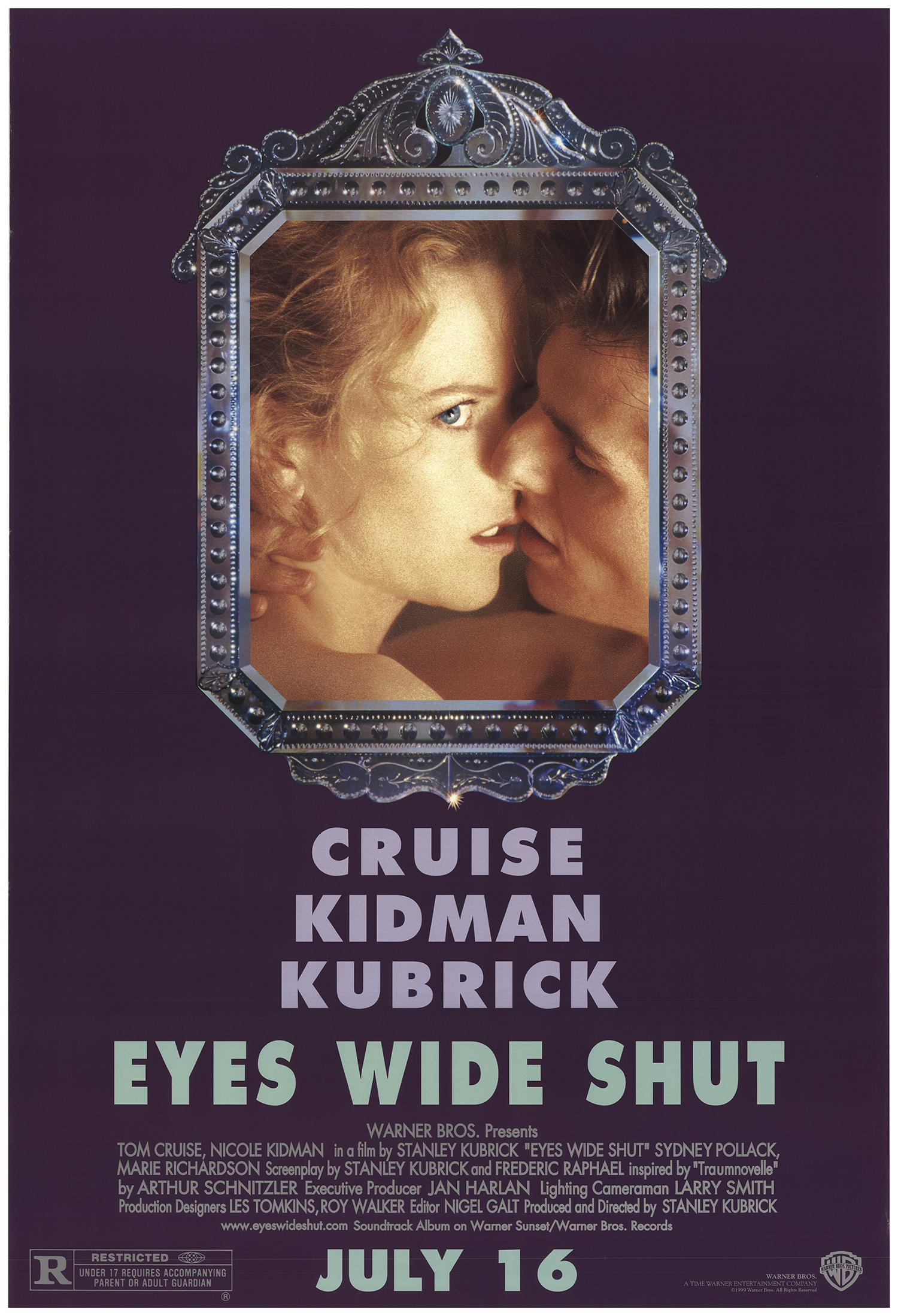 #6 in my Ranking of Stanley Kubrick films.

This might be the best approximation to the experience of a dream in film. Dreams are hard to realize because they don’t follow a lot of the basic rules of logic and storytelling we’re used to.  The only other movie I can think of that works this successfully at building the illogic of a dream is Dario Argento’s Suspiria.

Bill Harford is a doctor in Manhattan whose clientele includes some very rich people. One of these millionaires, Victor, invites him and his wife Alice to a swanky Christmas party in Victor’s large Manhattan mansion. There both husband and wife are presented with opportunities for infidelity. Bill is approached by two models who instantly try to seduce him, dragging him away from the party with implied promises of a threesome while Alice dances with a charming older Hungarian man who makes it very plain that he wants to sleep with her. Alice, despite her drunken state, turns him down, but Bill seems to be on the edge of saying yes (or possibly no) when he’s pulled away by Victor’s man to deal with a crisis. Victor had taken a prostitute upstairs who took a bad combination of heroin and cocaine before passing out. Bill coaxes her back to the land of the living in a very professional manner, taking seemingly no notice of the attractive body before him.

The next night, Bill and Alice put their daughter to bed and get a little high. Alice goes on a tirade about Bill’s view of women and sexuality, attacking his preconceived notions of the depths of her fidelity to him when she reveals a fantasy she had about an attractive naval officer the year before. He receives a call about a patient who just died and uses the excuse to leave the house. Consumed with images dancing in his head of Alice romping with the officer, Bill starts a journey that extends well into the night that puts him up against several different forms of temptation.

First is the grieving daughter, engaged to another man, who throws herself at Bill in the midst of her sadness. He’s there in his professional capacity and lets her down gently. Second is a streetwalker who gets Bill into her apartment with the understanding that he’s going to pay her $150 for sex. A call from Alice on Bill’s cell phone ends his desire for the romp, he pays the girl for her time, and leaves without more than a chaste kiss. Bill then runs into an old friend, Nick Nightingale, who is a jazz pianist and tells Bill about some crazy shindig he’s got lined up in a couple of hours. Bill just has to follow, which he does after he procures a tuxedo, cloak, and mask from a closed costume shop.

The next day, Bill tries to reclaim the images from the night. It’s like he’s trying to reconstitute a dream after he’s waken up. He tries to find Nick, but he’s missing and the hotel clerk tells a strange story of Nick getting forcefully led away. He returns the cloak and tuxedo (having lost the mask) to find that the raucous scene he had interrupted the night before is now calm. He tries to find the prostitute only to discover that she’s left and her roommate lets him know that she had just that morning received blood test results that showed her to be HIV+. He then goes back out to the mansion where the orgy took place and receives a written threat to stay away.

The Odyssean journey that Bill goes through, as I wrote before, seems to wonderfully capture the logic of a dream. Every stage of a long dream has its own internal logic. The centerpiece for that kind of logic is the costume shop to me. It starts normally with Bill talking through an intercom to the owner of the shop only to find out that it’s not whom he expects. The man is shaggy bearded with a long robe and lets him into the place that’s darkly lit and filled with mannequins demonstrating certain costumes (this being a Kubrick film, the costumes are mostly of the Napoleonic era). Then the rules of the encounter change when a bump introduces a new element, two Japanese men romping with the costumer’s underaged daughter. The costumer locks up the Japanese men and then proceeds with the transaction, getting Bill his tux, cloak, and mask. It’s such a weird progression of events and it captures rather perfectly that effervescent feeling of the dream world.

On top of that feel we have a fascinating exploration of the intersection of love and lust. Where does trust end within an established relationship. Bill and Alice have been married for nine years. Should they be comfortable with that fact or should they still worry about not only their spouse’s fidelity but their own in the face of a sea of temptations? Bill walks through literal orgies and comes out without having succumbed to temptation, but was presenting himself with the temptation to begin with damaging to the relationship he has with Alice? She sure does seem broken up by it when he admits to it. It’s a wonderful exploration that leaves with a sense of hope that things may just end up working out.

The movie is as well really well filmed. Kubrick continues using his Steadicam in much the same way that he did in The Shining, implying an other world that doesn’t conform to the rules of our own. A small side note, but there’s a small bit in the movie Filmworker about Leon Vitali, Kubrick’s personal assistant, where Vitali describes one of Kubrick’s outbursts and he used the example of lens flares in Eyes Wide Shut. I think I saw all of them this time through after seeing Vitali mention it.

But yeah, I find the movie completely enrapturing. It’s a descent into dream logic and another world while also touching on themes that are extraordinarily grounded. I think it’s an underrated work from one of the greatest of filmmakers.