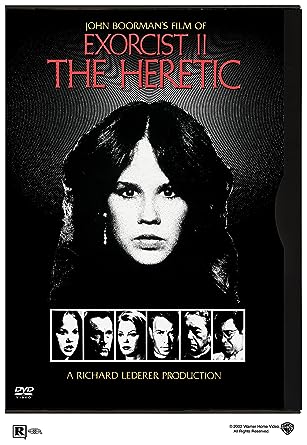 Welcome to 1977, David. Everyone else has known that this movie was insane nonsense for more than 40 years, and you just found out. Time to tell the world!

Watch this and Zardoz and tell me the John Boorman is anything other than a crazy person. Read about his proposed adaptation of The Lord of the Rings (that eventually morphed into Excalibur) and tell me that that man is not an absolute nutjob. I have a slight affinity for him, by the way. I think crazy people are the kinds of people studios should occasionally throw gobs of money at. Darren Aronofsky is the modern filmmaking world’s version of the 1970s John Boorman.

He failed utterly at finding a way to create a sequel to The Exorcist, by the way. In fact, by the end, it’s just a repeat of the final confrontation with Pazuzu involving Father Lamont instead of Father Merrin. It simply takes a confusing and unnecessarily byzantine path to get to that ending.

Four years after the events of The Exorcist, Regan MacNeill has moved beyond her possession and is trying to live a normal life, while also spending every day after school with a psychiatrist who works in some kind of glass Panopticon. Now, I have to sidetrack this plot summary right at the beginning to talk a little bit about set design.

When you see a location in a film that you normally associate one way, but this particular movie does something completely different, that’s not by accident. That’s not a mistake. That’s deliberate, and the filmmakers are trying to strengthen thematic and character beats with visual motifs. So, as soon as I see this glass and mirrored hellscape of a doctor’s office, I would normally start wondering why there is so much glass and so many mirrors. It extends even to Regan’s apartment that has just as many mirrored surfaces and large panes of glass. However, my thinking never really got there because the movie that was playing through those locations was so completely impenetrable and filled with characters who didn’t seem to understand human interactions. There was no point to ever consider the idea of doubles (extended from mirrors) and translucence (as implied by the glass), because the central themes were so jumbled and unreadable as to make what could have been interesting visual support completely pointless. As I said, John Boorman is a crazy person.

So, anyway, Father Lamont (a very drunk Richard Burton) is sent by the Vatican to investigate Father Merrin’s death (four years later…er…movie). He shows up and manages to use a science fiction nonsense device to do something really unclear that inserts him into Regan’s mind or dream. This bit of science fiction is really unclear. The original kept its science fiction concepts much clearer, I just have to say. Anyway, moving beyond it because the literal technology doesn’t actually matter, the important thing is that Lamont discovers that Pazuzu wasn’t actually driven out of Regan. The demon still resides within her. Now, the way this whole scene plays out is laughably done with lines of dialogue that contradict each other said right in a row, the absurd technology, and the fact that Lamont gets to use the machine at all. It’s all in the service of another visual, Regan and the memory form of a possessed Regan grasping at her psychiatrist’s heart, battling over it. Again, this could be an interesting visual metaphor, but the movie is so confused that it never really takes hold beyond its basic visual impact. It’s empty.

Lamont ends up travelling to Africa without the Vatican’s permission to research the history of Pazuzu, getting around the continent with seemingly no trouble whatsoever. It’s all very confusing with attempts at some kind of visual poetics that never really connect because the ideas of the visuals are, again, completely unmoored from the narrative around them. Again, John Boorman is a crazy person.

Eventually, Lamont gets possessed by Pazuzu, though that’s shockingly unclear, and everyone descends upon the house from the first movie for…reasons, and we get our repeat of the first film’s climax. Except that Lamont doesn’t sacrifice himself like Father Merrin or Father Karras. Instead, Lamont just defeats Pazuzu in a second Regan body (again…sense is not allowed in crazy person John Boorman’s films) and takes her away…or something.

Reading about the film after watching it, I was most drawn to the positive notices that the film got. One of them was from Martin Scorsese himself who noted that the theme of the film was about how great good invites the creation of great evil. And this is an idea that gets touched on a couple of times in the film through voiceover, but the movie only slightly deals with the idea dramatically. There are hints that Regan is some kind of great healer somehow (she talks to a young girl who has apparently never spoken before her introduction who starts speaking mere seconds after her introduction), which is supposed to mean that Pazuzu is trying to take over her because she’ll be a great force for good. That’s a great idea, it’s too bad that very little of the movie actually pursues that idea. Apparently the movie went through five drafts after Linda Blair signed on to what she thought was going to be a good follow up to The Exorcist, and I think it shows. There are pieces of completely different movies in here, the most glaring of which is the repeated ending that doesn’t seem to belong at all. I don’t know who to blame for that, but I think there’s probably enough to share between crazy person John Boorman and his producers who wanted to make sure there was a good exorcism in their Exorcist movie.

So, yes, in short, I have joined the rest of the world in discovering that the first Exorcist sequel is a confusing, unengaging, and delirious mess of two hours. No wonder people booed it and threw things at screens.

A final note: I’ve read that John Boorman lays a lot of the film’s negative reaction to the idea that Exorcist II: The Heretic doesn’t deliver the same kind of horror that the original did. I think that’s pure poppycock. The first film wasn’t exactly a modern blockbuster horror delivery device for jump scares. It was a steadily paced film that was as much a character study of Father Karras as it was a horror film, most of the tropes of which didn’t really appear until the final half hour. People reacted badly to The Heretic because it made no sense, was horribly constructed, and was the fever dream of a crazy person without any guard rails. It makes Zardoz look like something made by Christopher Nolan.

2 thoughts on “Exorcist II: The Heretic”