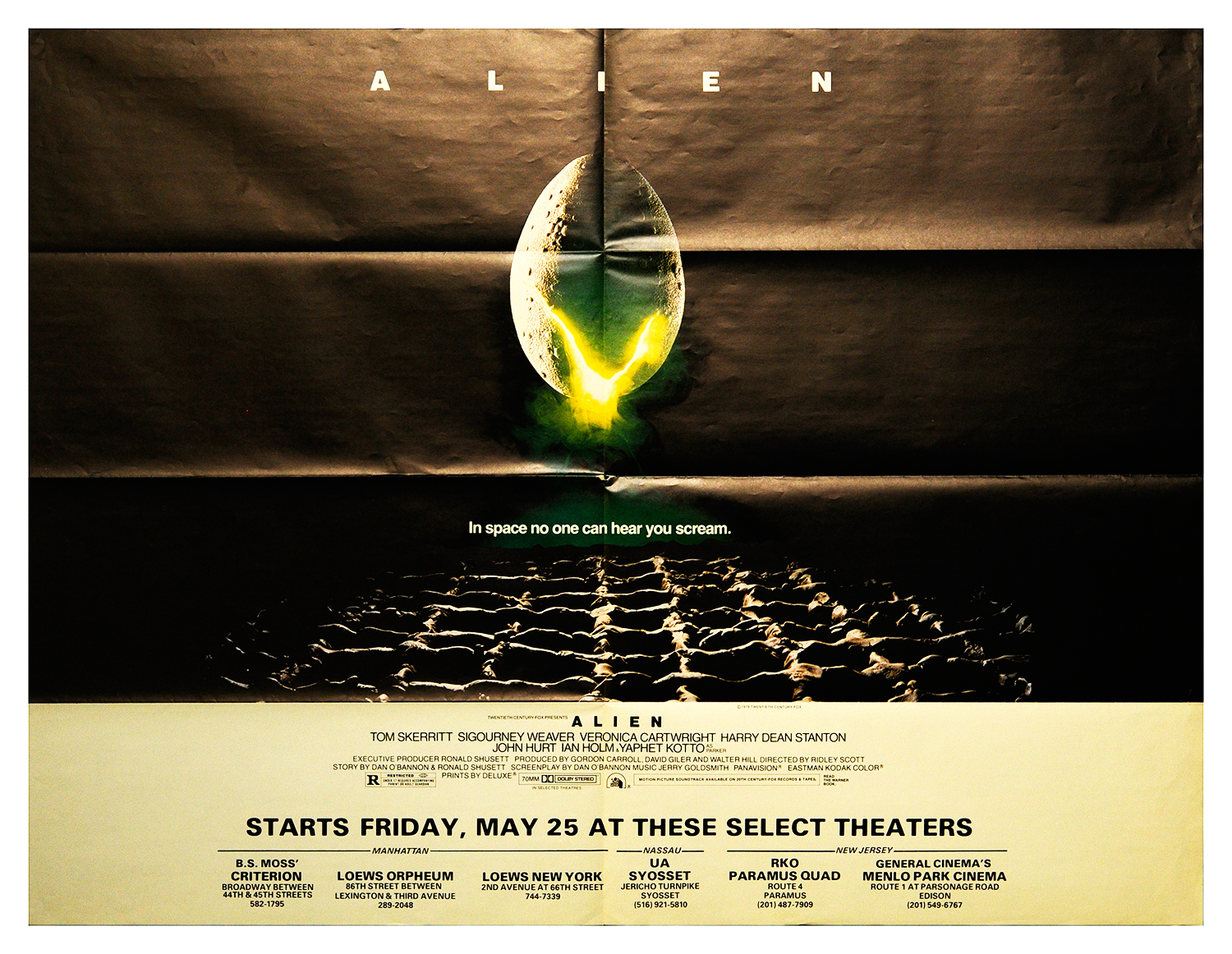 #1 in my Ranking of the Alien Franchise.

The title to this movie is so utterly perfect, much like the rest of the film. In terms of straight entertainment, I find Alien to be a pinnacle of tension building terror in film. It’s one of the most thoroughly entertaining horror movies ever made. I love Ridley Scott, I call myself a Ridley Scott fanboi, but he hasn’t matched Alien in his career since though he’s come pretty close.

The Nostromo, a hauling vessel, is pulling tens of millions of tons of ore across the galaxy. It’s crew is in suspended animation for the duration of the trip, but their onboard computer, Muthur, wakes them up early when she receives a signal of unknown original coming from a nearby planet. The crew goes down to the surface, investigates, gets an alien organism attached to one of their faces, and come back on board. Famous images happen after the creature on the face lets go and dies and another alien creature bursts forth from the crewmember’s chest. The alien grows, killing the crew one by one, until there’s only one who escapes.

Okay…plot summary done. There’s so much that makes this movie work as well as it does, but I think the best place to start is that title. “Alien” implies something from the outside coming in. An alien, in terms of earthly immigration, isn’t an alien if they stay in their own country. They become an alien by entering another country. “Alien” also implies something strange and different from normal experiences. The alienness of Alien isn’t just the fact that we have an extraterrestrial, but that it’s coming from the outside and coming in, uninvited, I might add.

The crew feels like a group of siblings. There’s no hint of romance between anyone, and they all bicker like brothers and sisters with Dallas (the captain) acting like the eldest brother. Their mother (Muthur) guides them and directs them. It is into this family unit that the outside entity, the xenomorph, gets introduced, but to take the motif and theme further, it manifests in a literal invasion of the crewmember’s (Kane’s) body. The terror, much like that in The Shining, comes from an external force invading something that should be held free of invasion, a form of a family.

There are a couple of additions to that external pressure to the family unit. Ash, the science officer, we learn later, was added to the crew only two days before their departure from earth. Ash is obviously not really part of the team. He’s always just a bit apart and he acts less comfortably in the group than the rest. He’s actually an android and he malfunctions in pursuit of his secret mission. Muthur herself is influenced by outside forces, turning her against the crew. She and Ash share the same secret mission, to retrieve the alien at all costs, leaving the crew as expendable. That outside influence perverts the warm cocoon of Muther’s room (all soft white lights in the middle of the dark metal grays of the rest of the ship) into something sinister.

The idea of invasion is so complete in the film’s packaging of terror and fear. It’s pervasive in every instance of how it works. The idea of danger hitting you at home is almost primal, and to see the home of the Nostromo attacked from the outside in so many ways, as well as the bodies of those crewing it, is the foundation of what gives the movie its visceral power.

Those ideas would be nothing, though, if the movie built on them weren’t well done, and Alien is a triumph of design. From the lived in and grimy feel of life on the Nostromo (at least partially influenced by the design of Star Wars) to the alien vessel that does a wonderful job of feeling otherworldly, and to the fantastic creature effects that are filmed perfectly to highlight them in just the right ways, Ridley Scott brings a level of sophistication to the visual world that heightens the experience, sells the reality, and deepens the terror. One of the more interesting subtle things Scott does is how he frames the characters. At the beginning, everyone’s filmed rather flatly. Ash stands out a bit, but everyone else, especially in the first scene at the dinner table, shows the rest of the crew in the same clarity. No one really stands out, but as the movie goes on, the crew diminishes, and Ripley asserts herself more, she gains more of the frame. There’s also the bit where she makes the final plan with three others in the room. For much of the scene, she’s the only person in the foreground and everything and everyone behind her is completely out of focus.

I also want to put special focus on the final sequence on the Nostromo from the point Ripley starts the auto-destruct sequence until she leaves on the lifeboat. It’s purely an audio and visual assault on the senses, and it works perfectly. Tension is already super high and we get this regular beat of strobes and a loud alarm that just reaches out and grabs the audience. With the alien just around the corner as well, it’s one of the greatest audio and visual tour de forces in popular cinema.

Tone is handled pitch perfectly with unease seeping into every scene, and the lighter scenes never really getting that light. Acting is top notch (the Harry Dean Stanton rule definitely applies here). Everything about this movie works just so incredibly well, creating a complete package of terror based on familiar fears in an unfamiliar setting. I consider it one of the great movies.