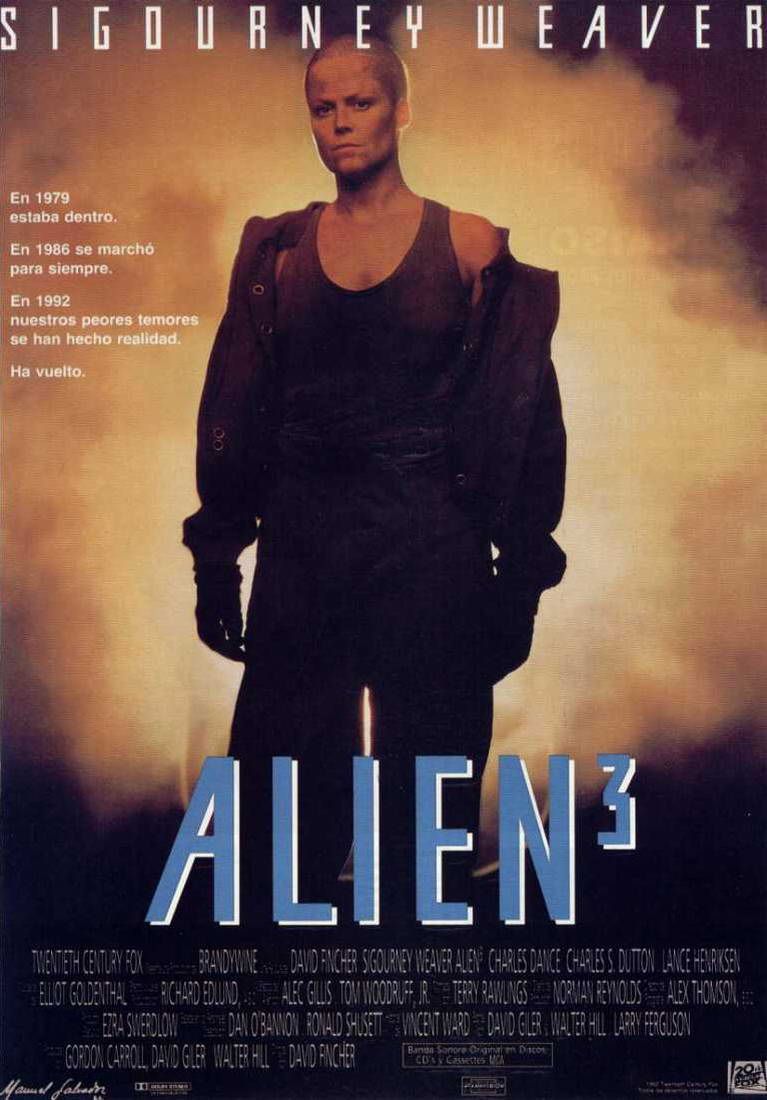 #7 in my Ranking of the Alien Franchise.

It seems trite, but the first two Alien films were about family. The first film was about the dissolution of a family, and the second was about the assembling of another. The second film left our new family in a prime position to face a new adventure, but the very first thing Alien 3 does is kill off three of the four surviving characters. That is a bad move and a great example of how to do a sequel wrong. The array of writers, producers, and directors had ended with a product that could see no attributes of the previous films other than the presence of a particular actress. Ignoring a strong foundation for future character developments, the movie settled with Sigourney Weaver.

They even went the wrong direction in terms of the horror. The second movie upped the ante on the horror from the first. This third movie draws it way down. We get one alien again, so it feels small in comparison to the second. And, because the movie is thematically incoherent, there’s no real sense of what kind of horror the movie is trying to establish other than some thin visceral action based horror, but that doesn’t match with the smaller threat the single alien represents. We do get a repeated motif of an outside entity breaking up an established “family” of sorts, but Ripley herself is outside of that family and never becomes part of it, but she’s our main character. So is she the terror herself? This never gets brought up or sorted out, and we just end up with a creature feature and blood instead. It’s just not nearly as interesting as the first two in terms of the nature of the horror at play.

I will say this, though, the opening credit sequence is probably the best part of the whole movie. In between starfields with the credits we get quick cuts onboard the Sulako, catching the audience up to the incidents that lead to Ripley finding herself crashed and the only survivor on Fiorina 161, a prison planet. The music is just right. The quick cuts elicit a stark mood. Everything is really nicely lit. It’s just too bad that it’s in service to a terrible idea.

Anyway, Ripley finds herself as the only female amongst twenty-five residents of this convict planet (landing so close to their little colony was quite lucky of her). The movie very slowly meanders from one scene to another for an hour as we learn about the colony, the weird mixture of criminals and religious zealots that inhabit it, and we watch a facehugger attack a dog. Now, this movie has some logistical problems that just help make it seem completely nonsensical. The facehugger is the first of them. Based on what we know, a facehugger will die after it implants its egg in a host. The opening sequence reveals only one egg, and we find out later that Ripley was impregnated while she slept. There’s never another facehugger found, just the one that attacks the dog. So…are they able to impregnate twice now?

Whatever. We also find out the backstory of Clemens, a non-convict/ex-convict/medical officer with a penchant for not telling his backstory until halfway through the movie and right before a xenomorph punctures his head. It’s honestly not that interesting a backstory to begin with, and the long wait to actually get to it doesn’t help things. It also doesn’t help things that Ripley spends a solid hour finding out information that we’ve known since the first three minutes of the film, namely that a facehugger was on the Sulako and impregnated her (it was a safe assumption, that last part). So, the first hour is Ripley being depressed, Newt’s autopsy, an alien growing, and a bunch of convicts, all but a couple of which won’t matter later.

The second half of the film, after Ripley finally figures out that a xenomorph is running around, is even more frustrating. We have two separate sequences of the convicts readying traps for the alien. The first ends almost hilariously when the alien bites someone’s head off which leads to a flare dropping and lighting an entire tunnel system on fire. The second sequence is completely incomprehensible. It involves another tunnel system that’s supposed to lead to a space that will force the alien into a large iron mold where they will douse it with liquid iron. This entire chase is completely unintelligible. There’s absolutely no sense of geography, so we don’t know where people are running from or where they are running towards. We don’t know how many doors need to get shut, and, to top it all off, we’re mostly following characters we don’t know and don’t care about. Yeah, the xenomorph’s perspective shots are kind of neat and fluid as they spin around the small tunnels in pursuit, but that’s not nearly enough to make up for the fact that there are so many rules about how to make this plan work and the movie never bothers to even try and explain any of them.

Then, the company shows up, promising to save Ripley and kill the alien growing in her chest. She makes the first smart decision of the movie by anyone and refuses to believe them, throwing herself in the furnace, killing herself and her baby. This also raises another question. None of the other movies were ever that clear on the alien’s gestational period in a host, but there are two aliens that grow within characters in this movie, the one in Ripley and the one in the dog. The one in the dog is implanted long after Ripley’s was implanted and comes out long before Ripley’s comes out. This is never explained (though I guess some kind of “it’s a queen” logic might fill in that gap). Still, it feels arbitrary rather than intentional.

The movie’s core problem really is, though, that it’s a conflict of visions. The story behind the making of this film is far more interesting than the film itself, which is mostly just kind of boring and frustrating. Long story short: the studio had no idea how to follow up Aliens, and they could never hire either Cameron or Scott to come back. They went through a few creatives before settling on Vincent Ward, an Australian director, who had a wild idea of this wooden world populated by monks in space that Ripley lands on. The studio was excited by it for a while before they pulled away from the wooden world idea, and the monks, and replaced it with a prison colony and convicts. The problem is they never really rewrote the script completely, so the end result has all of this religious talk that never really fits and never goes anywhere. The ideas clash horribly, and David Fincher was caught in the middle. Hired as the kind of director the studio can push around, he was endlessly abused by 20th Century Fox until he completed his work on the movie and washed his hands clean of it.

That’s not to say that the movie is completely without worth. Weaver isn’t great in this because Ripley doesn’t have a whole lot to do, but I do like Charles Dance and Charles S. Dutton as two of the residents of the convict planet. The aforementioned alien perspective shots are fun, and I really like how they recalled a little bit of the previous movies and made the alien impervious to adverse elemental conditions, manifested by it being able to survive the molten hot lead. Killing the alien covered with the hot lead by quickly cooling it with water is a fun idea and executed pretty well. The counter there is that this is the worst looking Alien movie, with early CGI that doesn’t hold up well at all and some awful compositing, especially in that hallway chase.

A handful of nice things, though, don’t outweigh the movie’s huge flaws. This movie is a disaster.