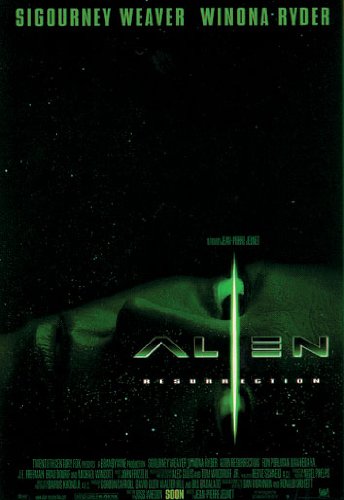 #6 in my Ranking of the Alien Franchise.

This is the first movie in the Alien franchise that makes no attempt to be a horror film. Instead, it’s a blackly comic action movie, and I think it sort of works. Sort of.

There’s a lot of handwaving away of certain practical elements like the source of DNA used to clone Ripley, or how her DNA includes the DNA of the alien, or how, if they had both, they couldn’t just clone the alien and not Ripley. But, hey! If they don’t do this, then there’s no movie! So, handwaving is somewhat appropriate.

What that creates is a character that looks like Ripley but is not actually her. There’s talk about her inheriting the original Ripley’s memories (through some handwaving), but there’s never really an exploration of Ripley dealing with the fact that she’s not really Ripley. She just kind of becomes a more badass version of Ripley because she’s got some alien traits now. This could be an interesting place to start Ripley. She’s new, not quite the same, not quite sure of who she is or what her new relationship with the aliens is. But, she’s lost in the movie.

The plot of the film is standard Alien stuff. A shady organization (the military this time) wants to capture the alien and use it for its own purposes, but the alien cannot be controlled and runs amok. At the center are a group of working class people who have to find a way to fight back and escape the enclosed space they are trapped in with the antagonistic aliens. All of the Alien movies have this basic plot, so it’s hard to hold that against the fourth entry.

The single largest problem with the movie is the fact that it tries to be an ensemble piece, but it’s a grand 108 minutes long with extended action sequences. That’s not a lot of time to spend with the array of characters that Joss Whedon wrote and Jean-Pierre Jeunet created as the writer and director. Ripley gets lost among the other characters like General Perez, Call, Dr. Gediman, and Vriess. You would expect the movie to cull the herd like the rest of the franchise does, but a shocking number of characters survive to the end, further muddying the waters. Cutting the cast down from the beginning, or killing off a lot more at the start of the mayhem, may have allowed a bit of narrative clarity that the movie as it stands currently lacks.

Where this movie shines is in how it embraces weirdness and black humor. Reactions to deaths, odd designs, and Dan Hedaya’s entire performance provide regular, if intermittent, comedic value to a movie that would otherwise be rather dreary. Ripley’s own complete nihilism is a good source for some laughs as well, though her sudden scene of attempted pathos when she comes across the seven previous attempts at clones falls flat in comparison.

Probably my favorite bit of weirdness, though, comes near the end. Long after the Queen taken from Ripley’s chest has laid a series of eggs that have birthed facehuggers that have subsequently impregnated human subjects with xenomorphs (this life cycle is complex), we discover that the Queen isn’t actually laying eggs anymore. There’s no real explanation for the change, but we do get the magnificent image of an alien Queen laid back with her legs spread wide and a giant womb that births a weird alien human hybrid. I do not understand how that image could have ever been intended as something serious. It’s just simply way too out there and bizarre for that. It has to be an attempt at absurdist humor, and I embrace it as such. The design of the hybrid seems like a reasonably logical extension of the idea, but it’s still so thoroughly off-putting (especially that little upturned nose at the end of its snout) that it feels like poorly executed weirdness.

The action scenes are reasonably well executed, but the only one that really stands out is the underwater chase. I suppose it stands out most because it’s unlike anything in the franchise up to that point and it’s the first one that includes a fully CGI (and rather well done) xenomorph that moves swiftly through the water. There’s no real terror to the image, though. The movie embraces the visceral nature of the beast but never really tries to make it scary.

Still, the movie’s a mixed bag. I appreciate the humor and some of the design, but I find the story overall confused and the rest of the design uninspired or off-putting. It’s not the complete disaster some people make it out to be. If it weren’t funny, I’d agree, but those chuckles I get through the film carry it quite a bit.