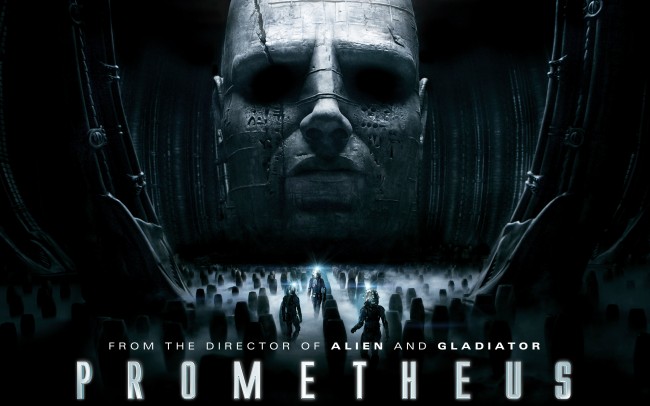 #3 in my Ranking of the Alien Franchise.

Out of all the opinions I’ve expressed about film, my love of Ridley Scott’s Prometheus is probably the one that I receive the most grief over, and I do not care. I’ve seen this movie seven times now, and I love it as much after the seventh viewing as I do after the first. This movie is great.

It’s about searching for truth and the nature of faith. I think it meshes well with the ideas behind Close Encounters of the Third Kind, though they would make an odd double feature being so different in style and tone. Any actual answers that the movie offers (which are few) are beside the point. The point isn’t the answers themselves, but the searching for them is what is important.

The crew of the eponymous Prometheus is travelling trillions of miles into deep space chasing a series of cave drawings that seem to be an invitation to the home of the Engineers, giant beings who may have had a hand in the creation of human life. Funded by Peter Weyland, a man who speaks to the crew in the form of a hologram message, the ship is out with the mission to find the answers to our existence. Why do we exist? To what purpose were we created? These existential questions are woven into the fabric of the whole movie. Elizabeth Shaw, the main character, is looking for the same answers to the same questions but from a different point of view. She comes at it from a point of faith. Her boyfriend, Charlie, is a man of the moment with little concern for the metaphysical. Vickers, the company woman in charge of the mission, has no concern for the questions at hand.

What drives the movie and the characters within it is the question of what do you do when you receive an answer? At the sight of the Engineers’ fate under mysterious circumstances, Charlie instantly gives up. He keeps hoping for something, but he sees the Engineers’ end as an end to the question. Vickers is simply relieved and hopes to go back home, her immediate question answered. Shaw, though, is invigorated. She doesn’t see the Engineers’ dead bodies as an end, but as just the next step in her journey. She’s invigorated by the search itself. Even much later, after everything has broken down, Shaw’s been through massive trauma and an improvised surgery, she’s still demanding further answers.

It’s the contrast between Shaw and Weyland that really works for me. Weyland (hidden away on the ship in his own separate cryo-tube) comes out and demands answers not for his own edification, but in an attempt to extend his own life. Shaw wants answers from the same source, but it’s more in line with a scientific inquiry. That she is the most religious of the scientists there provides an interesting juxtaposition that one might not expect. Taking the actions of the film on a moralistic vein, everyone is punished for how they approach the search for truth, but only Elizabeth Shaw is spared. Everyone else thinks the answer is the point, but only Shaw realizes the journey itself is the point.

This movie, though, isn’t a drama, it’s a horror film, and I feel that the horror ties into the central ideas rather well. The literal source of horror is the weapons the Engineers created, but the weapon seems to follow no logic, only producing destruction and aggression in its wake. I think that’s the point, though. The Engineers created a weapon they couldn’t control (with an implication that they created humanity and they couldn’t control us either) and it wiped them out. The characters’ search for answers will never get answered in the same way that the weapon will never provide an easy answer to its methods. The purpose is the aggression and unpredictability, not its final form. The audience and the characters never know what’s going to come next just like the answers to the questions are never going to come, only leading to more questions.

Visually, I think this might be Ridley Scott’s best looking film. I love the look of Alien, the recreation of ancient Rome in Gladiator, and the general gorgeousness of Exodus: Gods and Kings, but it’s the alien landscape, the green/blue color scheme, the overall gritty feel, and the huge sets that sell this movie so completely for me on a visual level. I think Scott’s one of the premiere visualists currently working, but everything gels here in one package that I just adore.

The movie overall is visceral and thematically weighty. It’s a thrilling ride into interesting questions that are designed to have no answers with a horror element that ties in with the ideas at play. I love this movie.