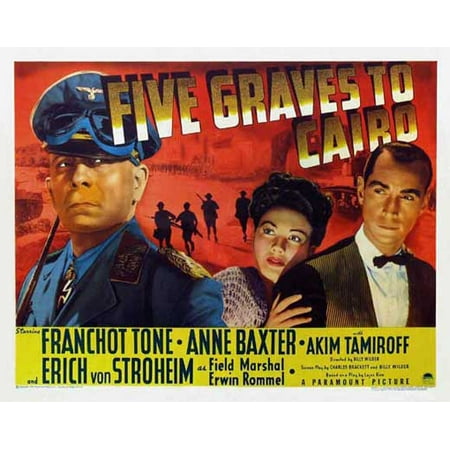 #22 in my Ranking of Billy Wilder movies.

This movie almost lost me in its second act. It seemed to be going in about four different directions at once, but the air raid and the third act began and everything snapped right back together. The almost directionlessness of that second act makes this, Billy Wilder’s sophomore effort, feel more like a freshman effort than The Major and the Minor. Though it does all come together in the end, producing an overall recommendable final product, I think this represents a slight step down for Wilder.

In the face of Rommel’s destructive moves across Egypt towards Cairo in the middle of 1942, the British are reeling and Corporal JJ Bramble barely escapes his tank alive and crawls to a remote outpost of civilization in the middle of the Egyptian desert. Little more than a single hotel next to a strip of road, JJ wanders into the Empress of Britain, the hotel, where the Egyptian owner and French maid give him water and save his life just before the German tanks roll in. JJ ends up taking on the identity of the deceased waiter of the hotel, Davos, who, he finds out in a one on one meeting with Rommel himself, was a German spy. JJ, as Davos, uses his position to gain information from Rommel, eventually learning about five caches of supplies the Germans had hidden in the desert before the outbreak of the war along the northern coast of Egypt.

It’s about there that the second act ends, and all that had been playing up to that point was beginning to swirl around a bit too far from the center. The center itself is JJ’s attempt to gain information from Rommel, but we also have an Italian general used purely for comedic relief grabbing attention, and the French maid, Mouche, working first Rommel and then his lieutenant for release of her brother from a concentration camp in Germany. There’s also a big luncheon where Rommel hosts a pair of captured British officers where he lets his pride spill most of his strategy to them. His prisoners aren’t going anywhere, so why not say whatever he wants? These officers disappear from the movie after this scene, by the way.

It’s all just getting too much, and I was beginning to get tired of the film, but then the air raid begins. The air raid itself is typical stuff. There’s a siren and everyone huddles in the basement, but it’s when a close blast knocks a bit of wall out of place, revealing the real Davos’ body and clubfoot under some rubble, that the movie picks up. We get a chase scene in the dark that ends with a great single shot lit only by a flashlight. Mouche’s vitriol she had spit at JJ about the English leaving the French behind at Dunkirk comes back as she takes the blame for the lieutenant’s death and she spits at JJ, shades from giving up his identity to the Germans. It coalesces quite well in that final big scene in front of Rommel who’s ready to depart and continue on his conquest towards Cairo.

JJ escapes, taking a copy of Rommel’s map with the locations of the caches pinpointed, and rejoins the British forces in Cairo. They use that information to counter Rommel’s attack, but not before JJ buys a parasol to match a dress Mouche owns. He’s holding onto it for when he gets back to that little hotel in the middle of nowhere, convinced that the Germans bought the evidence he left behind implicating himself in the lieutenant’s death instead of the young French girl, but he discovers that they found reason to execute her anyway. That sad ending, with JJ visiting Mouche’s grave and having nothing but a parasol to offer her before he has to jump back into his tank and drive off, is a very good note to end on.

The movie overall is definitely a piece of propaganda. There are speeches, especially from JJ, that easily identify the movie as something made in the middle of World War II. That second act really drags, but there’s enough real drama and a very good third act to bring everything back together. It’s quite solid, but not as solid as it could have been. Still, overall a good time at the movies.

1 thought on “Five Graves to Cairo”