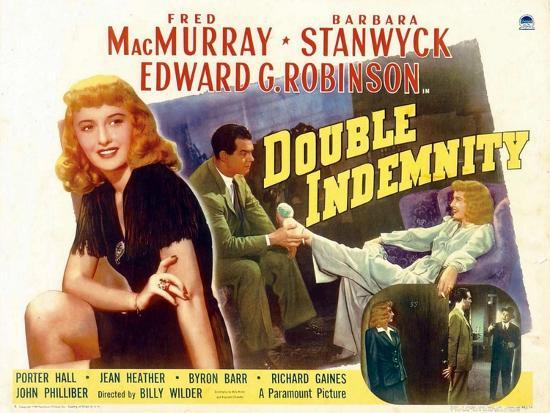 #7 in my Ranking of Billy Wilder movies.

This is such a deeply cynical film. The two main characters never seem to mean anything they ever say, especially to each other. They’re both awful, awful people who kill a man and try to take a big insurance payoff. It also forged an entire genre of film, establishing its tone, archetypes, and visual style that would be mimicked for decades. It’s such an imminently watchable film.

One of the more interesting parts of the film is the fact that the male protagonist, Walter Neff, isn’t a cop, private detective, or government agent. He’s an insurance salesman. He goes out to see to a client of his who has let his car insurance lapse (which was apparently an optional thing back in the 40s), and meets the man’s wife, Phyllis, who’s a complete sexpot. The two have an immediate attraction, but it’s thin. It’s more of a primal lust than anything approaching love, even though the very next time they meet, after having bandied about ideas of killing the husband to collect the insurance, they start professing their love for each other.

But the love isn’t backed by any actual emotion. They only begin to profess this love when the idea of working together to collect a payday from the husband’s death. The romance feels phony, but that’s the point. There’s no depth to the romance because they are using each other.

Up against the couple is the great Edward G. Robinson as Barton Keyes, the fraud investigator at the insurance company. His introductory scene, before the pair begin their plotting, shows his method through an interview with someone who had made a claim against his insurance policy. Keyes just had a bad feeling about the facts of the case, and he pursued them. He outlines what he found and he turns the claimant from an assured man to a broken one who can barely find his way out the door.

The criminal pair follow through on their plot, killing the husband but making an extra gambit to fulfill the double indemnity clause of the policy. The company will pay double if the husband dies in a certain set of circumstances, one of which is falling off of a moving train. So, they strangle him away from the train, Neff plays the husband’s part in going on the train, jumps off the back, and they leave the husband’s body behind to be found later.

Keyes is initially on their side, insisting that the death was accidental in opposition to the insurance company’s owner, but some details begin to gnaw at him and Keyes can’t let go. That suspicion is the penny on the tracks that completely derails the train that carry the murderous pair, Neff and Phyllis. Based on what comes after, though, they were going to derail anyway. The two aren’t tied together by anything emotionally genuine. It’s only their desire for the money from the murder that kept them together at all, but once the act is completed and before they ever get the money, they can’t stay as one.

Their romance was phony, so Phyllis is already moving away from Neff while Neff is prone to suspect Phyllis of turning on him. Just the mere suspicion of her having an affair with another man, her step-daughter’s boyfriend Nino, is enough to turn him against her.

This purely cynical exercise and the derailment of the train of greed is so wonderfully done. The characters are vivid and alive. Their opponent in Keyes is marvelously intelligent and knows his job well enough when to insert himself and when to let things play out. The movie is dripping with visual style, and the melodramatic score works as a great counterbalance to the faux emotion playing out on screen. It’s such a great exercise in entertainment with a twisty plot, great characters, and just plain fun. At only his third movie, Billy Wilder had made a great film and an American classic.