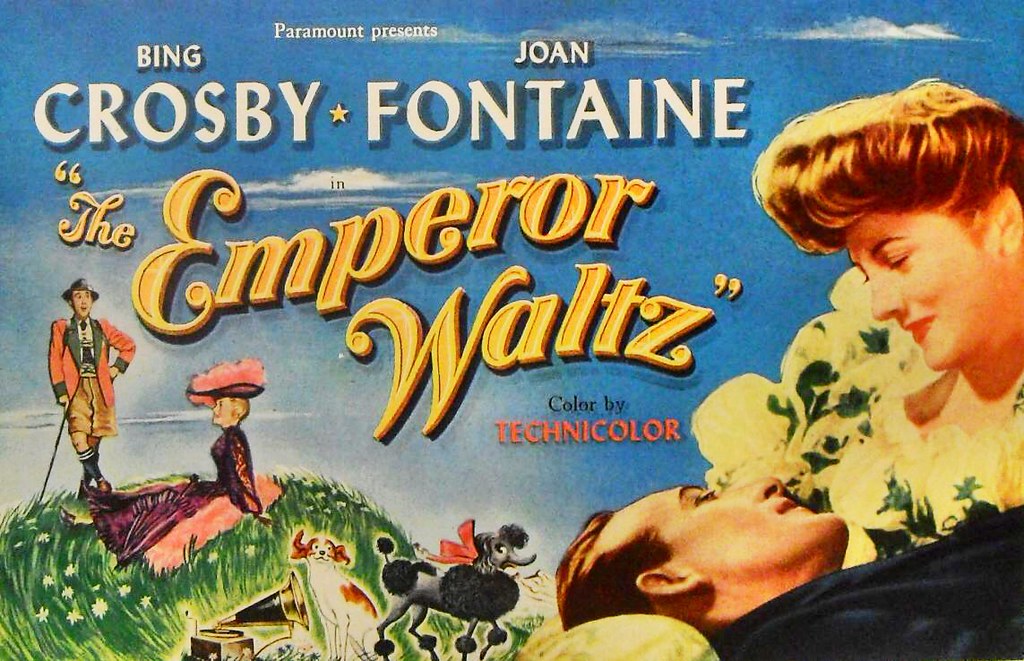 #11 in my Ranking of Billy Wilder movies.

There’s a knowing self-awareness to this movie’s song and dance numbers that turn them from sappy little ditties into more than amusing set pieces. Combined with the bright and colorful visual palatte and a pair of winning performances from Bing Crosby and Joan Fontaine, the numbers create a rather enjoyable musical from Billy Wilder.

Bing Crosby plays Virgil Smith, a traveling salesman trying to break into Vienna by convincing the Emperor Franz-Josef to buy the first phonograph in the country. His dog gets into an altercation with the dog of a countess, Joan Fontaine’s Johanna. It’s a meet cute where the humans and the dogs both seem to loathe each other. But, being a song and dance musical with one of the world’s biggest movie stars and an attractive female lead, it’s going to follow a predictable path. They’re going to hate each other, get close to each other, fall for each other, get ripped apart, and ultimately come back together again.

The movie uses that predictability to its advantage, filling the film with other touches that provide fun. The biggest running element like this is the romance between the two leads’ dogs. The countess has a black French poodle while the salesman has a white fox terrier. It plays as both a proxy and a catalyst for the romance of the two leads. The musical numbers, especially “The Kiss in Your Eyes” where the two leads fall in love, have a winking quality that also brings delight. There’s dancing, but not by the leads. Instead, the camera goes outside the hotel room where they are singing and we watch a few inconsequential characters break into dance in the hotel’s large lobby area. There seems to be an admission that musical numbers are general inconsequential in general, and the movie’s going to embrace it fully.

The actual plotting of the movie, as I said earlier, is predictable stuff. Virgil gets his meeting with the Emperor, who talks him into leaving the countess in exchange for a large order of phonographs. Virgil takes the deal in order to try and save the countess from a life of relative poverty that he knows she’ll never acclimate to. The two dogs have a trio of puppies, born at the climax of the film, and to the horror of the countess’s father. It’s the saving of these puppies, and Virgil revealing them to the Emperor, that saves both the puppies and the relationship between the two star crossed lovers.

The movie’s not challenging at all, and it kind of sticks out like a sore thumb in terms of its overall cheeriness in Wilder’s filmography. However, it’s still a light and delightful time at the movies.

1 thought on “The Emperor Waltz”