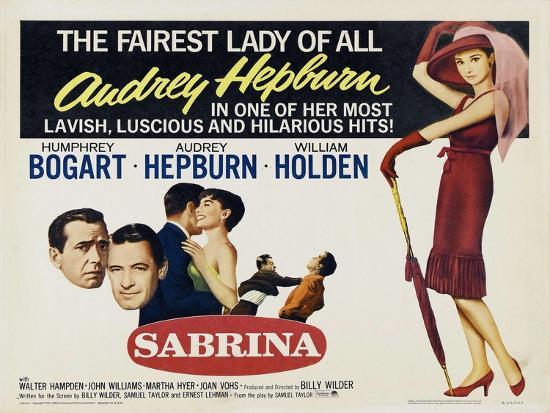 #9 in my Ranking of Billy Wilder movies.

This is pure fairytale, and it’s rather delightful. It’s a marked contrast from Wilder’s previous few films that were dripping with cynicism. There are still cynical characters, but the tone of the movie overall is so much lighter with a much greater sense of fun that it almost feels like it was made by another director.

The titular Sabrina is the daughter of an English driver to a rich American industrialist family outside of New York. There are two adult, unmarried sons to the family, Linus and David. Linus is all business while David is all pleasure, and Sabrina is head over heels in love with David. It’s a girlish crush exemplified by Sabrina’s childish manner in the early scenes, but her affections also go completely unnoticed. David walks right by her at the large party and barely acknowledges her existence before he meets up with a ditzy socialite in the indoor tennis court. There’s a great moment where, as Sabrina is writing a suicide note because of her invisibility to David, that she almost blends into the décor of her room. Her dress and the wallpaper almost match in design, creating a sense of camouflage about her that emphasizes her emotional state. It’s a subtle thing, but very effective at the same time.

Anyway, she tries to kill herself in the garage by carbon monoxide poisoning, but Linus saves her. He’s professional and courteous, the exact opposite of the easy and free David. Before we know it, though, Sabrina gets shipped to Paris where she takes a two year cooking course while never losing her affections for the younger brother back in America. When she returns, David is engaged to a wealthy sugarcane heiress at the behest of Linus, who needs her father’s sugarcane resources to help with a large business venture.

And in walks Sabrina, determined to upend everything for her own happiness, and David is all too happy to upend it for Sabrina at the same time. He’s flighty and would rather spend time with this elegant and pretty girl than the heiress being foisted upon him. Linus can’t have this, so he pretends to do two things after David accidentally squashes two crystal champagne glasses against his butt. The first is to platonically take Sabrina out and away from the convalescing David. The other is to pretend to make Sabrina fall in love and he with her so he can ship her off to Paris and ensure David’s wedding to the heiress.

Linus is a deeply cynical man who doesn’t believe in love. His treatment of David makes this very plain. He sees David and the heiress as widgets to be moved around in order to accomplish a deal, but his time with the enchantingly charming Sabrina tears that viewpoint down around him. He not only falls in love with Sabrina, he falls so hard that he ends up working to get her and David together, but David has a flighty change of character and loses all interest in Sabrina, marrying the heiress, and giving Linus an excuse to join Sabrina on the boat to France.

The movie’s light and airy and fun. It’s not the weightiest of material, but it’s so delightful from beginning to end that it’s hard to complain. If I had to, I guess I would complain about David and the ending. David just walking away from Sabrina does seem to fit his character a bit, but it also feels a bit unsupported. I think that has to do with the fact that Wilder and his co-writer Ernest Lehman were rewriting Samuel Taylor’s play so much that they didn’t even know how they were going to end the film as they made it, so they ended up with an resolution that didn’t quite get the support it needed.

Though that’s a small complaint. The movie’s such an enjoyable two hours that it seems petty to complain about something so petty.