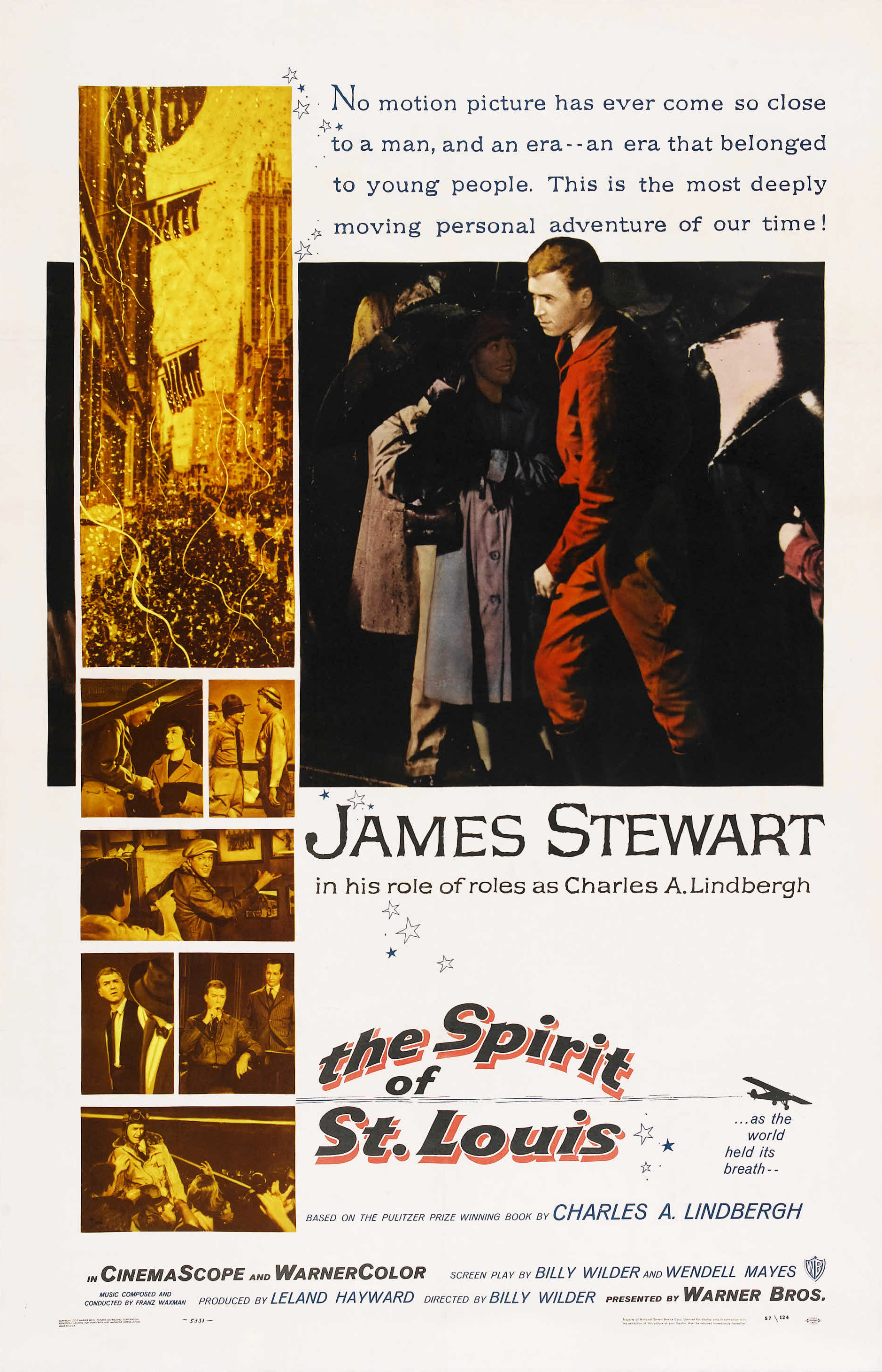 #16 in my Ranking of Billy Wilder movies.

This movie sticks out of Billy Wilder’s filmography. It’s too nice, the main character too guileless, and there seems to be a complete absence of the common motif that appears in literally every other Wilder film up to this point. It’s a fine entertainment, but it almost feels like it belongs to another filmmaker.

Using a flashback structure, Wilder tells the story of Charles Lindbergh’s solo flight from New York to Paris, starting at the night before his run when he can’t go to sleep and his voiceover takes us back to his time as an airman delivering mail across the Midwest. We see his cool-headedness mixed with recklessness as he flies into a blizzard, dumps the plain, parachutes to safety, and climbs aboard a train with the mail still in his arms. It’s here that Jimmy Stewart shows why, despite his age, he’s perfect for this version of Lindbergh. The aw-shucks charm of Stewart fits well with the honest and wide-eyed character shown in the film. As he talks to a suspender salesman in the train to Chicago, he has such a winning personality that we can’t help but have some affection for him.

As Charles gets ready for the flight, his thoughts ruminate further through the process of funding, designing, building, and testing the titular airplane. Once through, Charles gives up on sleep and gets his plane ready, despite the wet conditions with only vague promises of improvement. There are two great sequences in the film, and this is one of them. The methodical pulse of the single engine mixes with the worried looks of the onlookers and the views of the plane’s tires stuck halfway in mud and the line of trees and power lines at the end of the runway. Will Charles make it? Well, it’s obvious enough from a historical perspective, but the craft of that sequence builds suspense so well that it overcomes the obviousness.

The plane ride itself is largely uneventful, interspersed with more flashbacks to smaller moments like a flying lesson Charles gave to a priest with no feel for the controls. There’s also a curiously awful scene where Charles flies up to an army airfield to report for duty that’s so filled with sight gags and odd humor that it feels like it came out of a parody of Lindbergh’s life, not a straight adaptation.

Though, Charles largely just flies straight, he does have moments of danger. Flying into fog without knowing how long it will last or failing to notice ice developing on the wings, panicking him to the point that he begins preparations to bail into the icy cold waters of the North Atlantic in his inflatable rubber dinghy. Both are strong sequences that help buoy the long flight over the Atlantic.

The second great sequence is the landing in Paris. From what I understand, this was subject to some reshoots (that Wilder had little to nothing to do with) that enhanced Charles’ sense of disorientation and added his sudden, last second call for help to the Almighty, but it works. It’s tense and almost scary as the unclear sights below begin to dominate his view out of his small side windows.

The movie’s a fine time. It delves no deeper into Lindbergh’s character than necessary and carries the important parts of the flight with gusto. It’s also one of three films Billy Wilder released in the year 1957, which is kind of amazing on its own. It shouldn’t have been a financial bomb at its release, but you can say that about a lot of movies.

6 thoughts on “The Spirit of St Louis”