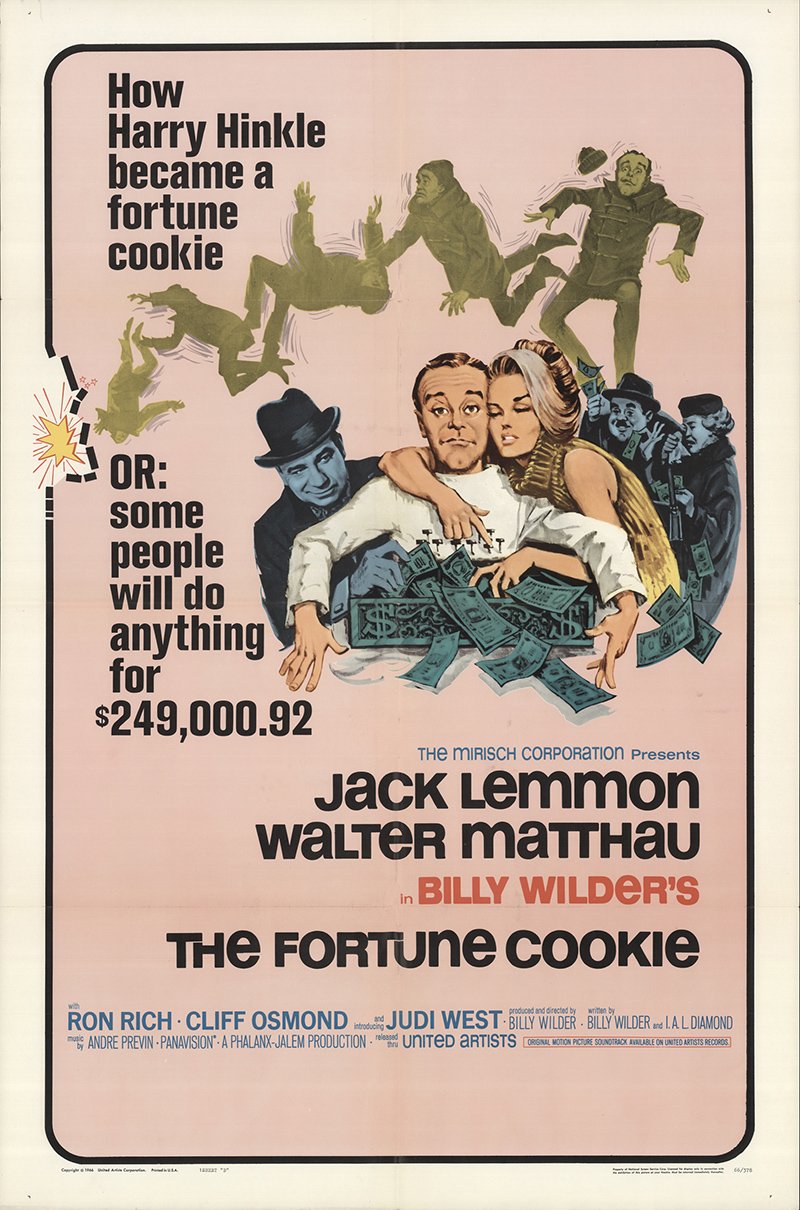 #13 in my Ranking of Billy Wilder movies.

A man without morals exploits an accident which he blows out of proportion in order to enrich himself, but enough about Ace in the Hole. In some thin way, The Fortune Cookie is the same story as Wilder’s earlier masterpiece, but it takes a very different path, actually working as a comedy instead of the straight drama. It doesn’t work as well, but it still works thanks in large part to the two central performances, the first collaboration between Jack Lemmon and Walter Matthau.

Jack Lemmon plays Henry Hinkle, a CBS cameraman who films professional football games in Cleveland from the ground level. On one play, “Boom Boom” Jackson of the Browns reaches for another few yards and knocks Henry over a rolled up tarp and sends him to the hospital. Henry’s brother-in-law, Walter Matthau’s Willie Gingrich, sees a situation he can take advantage of. He’s going to sue the insurance company for a million dollars because of Henry’s injuries, never mind that Henry isn’t actually that injured. They’re going to take advantage of a childhood injury that left Henry with a compressed vertebrae, which they will blame on the new event. Henry’s very against the idea at first until he gets a call from his ex-wife who walked out on him. He’s suddenly smitten by the idea of getting her back through this injury, so he plays along.

The insurance company hires a high priced law firm to investigate Henry’s state, hiring a private detective who sets up across the street from Henry’s apartment where they watch him saddled with his fiction because “Boom Boom” won’t leave Henry’s side. He’s broken up about the damage he thinks he did to Henry and his play on the field is suffering.

Henry’s doubts grow as the promise of his ex-wife’s return takes longer to come to fruition. He knows he feels fine, and he feels bad about trying to scam the money, no matter the source. He also feels bad because of how much “Boom Boom” is kicking himself over the injury that never happened. Gingrich spends the movie bouncing between Henry, the lawyers, and the private investigators, trying to keep everyone on the right path for his payout. Matthau plays Gingrich really well. He’s got that low, long voice that puts entertaining emphasis through dialogue and elevates it comedically, and he manages Gingrich’s emotional path really well, balancing between extreme confidence to near desperation as he watches his scheme come close to falling apart several times.

When Henry’s ex-wife shows up, he’s back on board again, falling head over heels in love with the woman who walked out on him for another man despite everyone (except Gingrich) telling him it’s a bad idea. Henry gets strung along for a while longer until he can’t take the guilt over “Boom Boom” after the football player goes to jail for a drunken brawl, and Henry’s wife makes it clear that she’s only back for the $20,000 she expects to get from the settlement. In glorious over-the-top fashion, Henry performs physical feats for the camera across the street, killing his side of the lawsuit completely.

The movie as a whole is quite entertaining, but I do wonder at the focus on Gingrich. Henry disappears for large chunks of the film as Gingrich (quite entertainingly) plays every side. The thing is that Matthau playing Gingrich is the comedic center of the film, but he’s not the dramatic center. That would be Lemmon’s Henry. So, there ends up feeling like a mismatch in storytelling and drama that unbalances the movie a bit for me. It’s still a good bit of fun, but because we lose sight of Henry for so long, I feel like something gets missing.

Though, saying that, Lemmon does have the best moment in the film. Strapped into his electronic and motorized wheelchair, he does a dance through his living room, spinning here and there, just barely missing walls and furniture by inches. It’s exciting in a way that sneaks up on the audience because it’s both completely unexpected, really daring physically, and completely in character.

So, yeah, another good movie from Wilder.