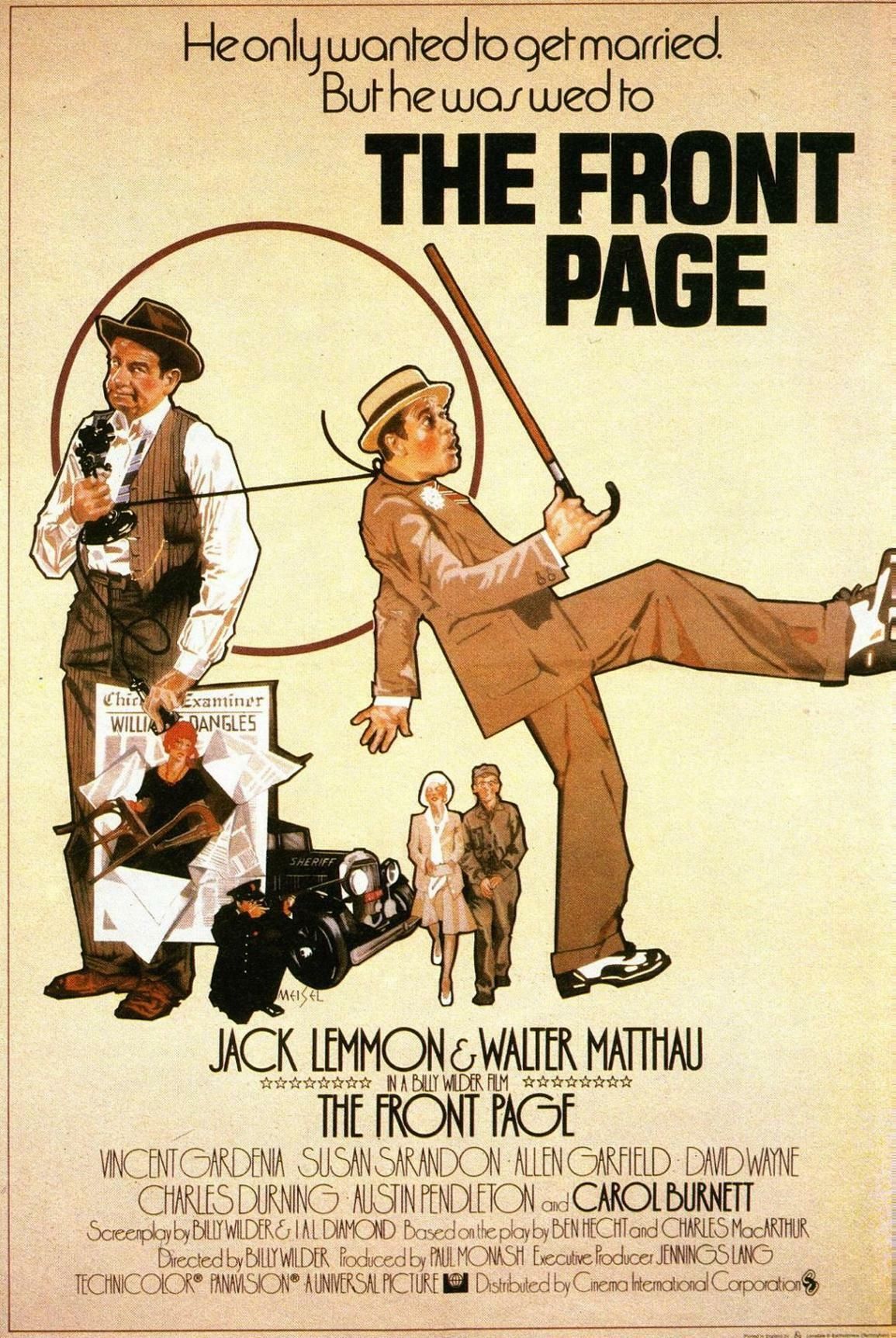 #12 in my Ranking of Billy Wilder movies.

The latest in a series of adaptations of a play from the early 20th century, The Front Page is an enjoyable and highly entertaining look at the journalistic trade. Jack Lemmon and Walter Matthau both shine in this movie, their third collaboration, and Billy Wilder keeps things clean, clear, and pretty as the story zips along.

There’s been a murder of a policeman, and the man responsible is in prison and ready for the gallows. The newspapers are all over the story. It has several great hooks. The man is a Bolshevik sympathizer, apparently. There’s a long term girlfriend, who only met him a few days before. Listen, the details of his life don’t really matter that much. What matters is that these newspapermen can spin something to increase their papers’ circulations. One of them is Hildy Johnson, who works for the Chicago Examiner under Walter Burns, his editor. The problem is that Hildy says he hates the journalistic life and is going to marry Peggy (Susan Sarandon) and move to Philadelphia to be an ad man. It’s more honest, he says.

And yet, Hildy can’t quite get away. He stops by the press room overlooking the gallows and filled with his former fellow newspapermen, just to offer them a few bottles as a going away present, and yet he finds himself calling up Burns to offer him a quick tip he picked up while there. He just cannot say no to inserting himself back into the world and he is soon writing an entire piece for the Examiner while Peggy impatiently waits in the car downstairs for Hildy to join her on the way to the train.

Complications arise when Earl Williams, the man on death row, takes the opportunity offered him by a Venetian psychologist to steal the sheriff’s gun and escape. He can’t go far and ends up in the press room where only Hildy is there to greet him. The rest of the journalists have gone to chase after a lead on Earl’s supposed location and Hildy isn’t a journalist anymore, so he’s stayed behind. But, again, his journalistic heart can’t let go. He hides Earl in the desk in the room to help Walter get an exclusive on the story.

As Hildy gets more and more into the events opening up around him, he gets more and more into the journalism, typing up the story himself with Walter over his shoulder egging him on. The girlfriend, Mollie (actually a two dollar whore, according to her, who barely knew Earl) has come to try and clear her connection with Earl while also feeling for the guy because he treated her so well. She gets in on the secret that Earl is around, and even goes to extreme lengths to try and protect him. She’s felt alone for so long that just the three days he convalesced in her apartment and never tried to touch her, only talking to her like a human being, filled her with such deep feeling that she’s willing to throw herself out of the third story window in order to cause a distraction and help Earl escape detection. The plot further develops with a last second pardon, an unscrupulous mayor up for re-election, and Hildy finally making it to the train.

The movie as a whole moves fast from one dialogue exchange to the next, from one plot twist to the next. It really relies on the actors to carry it (no surprise, since the story retains much of the shape of the play), and the actors shine forth. Lemmon is game and fun as the man who just can’t say no to the drug of choice (being a newspaperman). Matthau plays Walter with a witty and overbearingness that makes it perfectly clear why he is able to bully and trick Hildy back into work. Susan Sarandon is wide-eyed innocence personified as Hildy’s fiancé.

It’s cleanly filmed with actors expertly dispersed through the frame, which becomes increasingly important in the scenes with about a dozen characters. It’s quick, clearly told, and fun as it embraces a sense of chaos in the service of its story. It’s a very good late entry in Billy Wilder’s filmography (though I probably prefer His Girl Friday overall).