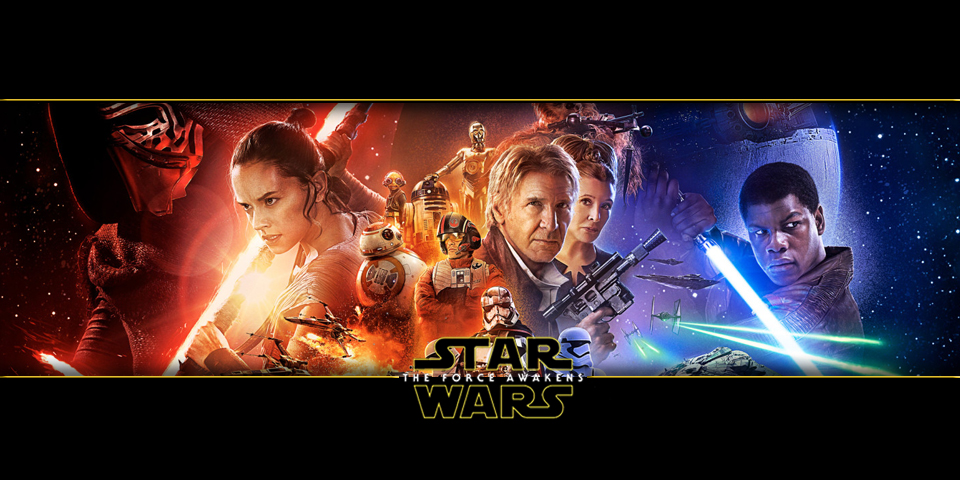 #8 in my Ranking of the Star Wars franchise.

This shares a lot of the same structural problems as Episode I, but it’s better made, more energetically assembled, and with stronger dialogue which helps make up for it. There are a lot of stories floating around in this thing which obfuscates the emotional core of the film, which does float to the surface by the end, though it’s not quite as well built as it could be.

The movie pretty much doesn’t have a main character. It’s seemingly Rey, but she doesn’t really get an outsized amount of screentime for her character motivations and actions as opposed to Finn. So, it’s really a dual journey, but they have very different motivations driving them. Finn’s is pretty clear. He wants to escape the First Order after his first taste of battle (which is really a massacre) and he’ll do anything, including freeing a captured Resistance pilot, to do it.

Rey has an interesting dichotomy at her core. She has a yearning for escape and adventure sitting in front of her makeshift home on the desert planet of Jakku, but she also refuses to leave. When given the opportunity to go, she initially takes it and then tries to go back. She’s waiting for her family. What that actually means is unclear, but she has a motive to stay. That’s interesting, however it gets lost by about the halfway point. Landing on the planet with Maz Kanata, she mentions a desire to go back home and it never comes up again. That core conflict of her character just kind of stops as she gets swept up in the adventure. Even at the end, she makes no mention of going back to Jakku, even to note how she doesn’t want it anymore, instead just acceding to go and take the final leg to Luke Skywalker’s hidden location.

Rey’s antagonist ends up being Kylo Ren, and he is the single best part of this movie. The contrast between who he wants to be and who he is, manifested physically through the mask he wears that echoes Darth Vader’s mask but serves none of the practical functions, is great. He wants to be the Dark Lord that everyone fears, but without his mask he looks like a brooding kid. He’s obviously powerful, but he also just doesn’t have the control or inspire the same level of menace without aid. His desire for more is what drives him, and it’s great.

On top of our two nominal main characters, we also have Han Solo, who’s concerned with his relationship with his son and former wife. Once he’s introduced in the film, his issues tend to overshadow those of everyone else around him because you just can’t have Han Solo in a revamped Star Wars movie and have him play a supporting role, apparently.

The split personality of the film is really magnified, though, by the fact that it has two plots and the second one doesn’t appear until about 80 minutes into the film. The first is the more interesting one. Luke Skywalker has gone missing and everyone’s looking for a map that will lead to him. It’s small, focused, and different from what we’ve had before. And then, about 45 minutes into the movie, we see Starkiller Base, a bigger Death Star, and we know what’s going to happen. Mention of attacking Starkiller Base doesn’t actually happen until about the 80 minute point when it completely takes over the film for the rest of the runtime until the very end. The Starkiller Base stuff and the end to Alien: Covenant remind me of each other. They’re both compressed versions of the original films, and they both stick out from the rest of the film.

That being said, the climax of the film, particularly the final lightsaber duel is what almost saves the film for me. Aside from being slickly produced and just simply looking great with the darkness, the bright lightsabers, and the snowy forest setting, are a great place to have your two main characters face off. And it is here that it becomes obvious that Rey is supposed to be the main character. Kylo easily dispatches Finn, and the movie long red herring is out of the way, clearing the path for the real protagonist to finally step forward. That game the movie plays up to this point frustrates the whole experience (especially considering its irrelevance), but once there we get something interesting. Kylo is trying to attract the unmolded Rey to the Dark Side, attempting to further his own ambition by adding an apprentice, something he’s pretty obviously not ready for. And, on the other side of the duel, Rey is confronted with her newfound power and actual adventure, and she has to make a choice.

Rey would be a really interesting character if she weren’t so damn good at everything she does. She can fly the Millennium Falcon better than Han Solo ever could without ever having touched its controls and with the admission that she’s not actually that good of a pilot (The Force, apparently helped her). She figures out the Jedi Mind Trick without knowing she could do it. She speaks or understands whatever language gets thrown at her (droid and Wookie, for instance). And then she bests a man trained in lightsaber combat. Now, out of all of what she does here, the only thing she does that’s important to her character is defeating Kylo Ren at the end, and that’s actually explainable because Kylo wasn’t taking the fight seriously (it’s so obvious even I can tell he’s playing with both Finn and Rey) and was opening himself up to a sudden fierce attack. Without all of the other conveniences, that sudden turn around wouldn’t feel like just another in a long line of things that this character was great at. I get the suspicion that Rey’s flight of the Falcon was originally Poe’s flight but got rewritten to her. It makes a whole lot more sense if the greatest Resistance pilot does that stuff instead of just the scavenger girl on the desert planet.

Overall though, the movie is a victim of its structure designed to hide who its main character is as well as provide a quick remake of Star Wars and the need to prominently feature Han Solo. It almost overcomes its issues, but not quite.