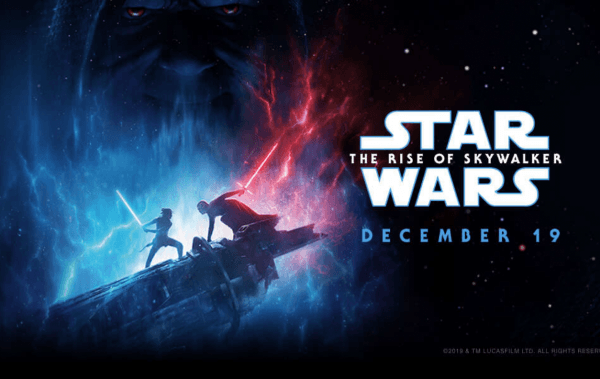 #5 in my Ranking of the Star Wars franchise.

“I think those are really valid ideas that Rian put forth, but any series of films, especially if you have three, is a conversation — which is, as I said early on when I was talking to J.J., thesis, antithesis, and synthesis. If Force Awakens asks the question of who is Rey and where did she come from, and then The Last Jedi answered it with a negative in a certain way, hopefully The Rise of Skywalker will take those two ideas and create a third thing.”

-Chris Terrio, co-screenwriter on The Rise of Skywalker

I saw that quote above randomly last week, and it’s stuck with me. I’m a vocal defender of Rian Johnson’s The Last Jedi, thinking that it’s the most thematically successful and intelligent Star Wars movie, but I also acknowledge that it doesn’t seem to be that popular. Disney obviously heard that and brought back JJ Abrams to co-write and direct the third installment of the new trilogy, hoping for him to capture the magic of The Force Awakens when everyone loved Star Wars again (except for…er…some people).

As a synthesis of the promises of The Force Awakens and the ideas of The Last Jedi, I feel like The Rise of Skywalker is actually quite successful. It’s bulky and messy with a bit too much to do with explanations of getting people from place to place, but once it calms down, in a sense, and focuses on the story at hand, things slip together rather nicely.

Continuing the basic structure of The Last Jedi, Rey and Kylo Ren are the thematic focuses of this film. Their conflict is actually a continuation of the conflict that really became defined in the previous film. He’s still dedicated to wiping out the past and replacing it with himself, hoping to use the newly exposed Emperor Palpatine to further his goals, while Rey pours over the ancient Jedi texts and trains to be a Jedi, using the lessons of the past to inform her future. The synthesis that arises is the re-introduction of the idea that Rey’s parentage means something. In The Last Jedi, Ren derided her parentage as meaningless, but here we discover that she is actually granddaughter to Palpatine. It’s not an idea I would have pursued (her being strong with the Force randomly feels like a good enough explanation for Palpatine to want her), but we’ll go with it.

Ren’s using her past to inform her future. He doesn’t care about her past, only so far as to use it to get what he wants, a future where he rules. Every interaction they have (mostly using the Force projection technique introduced in the last movie to somewhat less elegant results) is centered around this conflict, with Ren pursuing Rey, trying to possess her and her power in service of his own ends.

For about half the movie, Rey is accompanied by Finn, Poe, and Chewbacca as they go with the more laborious part of the film, the search for an ancient Sith wayfarer, a device that will take them to a hidden Sith world. They go from one planet to the next, finding an ancient Sith dagger, needing to get a code breaker to hack C-3PO so he can read it (the detail that the Republic forbade the translation of Sith in droids is neat, but quickly passed by), and then they need to find the Death Star, a special room in the Death Star where the wayfarer is hidden. Listing it out, it feels like a lot, and considering this large section of the movie’s length and relative contribution to the narrative, could have been trimmed a bit, especially when the whole C-3PO losing his memory thing gets completely reversed. That does provide nice bits of comedy here and there, but just reversing a memory wipe is anti-climactic.

Having our heroes all together for a bulk of the film allows for moments of fun interaction that we’ve been denied up to this point. The antagonism between Rey and Poe, in particular, is fun banter, but it ultimately doesn’t mean anything because the antagonism disappears the second Poe volunteers to accompany Rey on her quest. It also provides some odd moments when we have six characters all tightly squeezed into a tight space that, cinematically, feels like it would have been better to have two or three.

Still, the plot to find the wayfarer is fun and energetic, and that’s what JJ is good for. He brings a child-like enthusiasm to everything that oftentimes works (with notable exceptions), and this laborious plot doesn’t feel that laborious as it unfolds, which is definitely a mark in its favor.

I really do like so much of this movie. I was really expecting a mess, and while there is a lot going on (I’m very happy I spoiled myself early so I could take in more of the narrative than just the plot) there’s an interesting thematic core that functions as a continuation of what happened in The Last Jedi.

There’s some snippet of a review on Rotten Tomatoes that calls this a slap in the face to Rian Johnson, and I disagree completely. I think that the moment that drives that idea is when Force ghost Luke arrives and says that he was wrong for his outlook in The Last Jedi. That’s his entire arc in The Last Jedi, taking him from sullen defeatist to active participant once again.

The movie’s good. It’s big, spilling over the sides, but it’s heart is clear. It intelligently synthesizes the previous two films into a rousing and interesting conclusion. Count me as a fan.

3 thoughts on “Star Wars Episode IX: The Rise of Skywalker”