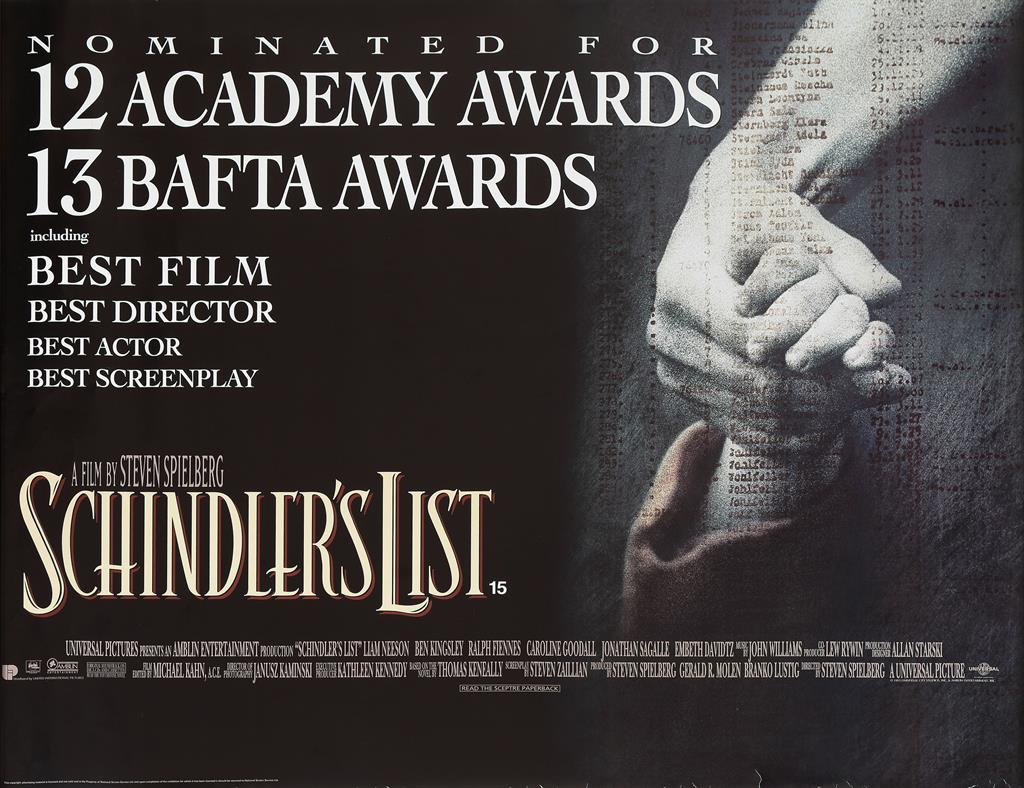 This movie is built on contrasts, and it includes one of the most devastating single cuts in movies. It’s a dual narrative that almost feels separated for a while before the two become completely intertwined in the final hour. It’s impeccably made, acted, scored, and assembled. It is one of, if not the, greatest single film by Steven Spielberg, and it’s the best example of an “important” film.

The first sustained sequence to the film is our introduction to the main character of Oskar Schindler. It’s largely wordless, showing him putting on his finest clothes, pocketing a large stack of cash, and zeroing in on some Nazi officials in a Polish nightclub. He means them no harm, he only wants to schmooze with them and gain the contact necessary to get a manufacturing contract with the Nazi military early in the Second World War. It’s an intoxicating scene as Schindler works his magic, going from an empty table to hosting a dozen officers and their dates, all to get in with the high ranking officer who reserved the best table in the place.

And then there’s a hard cut to Nazis marching through Krakow.

The music is gone, the levity is gone. We went from being seduced by the fun of hanging with Nazi officers to the cold hard reality of a Nazi occupation in a major Jewish population with one edit. It’s hard, and it’s very effective.

That contrast is at the heart of everything in the film, including Schindler’s character. Visually, we see things like Schindler in his office above the factory floor while the slave laborers remain separated from him below in much the same way that Goeth sits on the porch of his house above the labor camp. Schindler wants to use slave labors to make a fortune, which he does. Schindler and Goeth contrast really well as well. They both sit in positions of power, Schindler in the private sector and Goeth military, but they end up going in different directions. Schindler watches the liquidation of Krakow, focusing on that famous little girl in her red coat, and something clicks within him. He’s never seen the Jewish people as anything more than tools for his own personal wealth, but there’s something about that innocent little girl, weaving her way through the mass murder going on around her, that makes him reconsider his assumptions. Goeth, on the other hand, is a monster through and through (apparently toned a good bit down from reality), and, once he’s given the opportunity to exercise what Schindler calls “real power” (letting the guilty man go free), Goeth realizes it’s simply not who he is and he snipes the boy who couldn’t get the stain out of his bathtub.

Through the events of the film is the quiet figure of Itzhak Stern. When Spielberg and Ben Kingsley were discussing the character, they both boiled the man down to a single word. Spielberg chose “conscience” and Kingsley chose “witness”. Both words perfectly capture, especially together, who Stern is in this story. He’s largely our eyes into the world, playing a placid man in the face of constant threat, who does what he can to help his employer. On the other hand, he provides little nudges to Schindler to move him in the right direction, like getting Schindler to meet the one handed worker who credited him with saving his life. He’s the one Schindler ends up confiding in and plotting with to create the list of 1100 Jews to save from the Nazi ovens.

The parallel story is the story of the Holocaust as a whole. We watch the story unfold from persecution on the streets of Krakow to the ghetto to the labor camp and finally to the death camp. There are criticisms of the film that it doesn’t go far enough on this end. I think, regarding the actual story at play, the creation of the list by Oskar Schindler, it doesn’t necessarily fit, though I get the idea. We see the crackdown, liquidation, and oppression of the Jews in exact detail throughout the movie, but once we get to Auschwitz, the movie turns away. We don’t see the piles of bodies or them being cooked in the ovens, though we do see the smokestacks belching out the ashes from it. It feels like the movie could have taken another step to really embrace the truth of the horror, but Spielberg was unwilling. I don’t know…I think we might have seen enough and just the implication of the final solution was enough.

It’s a harrowing look that, perhaps, flinches in the final moments, but the central story of Schindler’s exposure and reaction to the horrors of the Holocaust are magnificently capture and presented. Liam Neeson is great as Schindler. Kingsley is quiet and great as Stern. Ralph Fiennes is pure evil as the (toned-down) Goeth. John Williams’ music is somber, touching, and distinctly Jewish by design, fitting the film perfectly. Spielberg made it because he felt like a Holocaust movie needed to be made, and he used every bit of his talent to pull it off. This is a great, great film.