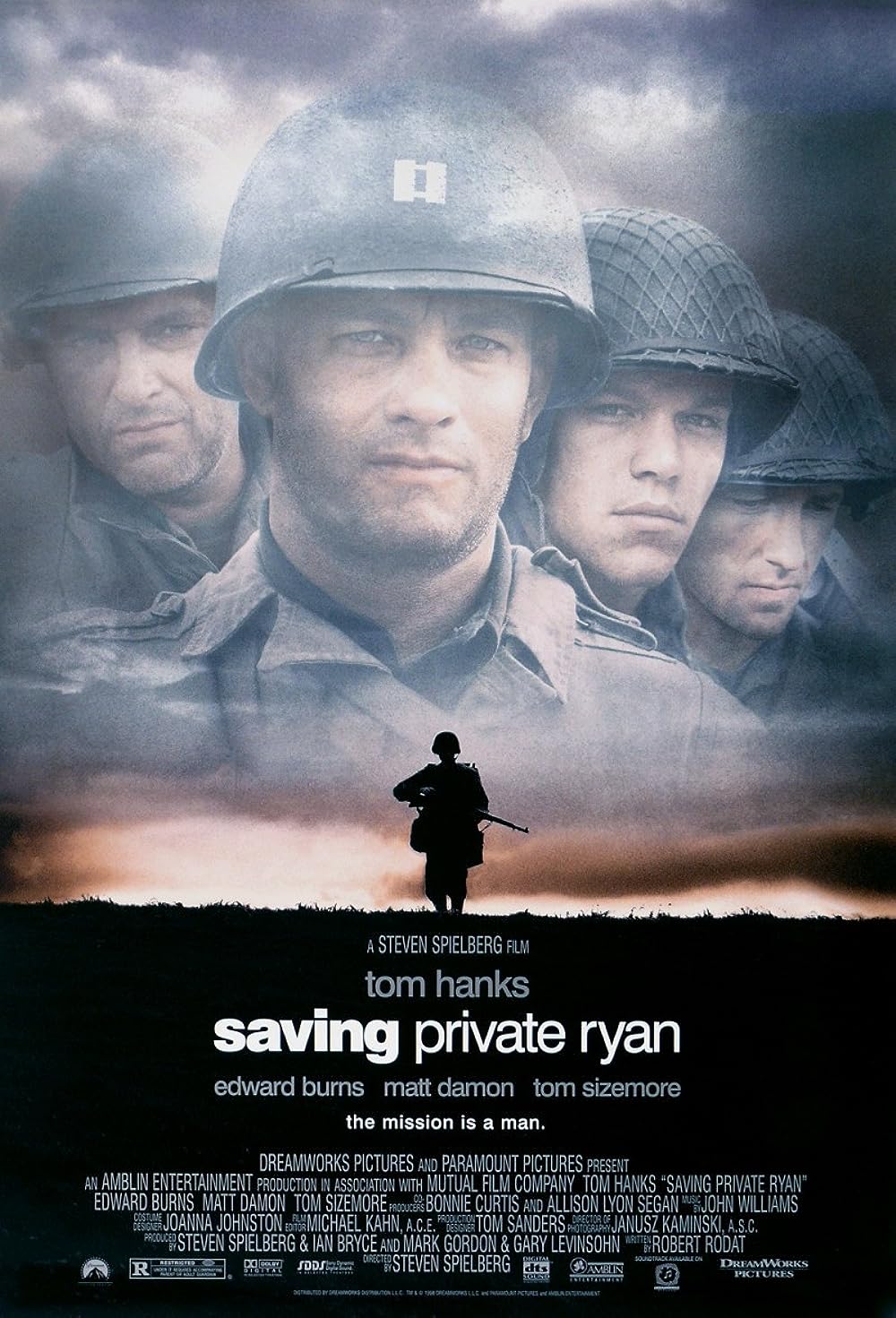 Steven Spielberg is the most effortlessly inventive technical director alive. He’s placed shots in this film that move effortlessly from one subject to another, all the while each moment provides a new piece to the story. His inventiveness isn’t showy or extraneous, but subtle and key to moving the story forward. In Saving Private Ryan, Spielberg uses his extreme technical proficiency to tell a very engaging story about the nature of war.

The opening sequence of D-Day is the obvious standout in the film. As a dramatization of the landing in Normandy, it’s terrifying in effect as it gives us perspective from the beginning of the action to its relative conclusion through Captain Miller. The physical reality of the movement from the landing craft to hiding behind the metal barriers to the beachhead up to the towers. Men get blown apart, and yet the mission has to continue. By the time a soldier deflects one bullet off his helmet miraculously and shot gets shot in the same spot again, but without his helmet, there’s a certain desensitizing influence happening to the audience, and that is reflected in how Captain Miller just shrugs off that, and other, moments of extreme violence. There’s no time to mourn the dead. There’s a mission to accomplish and a beach to take.

That effect is at the heart of the film, especially when Miller is given PR mission of marching dozens of miles into the fighting of France to find a single soldier who’s lost all three of his brothers to the fighting. He doesn’t understand why he should risk his own life and the lives of his men to save one. Their thoughts have turned inward, towards their own self-preservation, having lost sight of the war at large and the other men in uniform around them. This comes to its ironic height when Miller and his men find a downed plane and root through the dog tags of dead soldiers. It’s a game to them, and it takes the outsider of their group, Upham, to reorient them real quick with a bit of shaming.

Losing two of their number does not help Miller’s troops in believing in the mission. Why should they have lost two guys to help the one? Ryan, though, hasn’t lost sight of why he’s there, and he refuses to go back home. He doesn’t talk about the overall war, though. He talks about his fellow men and the bridge they’ve held for days. Even Miller has talked about how his primary goal in this war was to find a way to go home, and suddenly this kid he’s supposed to escort away from danger and to his mother in Iowa is refusing to take even the first step back. He knows his place, and he’s going to stay.

That dedication reinvigorates Miller and his men, refocusing them. Gone is the antagonism towards Ryan. He couldn’t help that his three brothers all died and that the military leadership wanted to help his mother over theirs by getting him home, but they can respect his insistence on staying and fighting.

On top of all that, what sets this movie apart from most men on a mission stories is two things. The first is the small character moments. In a movie that has two fantastically large action sequences (D-Day and the Battle at Ramelle), its best moments are very small. The scene in the church at night, as the men talk to each other, each dealing with the loss of one of their men in different ways, is a marvelous look into the minds of men caught in the middle of Hell (my favorite being Wade’s story about how he tried to stay awake for his mother), but there’s also Ryan’s story of home. He talks about how he can’t remember the faces of his deceased brothers and moves to talking about the last time all four were together. It’s happily nostalgic of what he’s lost that ends on a melancholy note. It’s a very nice way to really let us get to know this almost MacGuffin that we’ve heard about for nearly the whole movie.

The second thing that sets it apart is the aforementioned technical acumen of Steven Spielberg. There’s a shot late in the film that has stuck with me. It’s not a dramatic shot in any way shape or form, but the way it evolves transfixed me from the moment I noticed it. We start with the shot of an M1-Garand clip that gets locked into the rifle. The camera pulls back slightly to look at the stern face of the soldier performing the action, and then it focuses out of the building to Upham who’s running across the bridge out in front to hide in a crater. It’s a shot that lasts about 5 seconds, but it’s complex in a subtle way. It’s all about showing different parts of the preparation for the upcoming fight, showing us tiny details that add up to a whole. It’s also an almost throwaway moment that shows so much forethought and pitch perfect execution.

The movie is a technical marvel matched with great performances and an interesting story about the numbing effects of war. It’s a men on a mission story that rises above its genre to become truly affecting for the lost men. It is one of Steven Spielberg’s greatest films.