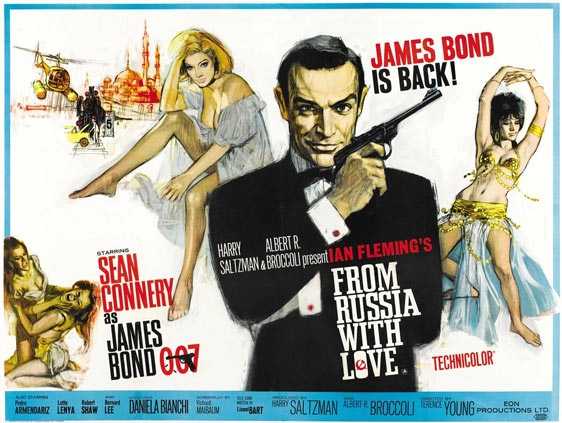 #5 in my Ranking of the James Bond Franchise.

This is a much more assured and action focused Bond adventure that gives our titular spy a very interesting villain and a Bond girl with conflict. Bond himself is thoroughly cynical through the whole affair and carries a detached air in every endeavor that makes him almost untouchable. Terence Young took all the lessons of Dr. No and learned from them, making a tighter and more exciting outing for the spy from MI6.

One of the things that makes this a more engaging adventure is that there’s no attempt at mystery. Everyone knows the setup is a setup and the question isn’t about finding out the players but taking advantage of the situation. SPECTRE wants two things, to kill Bond for killing their agent Doctor No, but they also want a Russian cryptography device called the Lektor to sell back to the Russians after they have it. In order to do this, they have a secretary in the Russian consulate in Instanbul write to British intelligence saying she wants to defect but only to be received by Bond himself.

It’s a thin ruse, and everyone knows it. SPECTRE doesn’t care that it’s thin because they know that the British will see through it and follow up on it anyway. In goes Bond to pick up the secretary in the middle of the lax part of the Cold War that is the East versus West in Istanbul. Everyone follows everyone to the knowledge of everyone, and Bond meets Kerim Bey, the station head who provides Bond his view into the peculiar world of Istanbul, including their proxies, the gypsies. The big action set piece at the gypsy camp is my only real complaint with the film. It’s well done, but it feels like an excuse to have an action scene at a gypsy camp more than anything else.

Tracking James as he meets the secretary, Tatiana, is Red Grant, a SPECTRE operative played by the great Robert Shaw. As he tracks Bond, Grant keeps Bond alive with the goal of taking the Lektor first and killing Bond second, but it’s when Grant takes the place of an MI6 contact as Bond and Tatiana try to take a train back into the West through Eastern Europe. Grant goes from a silent presence to screen giant as soon as he starts talking, fighting Bond for screentime as he plays the role of British intelligence agent. When Bond finds out that Grant isn’t who he says he is and the two turn outwardly antagonistic, the movie shifts into something special. The psychological game that erupts is taut, and then the fist fight in the train is amazing and brutal. It feels like the prim British precursor to the fight between the Bride and Elle in Kill Bill.

Up until that point, the film is a taught Bond adventure, but Robert Shaw going up against Sean Connery directly makes it something special.

Overall, the film is a quality step up from Dr. No. Introducing Q and solidifying the rest of the Bond mythos, Young created a cynical Bond and a worthy manifestation of SPECTRE to put him up against. The action is an improvement and takes much more center stage while Bond moves through the more easily told story with suave confidence.

3 thoughts on “From Russia with Love”