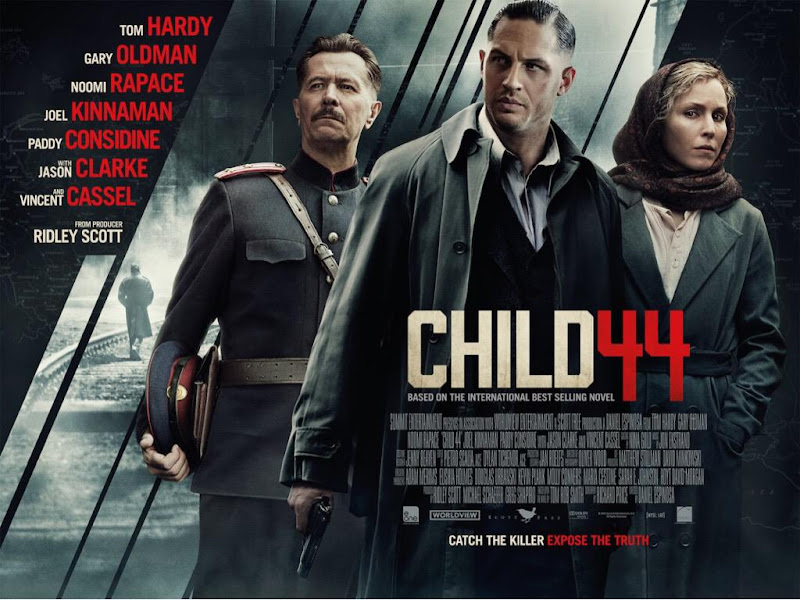 I was very unsurprised by the information that the first cut of this film was over five hours long. The final product of Child 44 is the exact right mix of overstuffed and underdeveloped that would come with shaving three hours out of a five hour movie while trying to keep as much in as possible. The big moments are still there, but so much of the connective tissue is gone.

There are really two interrelated stories at play in this film. The first is what’s on the posters and what was made into the television movie Citizen X, the story of a child murdered in the Soviet Union. Murders don’t happen in the Soviet Union. Murder, according to Stalin, is a purely capitalistic disease and murders, as gets said several times, do not happen in paradise.

This story gets sidelined for long stretches by the second story, which is a more expansive view of life in Soviet Russia as seen through the eyes of Leo Demidov, an MGB agent, and his wife Raisa. This tries to capture the horror of daily life in the Soviet police state, where every word could be reported to authorities and your entire life ended by mere suspicion. That’s dramatized early when Leo himself tracks down a veterinarian who immediately starts running when he sees MGB agents on his tail. He’s not guilty of anything, but he knows that if he gets caught then his life is over.

The movie starts both of these stories pretty well, giving us time to appreciate the slow horror of both of them, but by about the halfway point, once Leo gets demoted to the militia and sent to the country, things begin to skip and speed up. Gary Oldman is prominently featured in the marketing, but he has about a scene and a half. We skip through the investigation of further child murders to suddenly get a complete list and Leo and Raisa have to go back to Moscow for unclear reasons. There they interact with one of Raisa’s former fellow teachers who ends up being an MGB spy trying to entrap people at the school, and it gets revealing while Leo is killing the man with a phone cord. The two end up on the run, but it’s unclear why. Is it because they killed the man without anyone witnessing the murder? Is it because they got into Moscow on faked papers?

And why does Leo continue this investigation, especially after he’s been released from the police. He ends up taking Raisa around to a manufacturing plant where they track down the killer before getting into a fistfight with a former fellow MGB agent who’s tracked them down. The connective tissue between all of these scenes is gone.

Mentioning Citizen X is instructive. It strives to tell only half the story that Child 44 does, and it does it much better because it has over 100 minutes to dedicate only to that. It’s not a great film, but it’s a solid procedural from another world. Looking at the similar story of Child 44, they only dedicated about sixty minutes to the crime and investigation itself, and it’s lost in a bunch of other shortened stuff along with it.

The action of the film ends when Leo and the antagonistic MGB agent get into a fistfight in the mud. Now, a second for an aesthetic comment. When you make your film aesthetically unpleasant, you build a handicap for yourself because your film is simply unpleasant to look at. You can still make a great film, but you’re making the job harder for yourself. This may be appropriate considering the material at hand, but it doesn’t change the reality that making a movie that is ugly to look at will not help you with most audiences. Child 44 is, from beginning to end, hard to simply look at. On top of that, it’s about a child murderer and the oppressive life under Stalin. There are levels of ugly to this film that extend deep into the subtext, and it never lets up, culminating in the fistfight that ends with one man getting his head violently thrown against a rock. I’m not saying this movie is bad because it’s ugly (I think I’ve listed the reasons clearly enough), but the ugliness simply put up a barrier between artist and audience that may not have been completely necessary. As a counterpoint, I think of Tarkovsky’s Stalker, which was filmed in a Soviet state, in a region of industrial decline and nuclear radiation, but it’s gorgeous to look at despite all that.

It’s ugly, about difficult material, and it shortchanges every aspect of its storytelling because they never found a way to write a screenplay condensed enough to tell the story they wanted to tell. They filmed it all and ended up having to shorten it significantly in editing to disastrous results. Perhaps the full five hour version is a better film, but we’ll never see it because the movie ended up losing so much money that the studio will never touch it again.