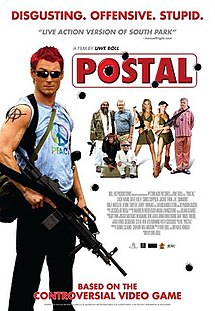 I sort of understand the reason why, but I hate myself for it. I decided to watch a handful of Uwe Boll films. Just a few that I can easily watch without effort (there are a shocking number available on Amazon Prime), but I’ve instantly regretted this decision.

Uwe Boll has said that Postal is his most important movie. From the perspective of what I think he was trying to do, I get it. It’s supposed to be a satirical look at religion, the war on terror, American consumerism, and action movies, but Boll is simply not smart enough or a good enough storyteller (or funny enough, to be honest) to pull off this trick. There’s no wit to the comedy. The extent of the satire is to give offense, but it’s outrageousness is really just boorishness, especially the stuff that’s actually aimed at the satirical targets.

On top of the comical deficiencies in the film, it’s also a complete hodgepodge of storytelling. Nominally, it’s about Dude whose life is completely miserable with an unattractive wife who verbally abuses him, the inability to get a job because of a criminal record, and general mistreatment by everyone around him. He visits his uncle who is the leader of a local cult who needs to use Dude to steal some toys to sell on eBay to pay for his unpaid IRS bill. They break into Germany Land (where Uwe Boll has a cameo and says the one funny thing in the movie about how his movies are funded by Nazi gold) where a quick and unclear heist takes place to steal the dolls. Also, Osama bin Laden is head of the Taliban (because Boll is super smart and understands geopolitics, don’t you know) and hiding in the city where they plan on stealing the dolls too because they are hiding a hundred thousand doses of bird flu to release on America.

There’s so much going on, and all through it is Boll being gleefully offensive to whatever will come his way. The dolls are scrotums (tee hee, I guess). Kids get shot (so edgy). Osama goes to a seminar about effective leadership and can’t buy the books because his assets are frozen (har har). It’s all lazy.

On top of that, because there’s barely anything recognizable as narrative structure and everything “funny” ends up so witless and unfunny, the movie drags forever. It’s 103 minutes long, and it’s one of the longest under two hour movies I’ve ever sat through. It’s just bit after unfunny bit that seems to have no end because it’s not actually building to anything. Once the movie got to Verne Troyer being raped by a thousand monkeys to fulfill the prophecy of the fake religion, well, who am I kidding? I knew I was wasting my time after five minutes, not an hour and twenty.

Oh, and George W. Bush apparently had Osama on speed dial, and Osama did W’s bidding for power, or something. So edgy.

So, yeah. I can imagine a not terribly intelligent filmmaker thinking that this is his most important film. Because he’s just not that smart and doesn’t realize how scattershot and unfocused and ineffective the satire actually is. It’s just dreary, and one of the worst times I’ve ever spent watching a movie. Now, to watch another from the great master. What am I doing to myself?