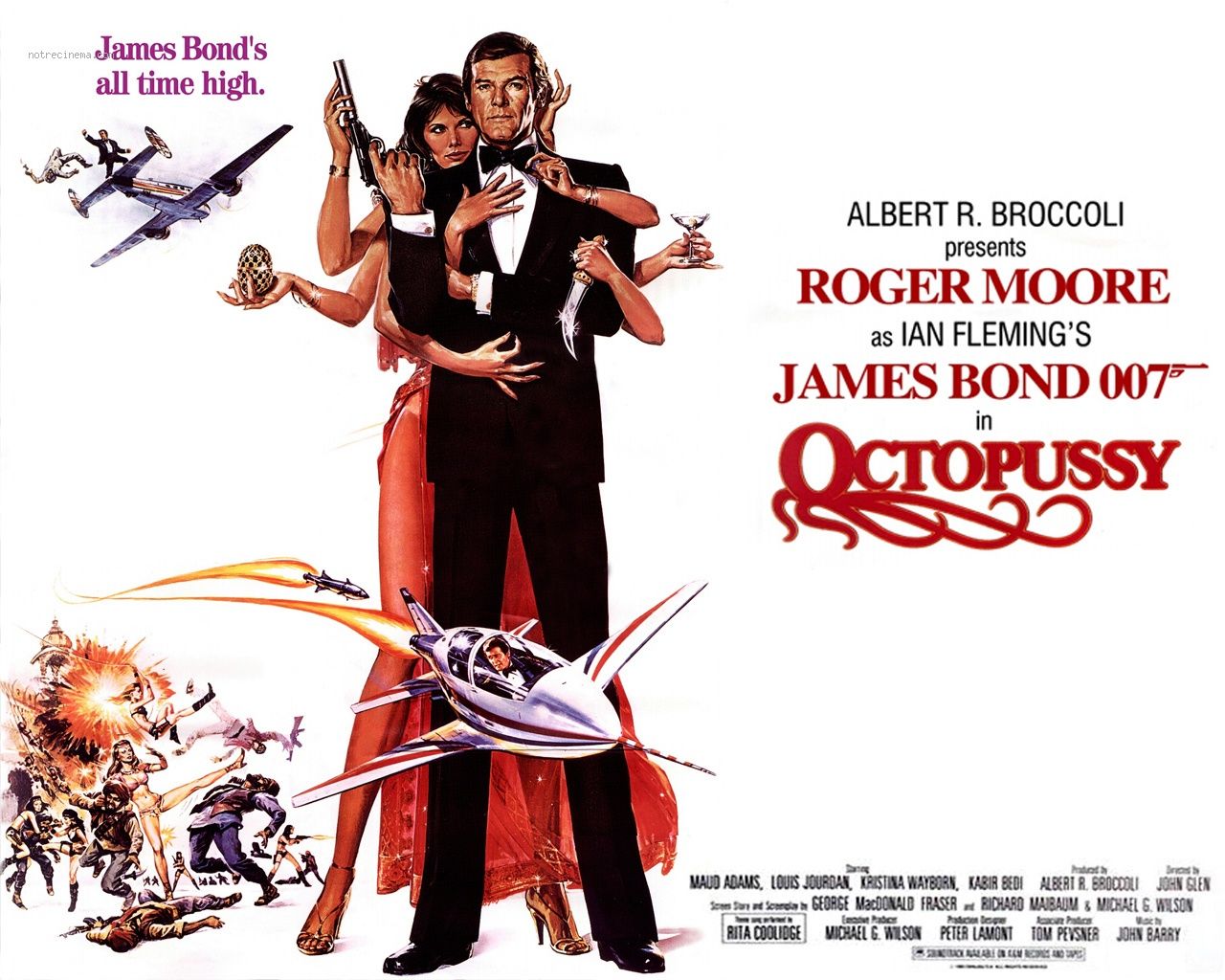 #7 in my Ranking of the James Bond Franchise.

I did not predict that I would like this the most of Roger Moore’s Bond films. It’s reputation is honestly not that good, but I was more caught up in the action and story of Octopussy than any Bond film since On Her Majesty’s Secret Service. It doesn’t go the same route as Lazenby’s picture, though. It’s more of a straight forward action mystery, but it does it with more style and clarity than any other Moore film.

This is what Diamonds are Forever wanted to be, except that this film actually gives us a good excuse for Bond to investigate diamond smuggling while also providing an interesting series of clues that add up to an actual adventure. We start with two main actions, the killing of a clown outside of a circus in Germany where he delivers a Faberge Egg to a British official in his final moments, and a crazed Soviet general outlining his plan to send a couple dozen tank divisions into the West, confident that there would be no counterattack. The general gets dismissed angrily by General Gogol, but it’s obvious that General Orlov isn’t going to stop there.

The death of 009, the clown, is the exact kind of hook that would send 007 into the field to investigate, and the investigation quickly takes him to India. The movie uses the colors and visual flavors of the country really well as Bond navigates backgammon games, chases with auto rickshaws, and even a hunt that includes elephants where Bond himself is the quarry. It’s well filmed and exciting stuff that gets Bond one step closer each time to what he thinks is the center of the mystery, an island populated by young women and the eponymous Octopussy, a slightly older woman who runs a jewelry smuggling ring whom Bond immediately beds because he’s James Bond.

The mystery continues, though, because there has to be more than just jewelry smuggling and, as Octopussy points out, jewelry smuggling isn’t the concern of the British secret service (a subtle dig at Diamonds are Forever, perhaps?). Bond keeps following the trail and finds that there is more, and it involves that Russian General Orlov. He’s used the jewelry smuggling operation by stealing precious Russian jewels and selling them in order to buy a nuclear weapon that he will detonate at an American military base in Germany. His hope is that the explosion will look like an accident and drive the West towards denuclearization, which he’ll be able to use back home as justification for a more aggressive approach towards dealing with Europe.

For a movie that’s talked about as inherently silly, that plot by Orlov is surprisingly grounded. It’s not about neutering the human race like in Moonraker or making life unlivable on land so people will move to the sea like in The Spy Who Loved Me. It’s about triggering an explosion that will create a political environment for the Soviet Union can take advantage of. It’s still about bombs, spies, and chases, but the basic evil plot feels surprisingly grounded and real. I’ve never minded the sillier aspects of Moore’s run as Bond, mostly objecting to the fact that they’re poorly constructed, but this plot feels like something Connery’s Bond would have dealt with.

The silliness is there, though. The famous Tarzan yell is a headscratcher at best. The alligator disguise isn’t really that out there, but it’s definitely weird. However, in particular with the Tarzan yell, that happens at the end of a compelling chase where Bond has to escape captivity in an Indian mansion where his host is readying a hunt on his elephant and ends up chasing Bond instead. It’s taught and exciting, and then there’s the embarrassing visual and sound, but it’s a very small part of the sequence. I don’t excuse the yell, but I do note that it’s a small part of a sequence that works really well in a movie that actually knows how to unfold a mystery. Oh, and it ends with one of the best stunt sequences in the franchise as Bond fights his way into a plane as its flying.

Maud Adams as the titular character has an easy rapport with Bond and fits in nicely with the overall plot, running a circus that Orlov uses to get the bomb into West Germany. When she strikes back out against Khan, the man who got her unwittingly involved with Orlov, she does it from a position of strength, using what skills she has to exact her revenge. Yes, the sight of a series of circus performers descending on an Indian villa and using their skills to infiltrate and fight is a bit silly, but it still works overall.

So, yeah, if the movie had held back some of its sillier elements (I guess it could have done with one less bit of Bond dressed up like a clown), I think it would have improved. There’s a tonal problem when some of these things pop up, but the rest of the movie around them is really, really good. The only Bond movie under Moore that understands how to unfold a mystery and gives us a compelling antagonist. This movie is really underappreciated and is Moore’s best outing.