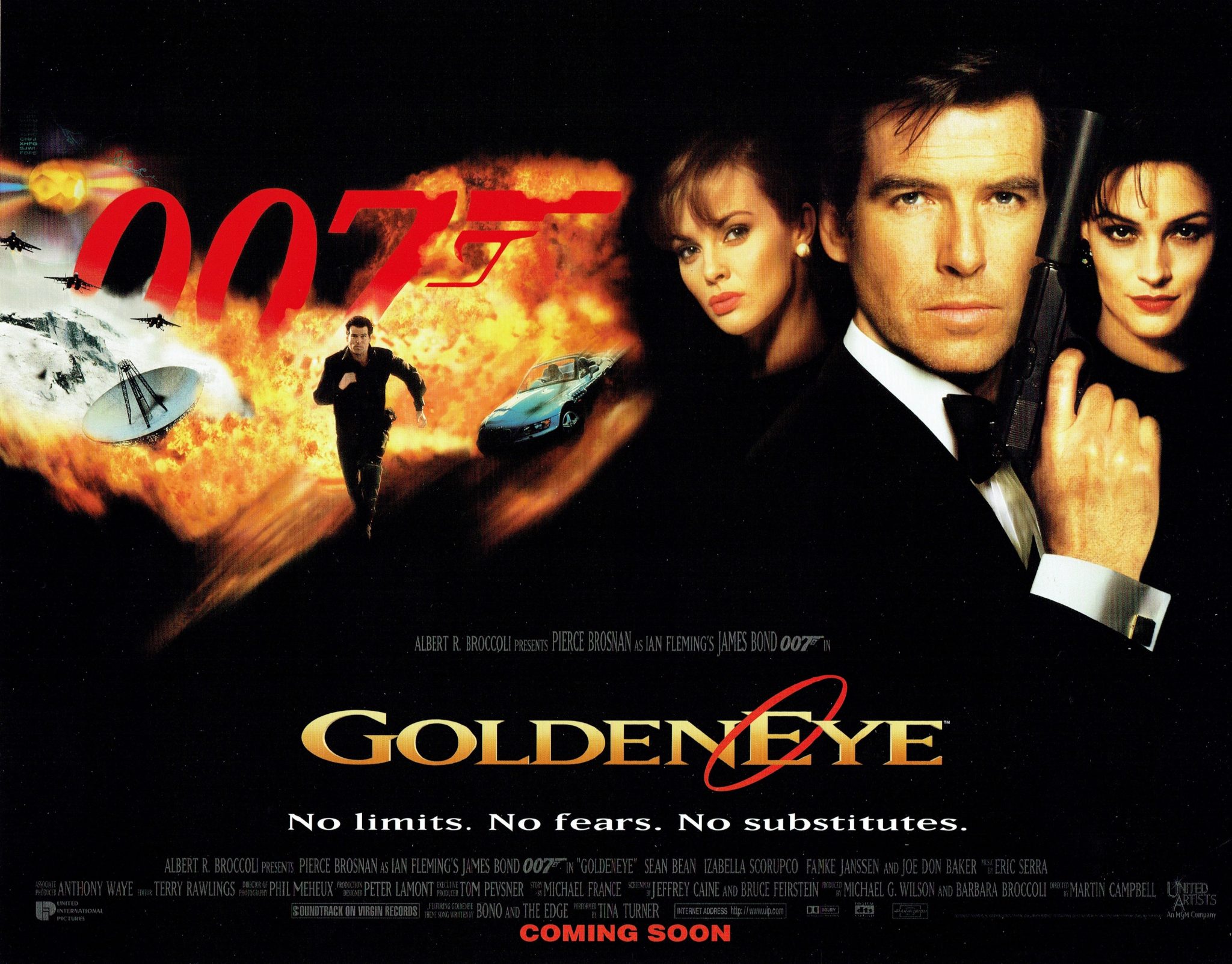 #3 in my Ranking of the James Bond Franchise.

There’s a seeming effortlessness to the action scenes here, lent from the fluid camera work and excellent choreography, that I don’t think I’ve seen from a Bond film. Yes, there have been great stunts for a long time, but the action filmmaking here feels just so much more graceful, in a way. At the same time, this is the first film that embraces a grungier aesthetic, using dirt and dust in great amount to create a great visual texture. There’s a great antagonist, and a new Bond in Pierce Brosnan who fits so easily into the role in his first outing.

I didn’t think the franchise needed a major retooling after the Dalton years. Things were actually going pretty well, but with Dalton gone and the end of the USSR there had to be some kind of changeup. What’s fun about how the movie, led by Brosnan and director Martin Campbell bring everything around Bond into the 90s, but they knowingly keep Bond exactly as he was (to a degree). The new M, played coldly well by Judi Dench, calls him a sexist, misogynistic pig, and Bond doesn’t bat an eye. He doesn’t change, he’s still going to sleep with any attractive woman that he can. The USSR is gone, but Bond still finds those who look like Soviets to fight. When he meets Jack Wade, the CIA operative in St. Petersburg, Bond demands the old Cold War way of identifying fellow operatives through code phrases. The world may have changed with a greater look at sexual politics and the “end of history”, but Bond is going to keep being Bond.

So, the movie begins with what might be the best pre-credits opening sequence in the franchise. The bungie jump down the side of the dam, the break in, the capture, the killing of Alec Trevelyan, the explosions, Bond’s tense escape followed by his exciting escape. It’s all just so exciting, cleanly filmed, and easy to understand as it unfolds. The stunts that fit in it are thrilling on their own as well.

Skipping ahead nine years, Bond is still very much Bond, having fun with women and cars. His entry into the plot of the movie is really based almost purely on the coincidence of driving along the same road as Xenia Onatopp and then happening to meet her in a casino later that night. Whether it’s through lust or simple gut instinct, he follows her just enough to figure out her underworld ties and watch her steal a prototype helicopter that can survive an EMP blast.

The movie approaches the mystery of Xenia’s and General Ourumov really well. When Xenia steals the helicopter, we barely notice the other person with her (who is not Ourumov). When the pair show up at Severnaya in Siberia, the center for testing and operation of the Goldeneye EMP weapon, and steal it, blowing up the facility in the process. What are their plans at this point? We’re not sure. In fact, we don’t even know who’s actually in charge.

We only find out later after Bond goes to St. Petersburg and gets a meeting set up with Janus, the mysterious figure behind all the actions so far, and it turns out to be Trevelyan, 006 from nine years before. There’s a bit of a data dump about the Lienz Cossacks, their treatment by the British government after World War II, and how Alec is the son of some Cossacks. I’ve read that Alec was originally supposed to be played by an older actor like Anthony Hopkins, making him a former Cossack himself. I think that would have made the character’s motives make a bit more sense and made it more immediate, but the late dump of information may actually be my problem with sorting out his motives. Outside of that, though, Trevelyan is a great villain. His plan is expansive, and intricate. He ends up using his motives as an excuse to steal all the money in the financial markets of London before blowing the country to the Stone Age with Goldeneye.

Through it all, Bond deals with two women, Xenia and her thighs of death, and Natalya Simonova, a programmer who worked on Goldeneye. Xenia reminds me of Christopher Walken’s character in A View to a Kill. They’re both thin psychopaths, but Xenia is a supporting antagonist while Walken was the main antagonist. Xenia works a lot better because of that supporting nature. The entire plot doesn’t hinge on her motives. Natalya is a modern Bond girl to a point. She challenges Bond’s violent tendencies (calling him a boy with toys), but ends up falling for him anyway. You see, Bond, the dinosaur, still gets things done in the 90s, and he doesn’t sacrifice his way of doing things in the process. A gun and a smooch is all he needs (and a few gadgets here and there).

This is the reboot Bond didn’t need, but it delivered so incredibly well. Brosnan makes his appearance as Bond in the best first outing of a Bond, ever. The action is dynamic and exciting. The mystery around the plot and villain works really well. The supporting cast is great including Alan Cumming as Boris, the computer programmer who gives Trevelyan all the technical support he needs. They work great in contrast with each other, by the way. Alec is physical and lowkey. Boris is mental and loudly boastful, and when we finally see them together in a scene, Alec shuts him down with just a look.

The film embraces the nature of Bond while providing Brosnan enough space for him to make his mark. It’s the best Bond film since Goldfinger.