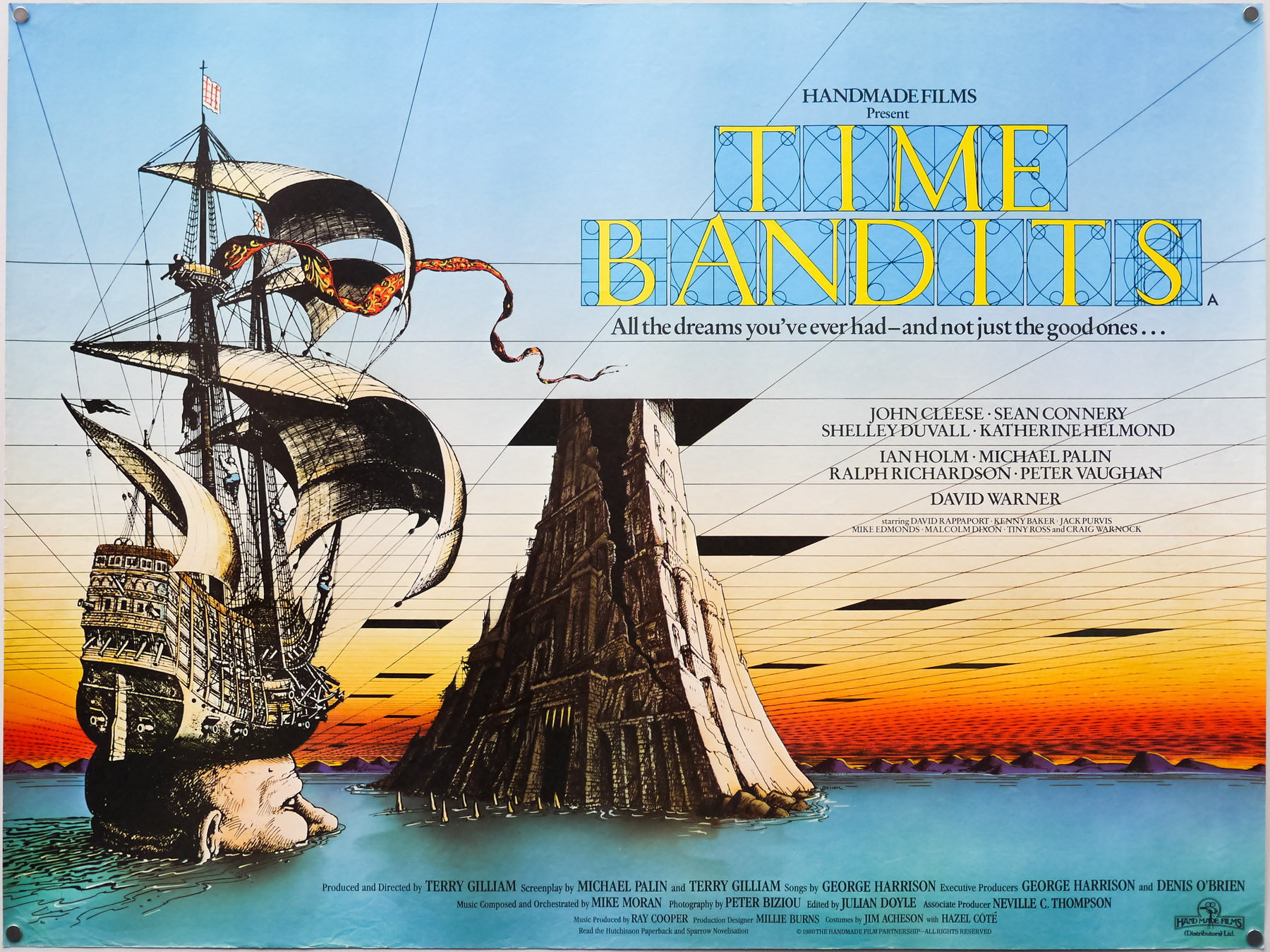 #6 in my Ranking of the Terry Gilliam films.

Terry Gilliam takes a more obvious break from Monty Python while still hiring John Cleese in a role. At least it doesn’t star him. It’s still a relatively disjointed experience, using the framework of time traveling robbers to justify looks into different times and places, letting Gilliam’s visual imagination run rampant. It’s really the justification behind most of his films, and here he finds his most solid footing yet. It could have been tighter, especially its first half hour, but it’s still a fun children’s adventure.

Gilliam’s films almost always deal with de-humanization, especially regarding the modern world. They’re almost Kubrickian in their thematic focus. It’s obvious here from the very start. Kevin and his family sit in their living room after dinner. Father and mother are mindlessly talking about kitchen appliances of their neighbors while watched a game show, but Kevin is in the background, endlessly engaged with a book on warfare in Ancient Greece. His parents seem like zombies in front of a modern piece of equipment talking about modern appliances while Kevin looks alive, engaged with a book talking about the ancient world. And therein is the movie in microcosm. Kevin yearns for an escape from the confines of his little house and little parents into the larger world, and his venue is history.

In many Gilliam films, you could ask questions about what is actually happening, whether things are reality or fantasy, and I think that often simply misses the point Gilliam is trying to make. The delineation between fantasy and reality is a surface level question that is almost incidental to the actual journey the characters are going through. Fantasy is just the prism through which Gilliam sends these characters.

In Time Bandits, it’s the time travel that represents Kevin’s escape from his humdrum modern life. That is made possible by the appearance of six dwarves (with a seventh only named for possible lawsuit reasons) who jump out of Kevin’s wardrobe (an obvious link to The Lion, the Witch, and the Wardrobe) with a map of the universe that pinpoints all of the holes in creation. They are on the run from the Supreme Being, having stolen the map from him, and before Kevin knows what’s going on, his desire for escape is being thrust upon him as the dwarves push his bedroom wall outward into an endless hallway, chased by the Supreme Being in white spectral form. Suddenly, Kevin is in Austria several hundred years prior as Napoleon sacks Castiglione.

It’s here that the movie kind of gets lost a bit. The plots of the individual journeys into time feel like self-contained adventures rather than part of Kevin’s overall arc, especially the first one with Napoleon. As entertaining Ian Holm is as Napoleon, obsessed with his height and loving the sight of little things hitting each other, Kevin gets lost in the hustle and bustle. It’s about Napoleon and the dwarves’ theft of his treasure so much that Kevin barely says anything. When they escape to the Middle Ages and meet an amusingly out of place Robin Hood, Kevin begins to reassert himself a bit, trying to leave the gang and join Robin Hood. It’s also here where we are introduced to the antagonist of the film: Evil.

David Warner as Evil might be my favorite part of the film. He enjoys his role so fully as the source of ultimate darkness, scheming his way out of his fortress by trying to steal the map that the dwarves themselves had stolen. He’s dismissive, cool, and arrogant, all while wearing an intricate costume of skeletal parts and a flowing red cape.

Kevin finally really gets his own story going when he separates from the gang and ends up in Ancient Greece with Agamemnon as his adopted father. Kevin has found a father figure who will treat him seriously, parent him well, all while Kevin is surrounded by the ancient world that captured his imagination in his books at home, but the gang finds him again and steels him away to the Titanic.

It’s on the Titanic that Randal, the head of the gang, informs Kevin of the most fabulous object in the world, hidden in the Time of Legends. Kevin is immediately dismissive of this idea. He’s not concerned with things like his parents or like Randal and the gang, he was happy in the poverty of Ancient Greece with a father figure who seemed to actually love him. The Time of Legends brings us more typical Gilliam detours with an Ogre and his wife (which, again, are quite entertaining), but they are detours.

When Kevin and the gang get to the Fortress of Ultimate Darkness, we see Randal consumed by the greed for this unnamed fabulous object and the theft of the map in return. The finale is a big event where the gang goes through time holes to find support from different eras that all come and get ultimately destroyed by Evil, only for a nearly literal deus ex machina to appear in the form of the Supreme Being.

So, the movie’s ruthlessly paced with an over-eagerness to entertain, but it’s not that settled into its own story to keep engagement quite as well as it could. My problems really are about the journey to Castiglione and the entrance to the Time of Legends as well as the sudden and unearned end to the conflict. The actual end of the movie, though, is another matter. I love that ending.

After Kevin’s adventure that may or may not have happened (it happened), his parents touch a piece of concentrated evil and explode, leaving Kevin alone in the world. He wanted escape from his humdrum life, he got a taste of it, and now he has it in full. His parents and all their materialism are gone. He now no longer has any excuse to do anything other than find his own way in the world. It’s a shocking but ultimately hopeful ending. He’s freed from the things that tied him down and can go on his own.

It’s messy just like Gilliam’s imagination, but it’s also infectious and fun. There’s a wide-eyed optimism that mixes well with a steely-eyed cynicism, all told in the form of a children’s story that challenges its audience and treats them intelligently.