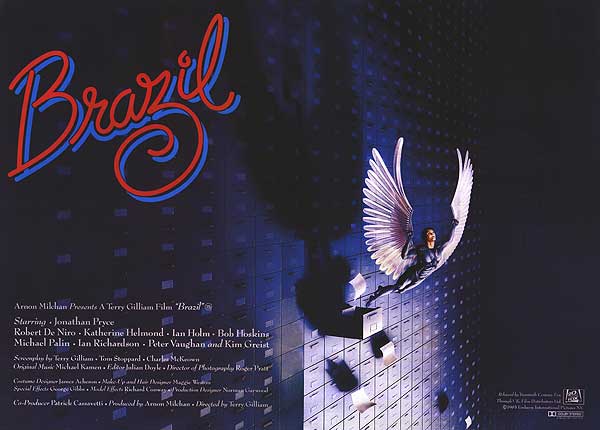 #1 in my Ranking of the Terry Gilliam films.

Here, Terry Gilliam found the best outlet for his rambling imagination in Brazil. All it took was including the daydreams of a dreamer in an outrageous future dystopia. This is really the perfect marriage of material and artist, combining the strengths of the artists with the needs of the narrative into a sprawling visionary package that works incredibly well.

This is really an extension of the theme that Gilliam broached in Time Bandits. Instead of a small child yearning for escape from his small minded parents, we have a middle-aged man trapped in his little job in the middle of a massive bureaucracy that dominates a dystopia akin to 1984 but with more ducts. Sam Lowry finds the satisfaction in his life by having no real responsibilities and dreaming of flying over a green pastoral scene unseen in the hellish urban landscape he calls home. He hardly pays attention to the news, the people, or the explosions that go off around him. All that matters to him is his small little life.

Things begin to go wrong for him when both reality and his fantasies begin to coalesce around him. His air conditioning unit in his apartment goes haywire, and he’s saved by Harry Tuttle. Tuttle, you see, is wanted by the state for nefarious activities which include not following the rules on how to fix air conditioning units. He got tired of all the paperwork, so he went out on his own, fixing people’s air conditioning problems under his own prevue. That’s why they sent out the arrest orders at the start of the film that accidentally got changed to Buttle because of a bug in the system (literally) and led to the arrest of an innocent man. Two major things happen in response to these related events. The first is that Sam goes on a mission to work through the bureaucracy and deliver a check that overcharged Buttle for his interrogation to Buttle’s wife. Nothing about it works out, of course. The other is that Central Services, the part of the bureaucracy that deals with air conditioning, shows up to Sam’s apartment to fix the issue where they find that Tuttle has been at work. Having the power of the bureaucracy at their fingertips, they use arcane rules to make Sam’s life a living hell, taking over his apartment completely.

Through all of this is Jill, the real life manifestation of the woman in Sam’s dreams. The woman in his dreams is ethereal with long hair, dressed in a flowing white robe, and flying through the air. Jill in reality has short hair, is kind of dirty with a mysterious bandage on one hand, dresses like a man, and has no interest in Sam. In the world that seems to be spinning out of control around him, Sam latches onto Jill, using his tools as a small cog in the bureaucracy to find her, even going so far as to take a promotion into the far more prestigious Information Retrieval department to get a higher security clearance to keep up his search.

When Sam finally meets Jill, he simply won’t let the difference between the reality before him and his dreams impede him. He insists on latching onto her as his escape from the awful reality of everyday life. It helps that she is part of the investigation that popped up around Buttle, not Tuttle. She witnessed Buttle’s wrongful arrest and had started going around trying to get answers from the bureaucracy, and those kinds of questions aren’t treated well by the state. Sam ends up protecting her and, by extension, helping her fall for him.

Just recounting the events of the film doesn’t really capture the intelligence and joyful execution. Jonathon Pryce is great as Sam, a man so completely unprepared for the fight that he gets himself into. The supporting cast around him including Ian Holm, Katherine Helmond, Robert de Niro, and Michael Palin. The visual design of everything is top-notch. It’s part of the tradition that uses old technology in new ways to create something alien and futuristic. The fantasy sequences themselves are wonderfully designed as well. The final large section of the film that descends into surrealistic madness.

The movie is ultimately about escape, much like Time Bandits, but it ends really differently. In the former movie, Kevin is thrust out into the greater world, having been trapped in a small place. In Brazil, the larger world is itself a prison, so the only place to really escape is inward, and that’s exactly what Sam ends up doing. His dreams and fantasies become his reality, the kind of place where love can conquer all, but in the real world outside his induced madness, that sort of victory is impossible. It’s a far more depressing view at the theme that Gilliam previously explored, but it’s explored wonderfully well and leaves the audience with much to consider.

I really do think that Brazil is Gilliam at his height. It’s the greatest combination of his visual aesthetic and a script he ever worked on. It’s well acted, well photographed, and done on a huge canvas that can capture the breadth of his imagination.