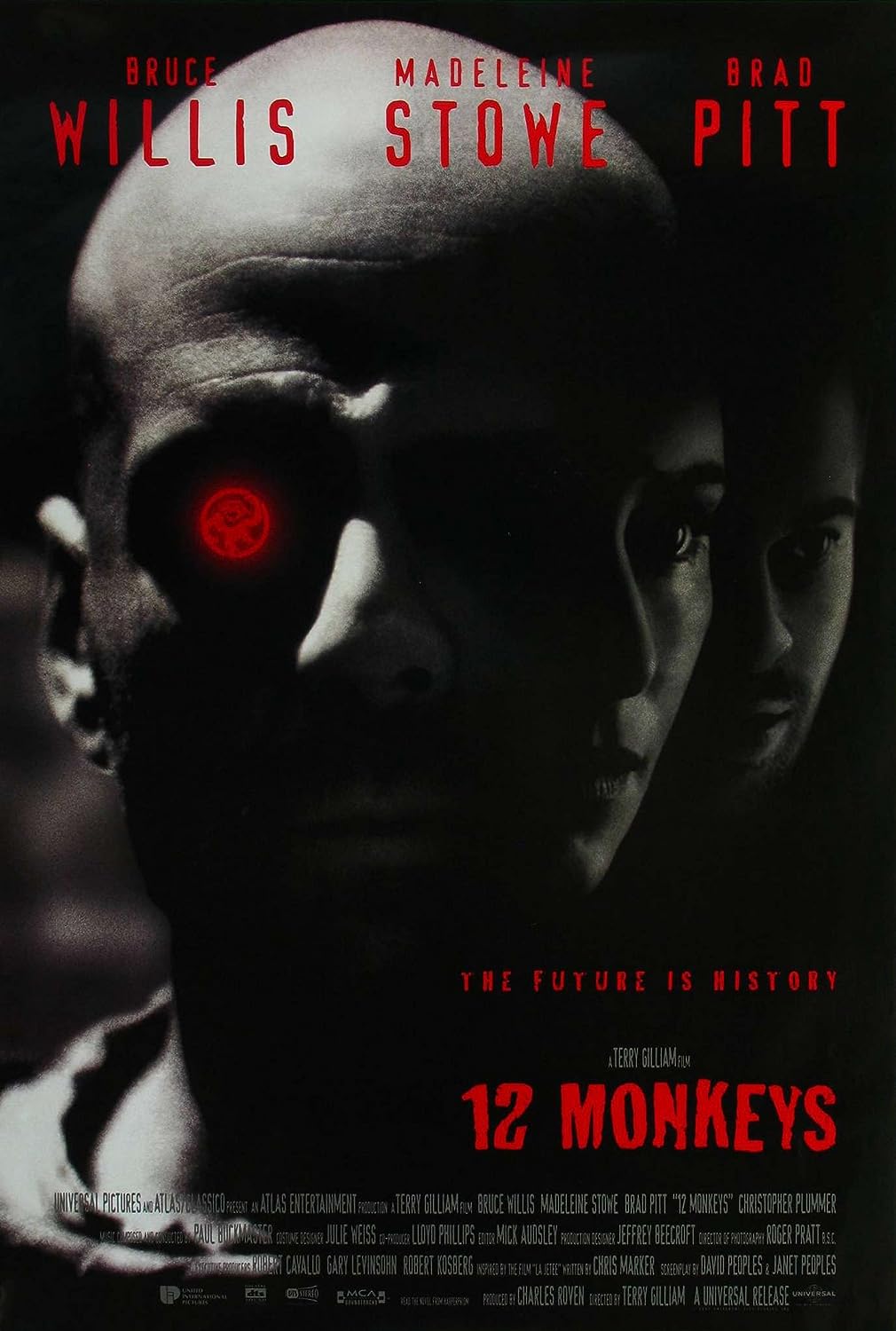 #4 in my Ranking of the Terry Gilliam films.

Watching all of a film director’s movies in a row provides a certain clarity around theme, especially regarding a director like Terry Gilliam who’s movies always revolve around very similar themes, mostly dealing with the intersection of fantasy and reality. It’s evolved from the hopeless disconnect of perpetual optimism of Denis in Jabberwocky to the fantastical escapes by Kevin, Sam, and the Baron in Time Bandits, Brazil, and The Adventures of Baron Munchausen to the broaching of mental illness and grief for both Parry and Jack in The Fisher King. Twelve Monkeys uses the ideas of time travel and mental illness to ask a lot of the similar questions Gilliam had been asking for over a decade. Namely, he was asking about where the line between fantasy and reality should be, whether we should cast off imaginative thought in our day to day lives.

The movie is intentionally muddy about what is real and what is not, giving equal cinematic treatment to things in the past and the present (or present and the future, from the audience’s point of view). Gilliam loves his Dutch angles and the exaggerated focus inherent in wide angle lenses in closeup on a characters’ face, and it’s always meant to imply a skewed reality. In that way, he films both everything in the future and everything in the psych wards using the same methods, saving the more traditional straight on framing for smaller scenes where Cole, the main character, feels some sense of calm, like when he’s driving with his psychologist and listening to music. This sense of disorientation lends itself to the central path that Cole follows where he questions the nature of his reality.

So, the reality that he starts in is a future where humanity has all been wiped out from a virus, relegated to a meager existence underground ruled by a scientist collective that’s solely occupied with finding a cure. They have developed time travel technology and send back undesirables to gather information about the origin of the pandemic. The science is imprecise, so people get thrown about into all sorts of times like the middle ages, World War I, and 1990 when the target is 1996, a few months before the start of the outbreak in 1997. They know that the epidemic started in Philadelphia and focus on a terrorist faction called the Twelve Monkeys that plastered the city with graffiti about how they “did it”.

Cole first gets sent to 1990 where he’s immediately picked up and placed in a mental institution. He’s an unstable person to begin with, but time travel and his talk about the present being the past just tells the authorities that he’s a loony and deserves to be there. Again, this section of the film is filmed in the same exaggerated style as the stuff from the future, implying that we should treat both of them with same level of fantastical skepticism. And therein lies the literal mystery of the story: Is the future we see a construct of Cole’s mind or is the past he’s trapped in equally real?

There’s a small moment that I think helps illuminate this. When Cole first appears in the mental hospital, he’s cornered by a man, dressed in a suit, who talks about mental divergence and how he’s actually on another planet at the same time getting ready to quell the barbarian hordes on Pluto. He provides this literal possibility for Cole’s condition, and then we never see him again. Perhaps this man in the suit wasn’t mentally divergent, but actually was in two places at once.

As with any Gilliam film, that literal question isn’t the point. Also, with any Gilliam film, the madman ends up being right. At the center of Cole’s struggles with his grasp on reality is Dr. Kathryn Railly, his psychiatrist. She comes into the film as dead certain of her “religion”, as she calls it, of psychiatry’s grasp on the real vs. the unreal. However, as Cole keeps disappearing and re-appearing, even appearing in a photo from World War I, her faith in the certainty of her convictions gets shaken.

The framing device of the whole movie implies the cyclical nature of Cole’s existence. He has dreams of a memory from his childhood, from before the outbreak, where he’s in an airport and witnesses a shooting. As the movie moves along and he becomes familiar with more principles in the 90s, we start seeing more of their faces in the recurring dream. This is most evidence when we see Jeffrey Goines, a fellow mental patient and the leader of the Twelve Monkeys, in his vision only after Cole meets him. I think this raises some practical questions about the ability to change time as well as Cole’s grasp on reality, but again, they’re not really the point. The point is that this dream, this fantasy, grounds him and provides him direction, giving him purpose in the face of all the questions that assault him.

There’s a wonderful twistiness to the film that’s more than just being clever. The movie is certainly that, but at the heart of it is Cole’s journey. He’s so wracked by doubt about the basic fabric of reality around him, played wonderfully by Bruce Willis, while Kathryn Railly tries to use her view of the world to make sense of it all. The score is oddly French, probably a nod to La Jetee, the French short film that inspired the movie. Brad Pitt is a maniac as Goines. It’s Gilliam’s most polished looking film while also maintaining his very particular flair. It’s a very good movie, produced well, and with a surprisingly smooth production history, that stands as one of Gilliam’s finest works.