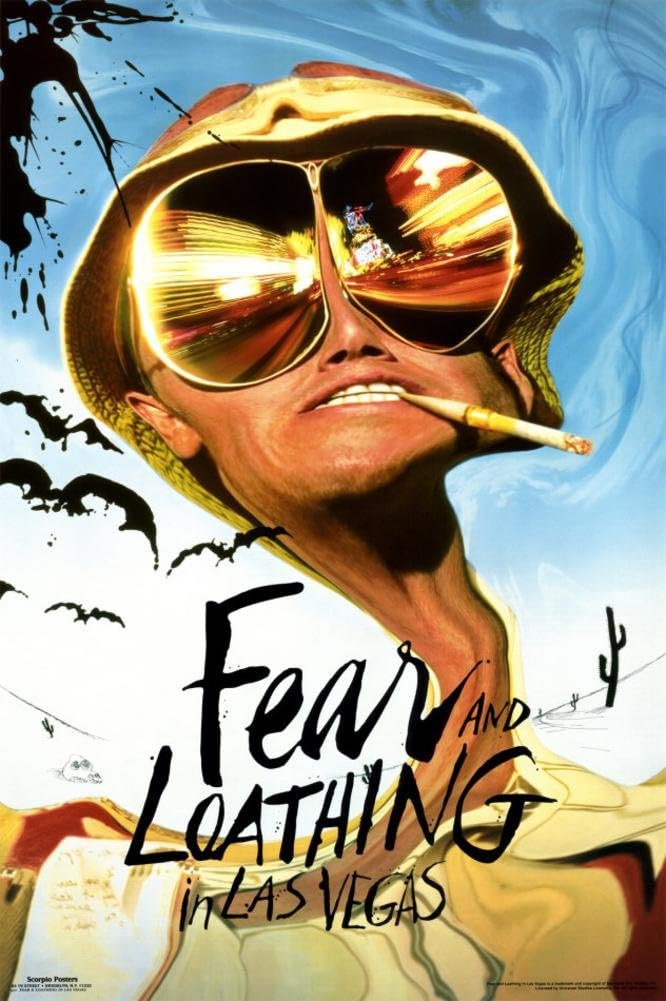 #9 in my Ranking of the Terry Gilliam films.

This movie is aggressively weird in pretty much the only way a Hunter S. Thompson adaptation by Terry Gilliam could be. All of Gilliam’s visual quirks combined with Thompson’s gonzo stream of consciousness storytelling make for at least an interesting ride. Much like Jabberwocky, I think this movie’s tangents are easier to take because I find so much of it funny. Gilliam just has a sense of humor that I get. Roger Ebert didn’t get that sense of humor, and he never quite embraced Gilliam as I feel like he should have, but hey, there’s no accounting for senses of humor.

So, Duke and his Samoan lawyer are driving through bat country from Los Angeles to Las Vegas to cover the Mint 400, a dirt bike competition, and they are traveling with a briefcase full of just all the drugs. Duke has no interest in covering the race for his magazine. Instead, he’s going to indulge in all the drugs while searching for the American dream in Las Vegas, the gaudiest single point in America.

And that, right there, is the core of the film. It’s two competing fantasies running up against each other. On the one hand is the detached amorality of Duke and the drug culture. On the other hand is the traditional America as it forms in his own mind with flashy consumerism and entitled police out to ruin his good time. It really is two fantasies that collide over the course of one long, drug filled weekend in Las Vegas.

Duke barely attends the race, wandering off after it starts, and having nothing to write about. He goes with his lawyer to a circus establishment in town and get so out of their mind stoned that Dr. Gonzo can’t get off of his stool without falling.  Dr. Gonzo flees town in a panic but appears back in LA, cool and collected enough to get Duke another beat covering the national police chief convention on the other side of town. Having destroyed a hotel room in one place only to get booked in another has a certain appeal to Duke, so he goes only to find that Dr. Gonzo has already arrived with a young naïf from Montana with a bevy of cardboard paintings of Barbara Streisand.

Duke makes another attempt to actually do his job and attends a talk by a doctor with an intricately layered theory on the labeling of and by people in drug culture, moving from cool to hip and so on. It’s as much a fantasy of how the drug culture works, based on Duke and, in particular, Dr. Gonzo’s reaction to the talk as the world that Duke choses to walk around in, soaked with ether.

The misadventures are all filmed in the same, exaggerated Gilliam way, but there are two particular scenes that stand out because they are filmed normally. The first comes as Dr. Gonzo is having a bad trip in their hotel room and Duke goes down to the casino floor to gamble a bit. He places one bet, loses, and all around him the colors have been drained and there’s little light. People look bored, and Duke simply can’t stand the scene, so he leaves. The second comes late in the film, after Duke and Gonzo have left the law enforcement convention, and they find themselves at a tiny little diner on the edge of town. It’s there, alone with the waitress, that Gonzo demonstrates his carefree drug outlook when it encounters the real world. After insulting the down and out waitress (who probably moved to Las Vegas to become a dancer and ended up waitressing at a terrible little diner), he threatens her with a knife and she goes catatonic. She’s terrified, and Gonzo doesn’t care, continuing to treat her terribly as he stuffs a five dollar bill down her shirt. Duke, on the other hand, is out of it, obsessed with his newspaper and purposefully ignoring the scene happening right before him.

I think those two scenes point to the core of the film, that the real world is dull and dangerous while the real color of the world exists in fantasy. There are dueling fantasies (in particular, the one represented by Duke and the others represented by Las Vegas itself and the cultures that Duke needs to cover journalistically), but some of them are looking for color in life while others seem determined to drag the rest of the world to the harshness of reality.

The thing about this movie is that it’s really loose. You’d expect that from an adaptation of a Hunter S. Thompson work, but feature films with little to no structure are harder to pull off. While I do find large parts of the film entertaining, there are points where I wanted the movie to simply continue past the moment that had outlived its usefulness and entertainment value. Duke arguing with Gonzo about Gonzo’s suicide attempt in a bathtub is one moment in particular. Still, the scene is funny, so I can’t complain too much.

I suppose that this is the best cinematic representation of Thompson’s work we could possibly expect. It’s borderline insane, extremely profane, and really loosely told. I have a fun time with it every time I watch it, but I always find myself drifting off here and there when I feel like I should be more engaged.

1 thought on “Fear and Loathing in Las Vegas”