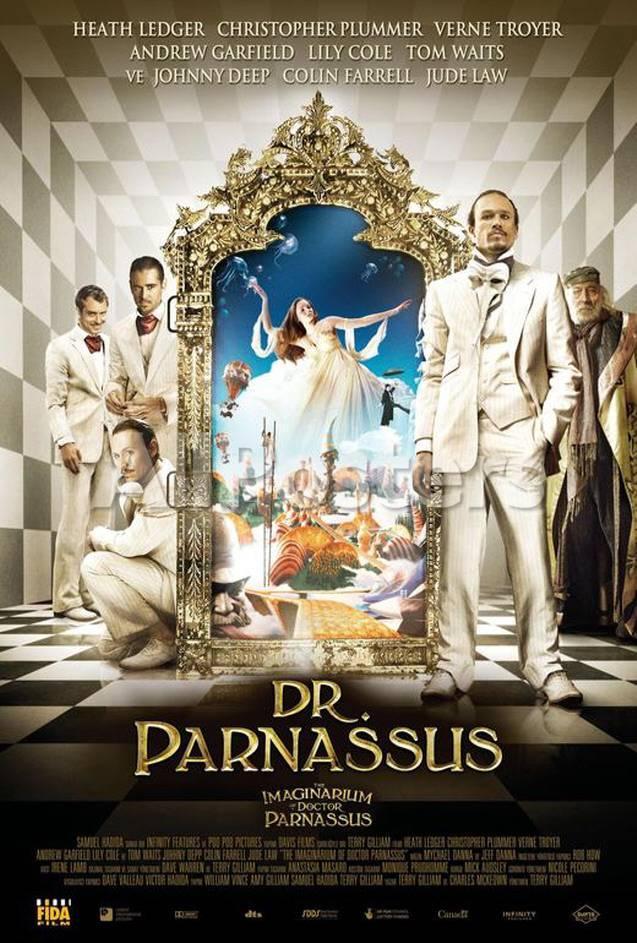 #8 in my Ranking of the Terry Gilliam films.

This movie barely holds together, but it does manage it. Gilliam called this his most Gilliamesque film since Time Bandits (I think he meant Brazil since Time Bandits was written after Brazil), and it feels it. It’s tied intimately to the themes he so loves, and it’s one of his least focused films with four main characters. Fortunately, the four characters have related enough journeys to keep the film from simply falling apart in four different directions.

The central character around which the others rotate is the titular Dr. Parnassus. He’s old, thousands of years old, and wrapped up in a series of wagers with the Devil about the collection of souls for either side. Dr. Parnassus represents the harder, ultimately more rewarding choices, and the Devil represents the easier, more destructive choices. This is demonstrated early when a young man chases Dr. Parnassus’ daughter through the doctor’s magic mirror into the fantastical realm behind it. The young man could climb up a series of 12 very tall stairs, or he could walk right into the Devil’s house of debauchery right next door. He, of course, chooses the easy path and explodes.

We learn later that Dr. Parnassus’ daughter, Valentina, is the result of one of his deals with the Devil. He was allowed to grow young to woo Valentina’s daughter on the condition that the Devil got the girl on the girl’s sixteenth birthday, which is, of course, fast approaching. She is trapped to Parnassus and his traveling circus-like life and dreams of another life, one much more normal than one might expect from a Gilliam film. She hordes a single magazine of home design and pines over it, with a man who looks a whole lot like Colin Farrell in the middle of it. The yearning for escape is very typical of a Gilliam film, but the things wanting escape from and escape towards seem backwards when thinking of Sam Lowry (Brazil), Kevin (Time Bandits), or the Brothers Grimm (Fear and Loathing in Las Vegas The Brothers Grimm), though, when considering it, it does fit with James Cole (Twelve Monkeys) and Parry (The Fisher King).

Along with Valentina is Anton, an earnest follower and fellow performer in the circus, who earnestly, but not entirely effectively, invites people into the mirror without really being able to control them. He mostly wants Valentina herself, but he’s still an ardent defender of her father. His role is never quite as clear as I think it should be. I think he’s supposed to be some sort of protégé of Parnassus’, but outside of wanting Valentina, his motives are simply not as grounded.

Into this troupe enters Tony, a slick conman who claims to have lost his memory of who he was. They find him dangling by the neck from under a bridge, supposedly left for dead. He’s still alive, thanks to a metal pipe he shoved down his throat and allowed air to pass through. Feigning amnesia, he latches onto the troupe, offering them his help with the pretty Valentina always in his sights, much to the chagrin of Anton. Anton’s awkward, and Tony is suave. It’s a competition he can’t win. And, when Tony begins getting more business to the show, Anton pushes for Tony to leave or for Valentina to leave with him.

All of this takes about the first hour, and I think it’s entertaining enough on its own right, but meandering much like a lot of Gilliam’s less focused output. The meandering undermines the narrative a bit because we’re shuffling through the different characters and it feels like they’re all pulling in different directions, because they are. I think the central problem really is Anton. I’m not really sure what he does for the narrative. He represents the future that Valentina wants but doesn’t see right in front of her, but I think he should have been pushed a bit further into the background. Maybe Anton and Percy, Dr. Parnassus’ diminutive assistant, should have been combined into a single, secondary character.

Anyway, the movie picks up in the final stretch of the wager, as a series of women (four to be precise) go into the mirror and end up siding with Dr. Parnassus, with the help of Tony who goes in with them. Now comes the time to note the death of Heath Ledger and the three actors who played him in the mirror sequences (Johnny Depp, Jude Law, and Colin Farrell). I think there was one scene outside of the mirror that they didn’t get around to shooting with Ledger. You hear him banging on a door and asking to come in, but you only see him once in an awkward shot that passes by quickly and feels like it could have been assembled from different elements. I’ve read that he did film some of the stuff inside the mirror, but it was smart to simply embrace the changing faces. It seems like they reshot the very first mirror sequence of the film to include the idea of people changing when entering the mirror after someone else (though it doesn’t seem to hold for the Russian gangsters or for Anton, so it’s not perfect). Still, it was an inventive way to finish the film that was almost done.

Out of the three, I think Law gives the best performance, but the meat is given to Farrell to close out Tony’s story in the final trip into the mirror. He’s the one who has to reveal Tony’s full backstory (about a charity, a lapsed loan with Russian gangsters, and his escape from hanging), and he’s also the one who completes the character’s arc with Valentina, bedding her in the mirror. This gives Valentina her taste of the world outside of the control of her father and leads her to becoming the fifth victim on the Devil’s side, winning him the wager.

There’s a lot to like in this film. I really like the performances in general but Andrew Garfield, Heath Ledger, and Tom Waites in particular. Even Lily Cole, the model who plays Valentina, does a fine job. I really like the embrace of cartoonish visuals inside the mirror. It allowed Gilliam to go expansive without completely blowing his budget, but it also fits the idea of a fantastical universe of the mind behind a magic mirror. Like most of Gilliam’s work where he was the chief creative force behind the script (along with his longtime collaborator Charles McKeown), there needs more connective tissue between the elements. Tom Stoppard provided that on Brazil and he got it from the scripts by different writers on The Fisher King and Twelve Monkeys. The movie needed more focus to bring the vision more shape. However, that’s not to imply that there isn’t structure or shape to the narrative. There are ideas across several characters that interrelate, it could have just been done better.

The movie’s overall a quality entertainment with really good performances, wonderful visual designs, and a couple of central conflicts that end up paying off. I just wish it was better assembled.

1 thought on “The Imaginarium of Doctor Parnassus”