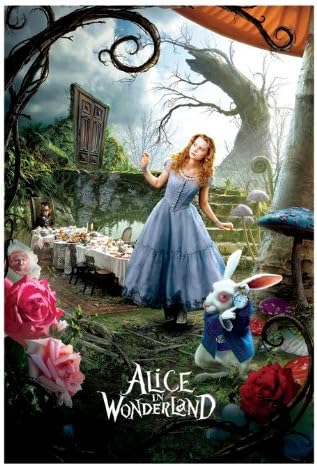 This might be the most inept and lazy epic fantasy adventure attempt I’ve ever seen. It feels like the most generic script with Alice in Wonderland iconography tacked on as an afterthought. Everything about this movie is wrong. From the visuals to the storytelling to the acting, nothing fits.

So, Alice has grown up and lost all memory of her adventures in Wonderland. She goes out to a rich estate where she is to be engaged to a boorish ginger with an awful mother. As he asks for her hand in about as public a way as possible, she runs off, chasing the white rabbit, where she falls down the rabbit hole and recreates the actions she went through on her first adventures that grow and shrink her to get through a door.

She is then met by a heavily CG’d creation of a world that she never quite feels right in, surrounded by CGI creatures that never feel quite real. Those creatures, the white rabbit, Tweedledee, and Tweedledum show her the prophecy, a roll of parchment that has all of future history on it. I despise prophecies in storytelling. They’re lazy when played straight, and they’re usually played straight. And Alice in Wonderland plays the prophecy very straight. It feels like the characters are simply looking at the script and hoping that Alice decides to play along. The reveal of the scroll undermines any real tension because we know where the story’s going and what’s going to happen.

As I rewatched this for the first time in years, I was reminded of Terry Gilliam’s Jabberwocky. Both films are essentially adaptations of Lewis Carrol’s poem, but Gilliam’s is a playful and loose take on the material while Burton’s is a weirdly strict retelling of a nonsense poem. The Bandersnatch is a real creature that Alice rides around on. The vorpal blade is a special totem that Alice must claim. The Frabjous Day is the prophesized day that the Jabberwock will be defeated. It’s all so literal and it doesn’t jive with the nonsensical nature of the source material. Also, prophesies are lazy and I hate them.

Alice moves through this dark and gritty version of Wonderland (that the locals call Underland for…reasons), seeing all the familiar sights but with darker, grittier undertones. There’s the caterpillar, the Mad Hatter, and the Cheshire Cat. She makes it to the Red Queen (with an oversized and obviously CG enhanced head that is distracting every moment she’s on screen) where she becomes a court favorite under the name Um because she shows up very large and the Queen likes large people. Now, for the little that I like this movie, I do like how the courtiers around the Queen are covered in prosthetics to make individual parts of their bodies larger. This ties in with a criticism that Alice lodged earlier about the ridiculousness of fashions (a codfish on one’s head, she imagines). It feels like the single part of the film with any thought behind it. It’s also about three minutes of the film.

Alice ends up making her way to the White Queen, the Red Queen’s sister, who’s flighty. There, it’s obvious that Alice will don the armor and take up the vorpal blade because, you know, the prophesy says so. When she makes the arduous decision that the movie told us she was going to make an hour before, there’s no sense of elation because we already knew that it was going to happen. Also, what does it say about a movie that’s supposedly about a woman becoming independent-minded that she ends up doing exactly what a piece of paper says she’ll do? She’s not acting on her own, making her own choices, she’s falling into pre-determination.

Anyway, the literalness of the storytelling extends to the final big fight that takes place on a checkered field meant to evoke a chess board. Ugh. Alice has this weird moment as she starts her fight with the Jabberwocky where she recalls six impossible things in her adventure up to that point (echoing something her father told her in the flashback that started the movie), but I’m not really sure what it’s supposed to accomplish. It comes off very weird and inappropriately delivered for the moment.

And that’s the movie. It’s weirdly CGI’d to death. Acting is one note all around. Alice’s journey of self-discovery actually inverts itself. It’s boringly predictable. And it takes itself way, way too seriously at times (like the Hatter’s recitation of “Jabberwocky”). This is easily Tim Burton’s worst film.