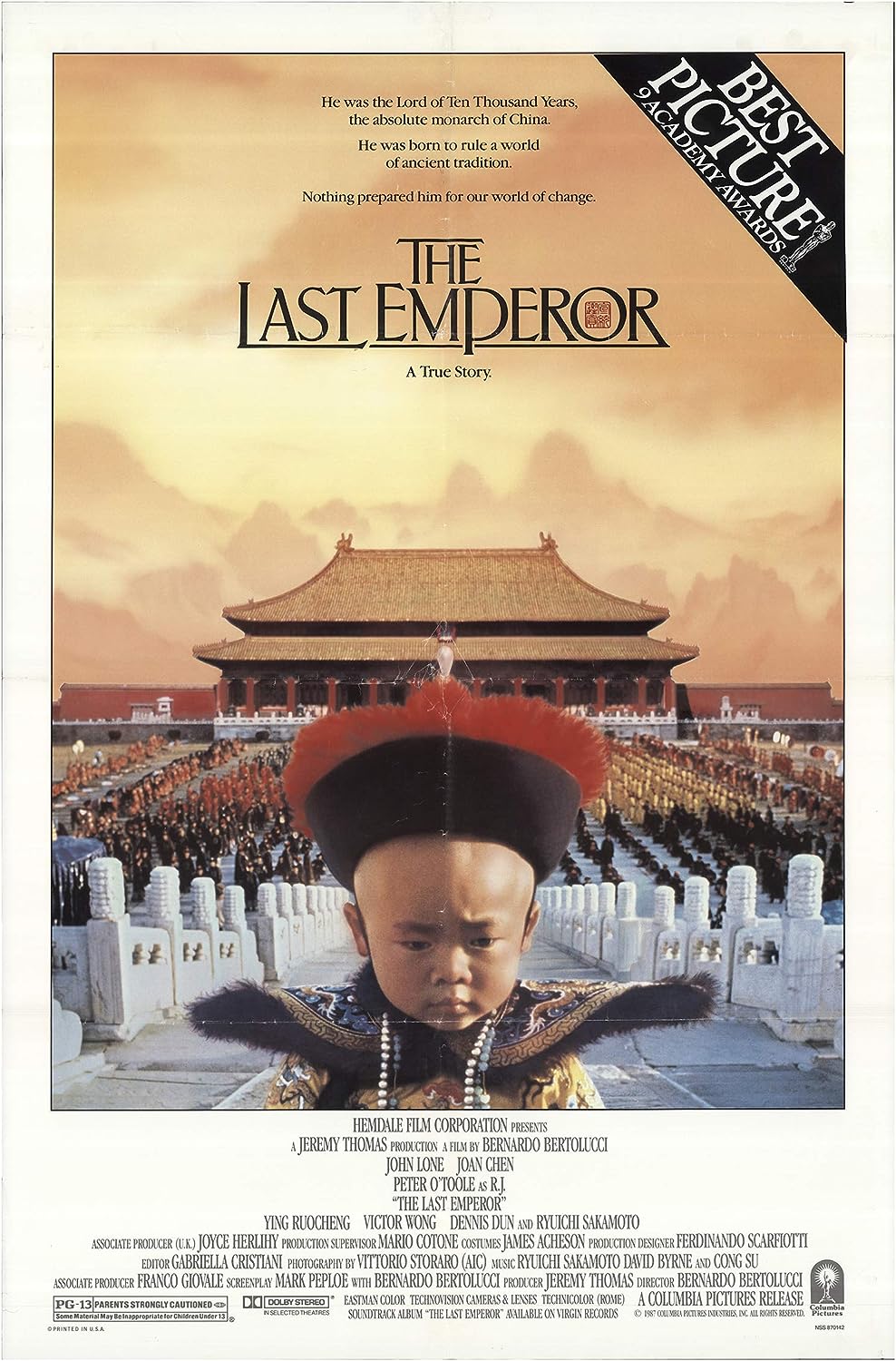 I didn’t intend to review this film when I threw it on. I bought it because it’s great, and I just wanted to watch it again, but then I read Roger Ebert’s review and I felt like he completely and totally misinterpreted the ending. And then I read the essay that came with the Criterion Blu-Ray by David Thompson that seemed completely scattershot and talked more about the rest of Bertolucci’s career rather than The Last Emperor itself. So, I just felt like I needed to get my own thoughts down.

Much of the conversation around this movie is about how China allowed Bertolucci to film in The Forbidden City. Ooo…aaaa…amazing. Okay, that’s done.

Snark aside, the movie is a visual delight, and it is in no small part because of the expansive location that is the Forbidden City that that works. This story needs to feel big because it is the story of two things that are the intimately related. The first is the eponymous last emperor Puyi, and the second is China itself. The connection makes sense without even considering the details of the story, but the way the story plays out (which I assume, like I assume with all historical movies, is roughly 90% ahistorical). Puyi’s brief childhood reign as emperor leads to time as an accepted figurehead in China, a puppet for Japan, prisoner of the Communist Chinese government, and then a modest gardener. As he progresses through this story, the country around him changes along with him.

One of the things that bugged me about Roger Ebert’s review was that he described Puyi as passive. That’s only partially true. He was never able to directly affect any major events, but he tried. He tried a lot. From his time as a boy where he climbed off of his throne to wander and founds only his supplicants to his affirmative effort to become Japan’s puppet emperor of Manchukuo throughout the Second World War, Puyi was trying to assert his will upon his household and China overall. The problem was that every time he tried, he received pushback of a proportional nature. His effort to bicycle out of the Forbidden City after his abdication is met by a closed gate, but his effort to assert China’s independence alongside Japan is met by hostility from Japan, effectively ending his faux-reign before he’s captured by the Russians (and then handed off to the Chinese).

Ebert asserted that the re-education Puyi receives is successful because he never really had an education in the world, and I think it’s one of the most wrong-headed things he ever wrote. Puyi received an intimate education about the workings of the world from his secluded spot away from things. It was a hard education, but he did receive it. The re-education he is forced in prison doesn’t actually work, but over that time Puyi learns his smallness in his own life. His reflection on his contributions to his life and the history of China are minimal at best, represented best by his inability to function without a servant for the first time in his life. It’s not that he became a good communist, it’s that he spent 10 years thinking about his life with little else to do. It’s only when he takes up gardening that he finds something he can influence. It’s small, but he can make the world better in a very small little way.

Puyi’s journey is compelling in his continual efforts to make changes in his life, but it’s brought to life visually and there’s much more to talk about than the Forbidden City when it comes to The Last Emperor’s visuals. Vittorio Storaro, the film’s cinematographer is one of the greatest of his craft, and he used color intelligently and explosively in this film. The vibrant colors of the imperial period end up mirroring the bright colors of the period in Puyi’s life where he’s out of prison in Communist China (1967), implying a connection between the two eras with Puyi’s drab, colorless prison period in between. I think he’s saying that little has actually changed in China. The children’s marching and singing in praise of Mao in the streets evokes the singing death chant of the Empress Dowager at the beginning of the film. It’s still a highly centralized society with deep inclinations towards pomp and circumstance.

The movie is sumptuous visually, compellingly acted, intimately involved in the history of the country, grand in scale, and intimate in scope. It’s a triumph of cinema and one of the best movies of the 80s.

1 thought on “The Last Emperor”