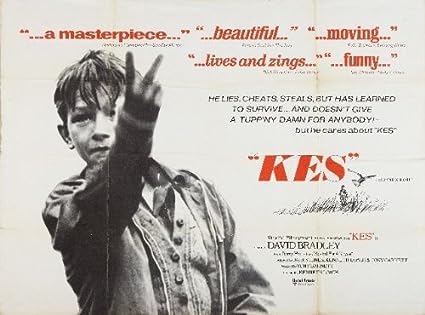 This movie is a bit rough from a technical perspective, but it doesn’t get in the way of my complete love for it. Filmed in Yorkshire with a mostly amateur cast, the movie is as rough as the surroundings and the accents of the locals. However, at the very large center of the film is David Bradley, who plays the main character Billy. The story of a young boy, trapped in the mining town in which he was born, who finds his own small escape in the midst of it all is some wonderful cinema magic.

Billy’s life in Yorkshire is dominated by two things. The first is his homelife where he’s alternatively ignored and lorded over. The other is life in the small town where he roams free outside of school and his job delivering newspapers and where he’s dominated by petty tyrants at the small shop he works from and in school. The most prominent adult figures in his life are his brother, with whom Billy shares a bed and pushes him around, his mother, who ignores him almost completely in favor of her quest for a replacement for her children’s absent father, the owner of the shop, who treats Billy poorly, the headmaster at the school, who domineers over every student, his physical education teacher, who’s stuck in a sort of adolescence, and his English teacher, the only warm voice in the whole adult world towards Billy.

Into this oppressive life, Billy introduces a kestrel. Out walking on the outskirts of town one day, he notices a small hawk flying from a dilapidated tower. The owner of the land is nearby, and Billy gets the owner’s permission to climb a hundred feet up the side of the tower to the nest and collect one of the hatchlings. He takes it home, steals a book on falconry from a local bookshop, and begins a bond with the small bird. He learns to feed it with scraps of beef and other small birds. He teaches it to jump to his hand. He teaches it to fly to him on a string out in the open. The relationship builds until he can take the bird, whom he names Kes, out to a field, without a tether, and just have it fly around chasing bits of meat Billy’s placed on a ball that he swings around him on a string.

It’s side by side with the training of Kes that Billy deals with the petty tyrants around him. The headmaster whips boys’ hands for smoking. The physical education teacher parades himself around a soccer pitch in his club uniform as he leads one team of schoolboys against the other, demanding deference and a win. When he doesn’t get it, he takes out his frustration on his goalie, Billy, whom he forces into an extended ice-cold shower. Billy’s brother, Jud, leaves him a couple of coins to put on some horses. Billy goes to the betting house, sees the odds of the horses, and decides that the money would be better spent buying him some fish and chips, a rare treat for a poor boy who gives up his income from delivering newspapers to his mother.

This ends up being a terrible mistake since one of the horses wins, which would have netted Jud sixteen pounds. Jud, infuriated at the lost income, takes his anger out on Billy’s bird, killing Billy’s one small escape from his miserable existence. It’s a crushing moment and one that gets me every time.

Billy’s journey is tragic in its cyclical nature. He ends the movie where he began it, but only worse off. At the beginning he doesn’t have a sense of what he’s missing, but at the end he knows full well what he’s burying by the field.

One of the biggest reasons that this movie works as well as it does is David Bradley as Billy. Bradley was, like everyone in the cast except the English teacher, a local of Yorkshire with little to no acting experience. The director, Ken Loach, didn’t ask him to inhabit Hamlet, but only a version of himself, and that authenticity sells perfectly in the package of the film. In particular, it’s how Bradley gets excited about Kes that propels the movie emotionally. Bradley trained the bird himself, and his knowledge and comfort with the kestrel is easily apparent. However, it’s in a scene where the bird is not present that this becomes most obvious. Billy has to explain to the class something true, a fact, and it comes out from another student that Billy has a bird. So, Billy stands up in front of the class and begins going into detail about how to raise and train a kestrel, and he’s animated in ways that we don’t see in most scenes. He’s withdrawn, appropriately, mind you, in many situations in the film, but this coming out of his shell feels really genuine. We can see the excitement in his eyes and hear it in his voice.

The movie is a marvelous triumph of independent British cinema. It’s intelligently filmed, using the setting with its rolling hills and coal mine in great contradistinctive ways. The acting is naturalistic and feels perfectly in place. Through it all is a clear emotional story that resonates. I love this film.