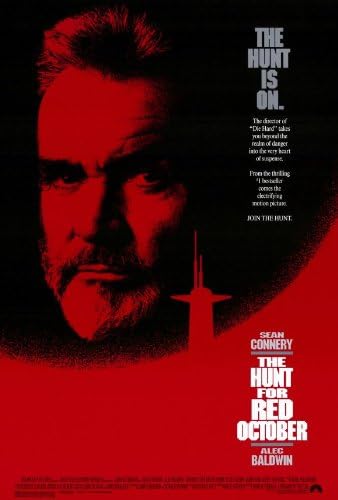 #1 in my Ranking of John McTiernan films.

This is comfort watching for me. It’s almost like I’m roughly 30 years older in that way. I don’t remember the Cold War, but there’s something about this Cold War adventure, with its threat of nuclear annihilation and full scale war between two super powers that tickles me. It’s also expertly crafted, a tight thriller, and full of great character moments that help elevate it above merely a thriller. It’s probably John McTiernan’s finest film.

There are a series of conflicts that feed into each other that drive the film. Marco Ramius is a Soviet naval captain given the reins of Red October, the newest first strike submarine that has a new propulsion drive that renders it silent in the water. Ramius’ motives are purposefully unclear for the first stages of the film, but it’s soon revealed that he and the officers of the boat are trying to defect to the United States with the submarine that was designed with only one purpose, to start a nuclear war. Against him is the Soviet fleet after Ramius sent a letter to an admiral, his uncle by marriage, declaring his intentions, making a “political statement”, as one of Ramius’ officers says. So, confronted with the idea of their most advanced Typhoon Class nuclear ballistic submarine going to the Americans, the Soviet navy sends out its entire fleet to find and sink the invisible sub before it reaches America.

On the other side is America itself. Ramius can’t contact the Americans directly without giving away his position, so he must rely on finding the right kind of American who will understand his motives. That American happens to be Jack Ryan, the CIA analyst who wrote a agency’s biography on Ramius and knows him better than anyone else in the West. Ryan has to piece together separate pieces of information that only he could know (like the date of Ramius’ wife’s death) to estimate that Ramius is trying to defect, not shower the East Coast with nuclear missiles, as the Soviet leadership has told the US. It becomes a race against the clock as Ryan heads into the North Atlantic to hop from an aircraft carrier to the USS Dallas which had been tracking the Red October since it left port. If he can find proof that Ramius is defecting, the American government will welcome him, otherwise Ramius is going to get “blown to Mars”.

The movie’s really well assembled from the quality of the sets and special effects to how it introduces narrative elements only to have them all pay off later. The mini sub shown as an almost throw away moments when Ryan visits a shipyard comes back and plays a key role. One of Ramius’ former students, Captain Tupolev, is introduced early when he’s given orders to sink the Red October and comes in at the last moment to provide an extra obstacle for the officers of both the Red October and the Dallas to overcome. Characters are really well defined. Despite most of the action taking place within three submarines, there’s never any question about where we are because of intelligent uses of color schemes that detail each sub’s interiors.

But, this being a thriller, the narrative thrust of the movie really does rely on its sense of tension. I think it’s expertly handled as the conflict materializes and changes over the course of the film’s first three-quarters, the ticking clock (not literally in the form of a clock, thankfully) and we’re left guessing along with Ryan, believing his conclusions and wanting him to convince the top brass around him (including Richard Jordan as the National Security Advisor and James Earl Jones as the CIA’s deputy director). There are also small character beats peppered throughout that enhance the action because of how much better we get to know the men at play. Captain Borodin and his visions of Montana, Ramius talking about his grandfather teaching him to fish, the story of Jones’ affinity for Paganini, and Ryan talking about the baby brother he needs to buy for his daughter’s stuffed bear are all little moments that provide greater humanity to the action in general. Sean Connery, Sam Neill, Scott Glenn, Alec Baldwin are all really good in their roles as well.

In terms of straightly told Cold War thrillers, this really is one of the best of them. It’s exciting, really well made, well-acted, and intelligent. It’s not only comfort watching, but high quality entertainment as well.

3 thoughts on “The Hunt for Red October”