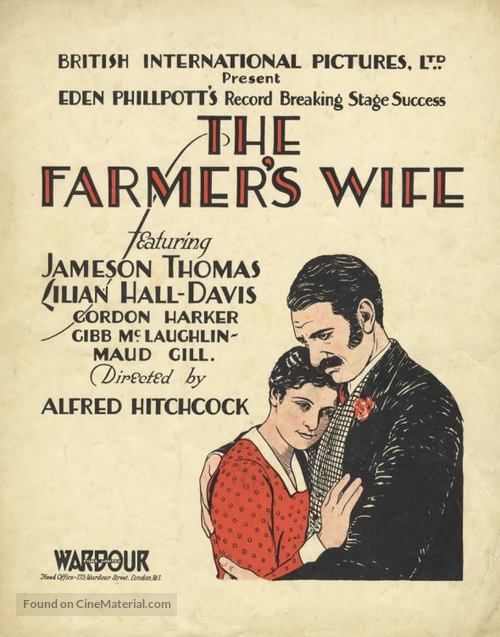 #22 in my Ranking of Alfred Hitchcock’s films.

Hitchcock’s silent career is mostly a window into the burgeoning technical skills of a future master. However, that beings said, there are certainly little gems in there that stand on their own as legitimate entertainments, and The Farmer’s Wife is definitely one of those. It stands apart from what Hitchcock had become known for and The Lodger had already demonstrated so well, but as a light romantic comedy, it’s something special.

Farmer Sweetland loses his wife to an illness and marries off his daughter in the opening minutes of The Farmer’s Wife. This puts him in the perfect state of mind to feel like he needs to find a wife. There are three eligible women who attend his daughter’s wedding, and he sets out to marry one of them, adding a fourth to the list because he suddenly decides to. The result of this quest is eminently predictable by simply looking at the young, attractive maid in his employ that he outlines this plan to. He’s not going to marry any of the four women he has her list on a little piece of paper, he’s going to marry her. And yet, the journey is such a delight along the way that it’s easy to forgive the film it’s predictability.

Each early film of Hitchcock feels like a technical exercise in some way, and this one is no different. Hitchcock uses fades repeatedly in the opening minutes to imply the passage of time, fading from one set of trousers drying by a fire to the next to show that much time has passed from his wife’s passing to his daughter’s funeral. The other thing he plays with is the use of double exposures to demonstrate fantasy, going a bit further than he had gone in Downhill. We see it as Farmer Sweetland sits in his chair by the fire and looks longingly at the empty chair across from him, picturing three of the four women in the chair in succession (the fourth doesn’t appear here, and to jump ahead slightly, I don’t know why she’s in the movie at all).

So, Farmer Sweetland goes out and has his inept interactions with the three women. The first is Ms. Windeatt, who dismisses Sweetland by saying that she’s simply too independent for him. He immediately breaks down and starts insulting her in her own house. The second is the thin spinster Thirza Tapper who turns Sweetland down right before her big party because she had sworn off all men forever. He proceeds to insult her. Then, at the party, Sweetland turns to the young and plump Mary Hearn, the small town’s postmistress, with whom he seems to have a good rapport. She ends up laughing off his proposal because of his age after which Sweetland proceeds to insult her. All through this, his maid, Minta, watches on and hopes for the best for her master whom she sees as kind and decent, eventually imagining herself in that seat across from him by the fire.

Then Sweetland goes to the fourth woman, the owner of the local pub, and we only see the beginning of their interaction and only the ending through a brief flashback several minutes later. Four women was simply too many (the rule of threes is a thing and has its uses), so I get the feeling that she was largely cut from the film in editing.

Of course, the movie ends where we’ve been predicting it would end from about minute five when Minta was introduced, and Sweetland sees the error of his ways and decides that he doesn’t want an independent woman who will talk back to him, but his maid who will keep after his jacket even after he proposes to her. Hey, the movie was made in 1928.

Still, it’s airy, light, and fun. A delightful little romantic comedy that attacks the viewer with several different types of comedy well. It’s a fun diversion and another small victory for Hitchcock early in his burgeoning career.

3 thoughts on “The Farmer’s Wife”